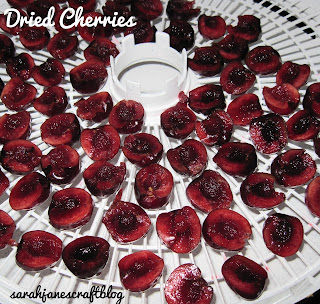 Cherries were on sale last week.  $1.98 a pound.  That's about as cheap as they get around here.  My husband loves cherries and loves dried fruit.  So we gave dehydrating cherries our first try.  We bought two big bags of cherries, rinsed them off, and pulled their stems.  Then we set about pitting them.  If you want to stay sane, you'd better use a Cherry Pitter, but if you're a glutton for punishment, you could slice them in half and pry the pit out of every little cherry.  Once they are pitted, we sliced them in half and set them on the dehydrating trays.  I was surprised that we used both bags to fill our dehydrator. I was also surprised that it took so long for them to dry.  We left the dehydrator running for about 30 hours on the fruit setting (135 degrees).  Some of the cherries were still a bit tacky, but the smaller ones were dry to the touch.  They come out looking almost like big raisins, but not quite as shriveled. 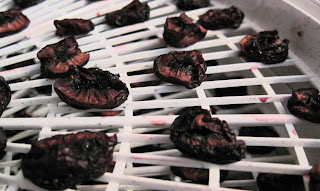 When we were all done, the two big bags of cherries dried up into a single quart sized zip top bag.  They turned out pretty well, but they took forever.  Most of the online articles I read suggested drying times of 12-16 hours--we were about double that.  I wonder if slicing them into quarters would help, or maybe the humidity in the air had an effect? At any rate, I'm glad to put another fruit into our drying repertoire. 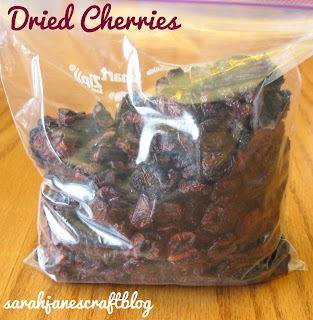