I received a package of alcohol inks for Christmas and then bought a second set with a 50% off coupon at Michael's.  I've used them now to make coasters and to decorate some candle holders.  I was just getting my sea legs with these inks to begin with.  I applied the ink directly onto the surfaces and played around with rubbing alcohol as a blending solution.  But I thought it was high time that I used an applicator to use them the way they were intended.  Of course, the applicator is just a stamp with some velcro on it and it costs 6+ dollars....not to mention buying the pre-cut pieces of felt. So I figured I'd make my own.  I was very much in a use what you've got mentality, so I grabbed a scrap piece of wood and a couple of strips of velcro (hook and loop tape).  I used the hook side and lined two pieces up next to each other.  Luckily they were just the right width. 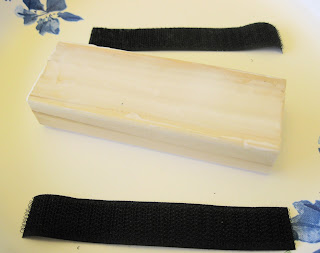 I had the sew-on kind of velcro, so I spread some tacky glue thinly onto the surface and glued it down. Then I used the block as a guide to cut a few pieces of felt the right size (any light color will work--you just need to be able to see where you've applied the ink).  Once the glue has dried, I stuck the felt right onto the velcro--worked like a charm. [Update: I've posted a tutorial just for the DIY Applicators.] 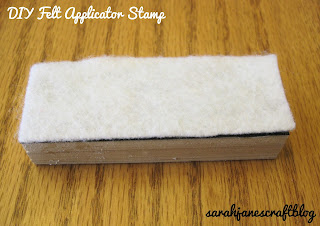 Next, I set up my alcohol inks and a paper plate to work on. I have the Farmer's Market set and the Nature Walk set.  The alcohol ink is an alcohol soluble dye, so it will stain.  If it gets on the table, wipe it off with some rubbing alcohol before it sets completely dry. 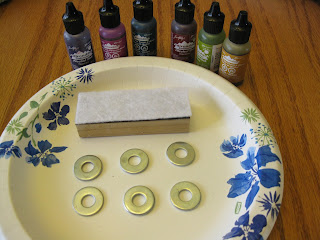 I squirted multiple colors of alcohol ink into a portion of my applicator (since I was working on small washers) and stamped away.  The photo below is what the washers look like after stamping over them twice.  You can continue to stamp until you get the look you're going for. 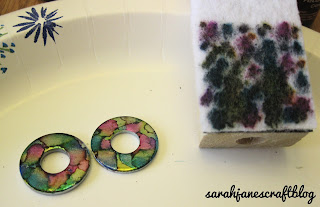 These were so easy, and I ended up with such pretty results so quickly that I made a bunch of them.  I let them dry for a few hours.  Be aware that the alcohol ink gets a bit darker as it dries, so if you think your washers are turning out too bright--give them some time. 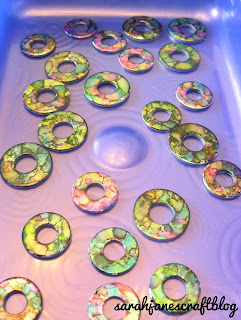 The above photo was just at the end of my stamping session and the photo below shows darker hues after they have dried and I had sprayed them with some clear acrylic sealer. 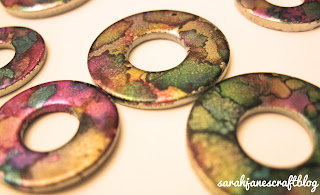 Then I strung them up on some beading cord and tied the ends.  I would have put a bead above the washer, but I didn't have any on hand that both pieces of cord would fit through, so I may pick out some beads for my next batch.  I think they turned out great and they were so much fun to make. 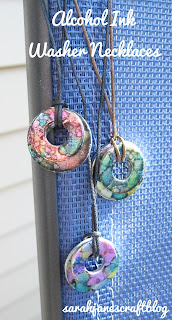 Update: I revisited this craft with different ink colors and with attempts at glazing the surface of the washers.
alcohol inks jewelry most popular posts washers