Hubby's work was having contests this Halloween for costumes (he is going as Corporate Darth Vader--Vader wearing a shirt and tie) and treats and decorated pumpkins.  He didn't have a clue what to bring for a spooky treat, so I pulled up my Halloween pin board and thought that the witches' fingers made out of dipped pretzel rods with almond fingernails would be easy and cute. 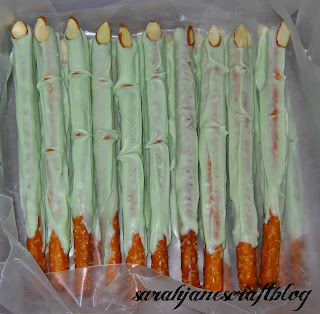 To make your own you'll need:
A bag of pretzel rods
A package of almond bark
Food coloring
A microwave safe bowl
The smallest bag of almond slices that your grocery store sells
Wax Paper
Spoon

The inspiration used green colored candy melts.  The comments discussed peoples' problems dyeing white chocolate with liquid food coloring.  I opted for almond bark and made a test batch for the coloring just in case.  The almond bark is artificial enough that it doesn't seize up or get thick when using liquid dye.  I melted half the big block (six cubes at once) and used 3 drops of green and one drop of red (so it looked a bit more brown instead of pastel).  I would have liked to try going even greener, but I didn't want to risk it. If you do use white chocolate, you could probably dye the chocolate with paste dye without having problems with it seizing up.

After figuring out the dye, dripping/dipping on the chocolate was easy enough.  I smoothed out the excess with the back of a spoon and put the almond slices on the tips immediately after I put them on wax paper to set.  I couldn't get the knuckles drawn on the way that the inspiration did. It didn't work at all right after it had been dipped, and when I waited until it had set up a bit, all I could manage was a sloppy line with a butter knife...so the knuckles are a bit crude.

I think they turned out pretty cute for my first poke at them--and no matter what, they taste great.  I hope you all have a great Halloween!

Posted by Sarah Jane at 1:07 PM No comments: 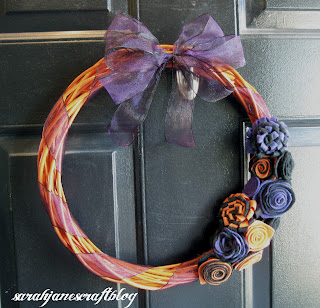 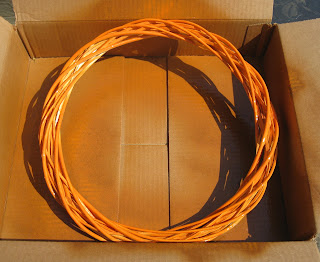 After I successfully painted the wreath orange, I opted for making some orange and black felt flowers since the orange would be lost on the background of the wreath and the black would be so dark that you wouldn't be able to see the details.  Cut two circles of felt the same size and stack the strips up as you roll them up. (For more pictures of this process, see my first felt flower project)  The flower below started with two circles about 4 inches in diameter. 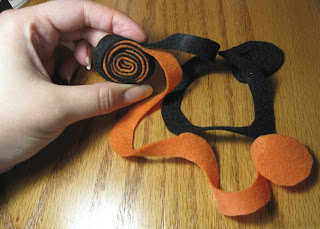 Once the felt has been rolled up, glue it all together on the bottom with some hot glue or fabric glue. 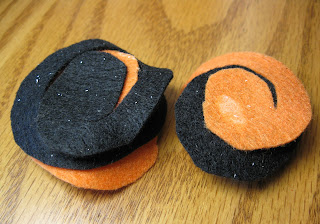 I liked the orange and black flowers so much that I decided to make some black and purple ones too.  After you've created a bunch of flowers, attach them to your wreath in a pleasing fashion.  I decided to also add some leftover translucent ribbon (which can be added before or after your flowers--ah the magic of hot glue!).

This wreath ended up costing just a few dollars when all was said and done and the only trouble I ran into during the project is that I added so many flowers, that the wreath didn't want to hang straight. :) 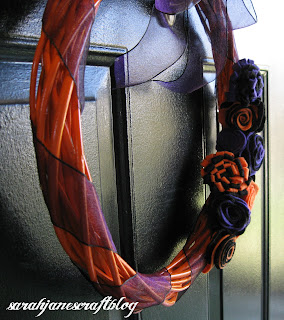 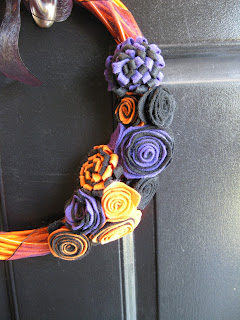 Posted by Sarah Jane at 4:56 PM No comments: