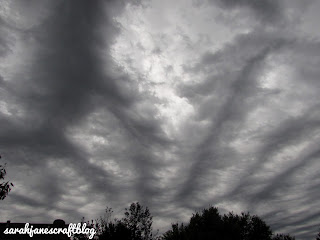 School has just started back up here, so the only thing I crafted last week was a solar eclipse viewer--a pin hole box. On solar eclipse day, it looked like the above photo for most of the morning. It rained almost 3 inches that day. We needed the rain, so it was hard to be upset about it, but we were supposed to get a 95% eclipse, so it was a bit of a bummer. 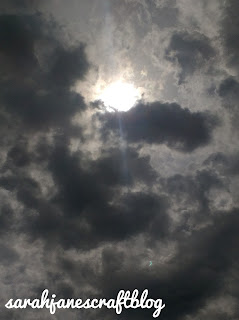 Right around the time the eclipse was supposed to be peaking, the sun started popping out here and there between the clouds. The photo above is from about 5 minutes before the sun hit 95% here....so 90% plus :). Some folks even were able to see the crescent with the clouds as a filter. But I did notice, after the fact, that a solar flare in the photo down near the bottom shows the crescent quite clearly. It's amazing how much light comes off of such a tiny sliver of the sun. 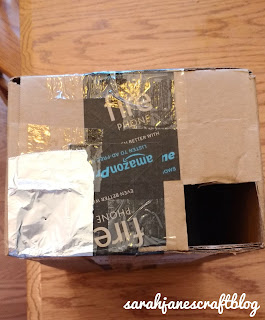 So when it looked like I might be able to see the eclipse, I quickly whipped up a pin-hole viewer. I'm glad I did. It was really easy, and I was eventually able to see the crescent in the box. All you need is any cardboard box. Put a piece of white paper on one end (I just scotch taped a piece of copy paper in the box) then on the other end, cut a hole in one side to view from and a hole in the other side for your pinhole. You could, theoretically, just jab a pin through the box, but tinfoil works very easily and can be pierced with a paper clip or tooth pick too. Tape the tinfoil in place over one of the holes and leave the other one open. If you had any open flaps on the box, tape them all shut and that's it. 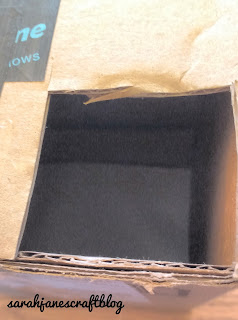 After taking my box outside, I added some foil over the corners near the paper and across the seam on the top to keep even more light out, but I could easily see a cloudy light blob in the box immediately, even with a little bit of light getting in the box. Stand with your back to the sun and tilt the box until you see a defined light. At first, I was getting the shape of the poked hole. If you tilt it, you'll eventually see the light from the sun. 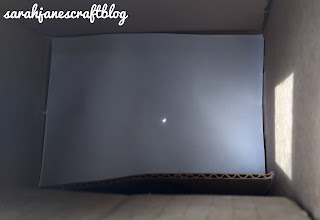 Every time I saw the sun start to peak out, I ran out and looked, and eventually, towards the end of the eclipse, I finally saw the crescent. 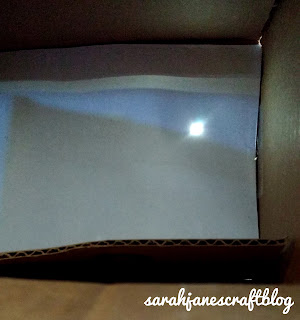 Just for reference, this is what the sun normally looks like through the pinhole on a nice sunny day. Now that I know how to make one of these boxes, I can't wait for my next chance to view the solar eclipse--but who knows, maybe for the next one, I'll be able to track down a pair of the elusive eclipse glasses. :) 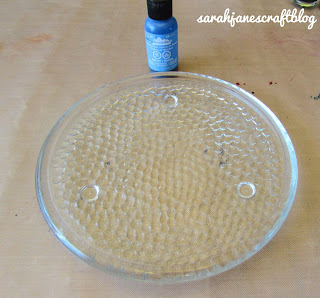 Just sharing a really quick project with you today as school is starting this week. A few months ago I grabbed this textured candle plate at Dollar Tree with the intention of figuring out a way to ink it. Well, after living with it a while, I decided I really liked the texture and didn't really want to obscure it with color, so instead, I just jazzed up the edge a bit. 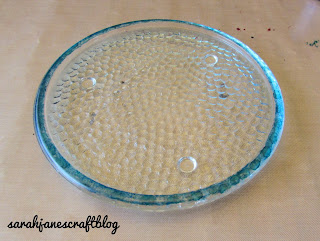 I grabbed some of one of my favorite colors of alcohol ink--sailboat blue--and my craft mat and applicator. I dripped some blue ink onto a felt and stamped around the edge of the plate until it started to separate just a bit and created a sort of mottled look, but still had good coverage. 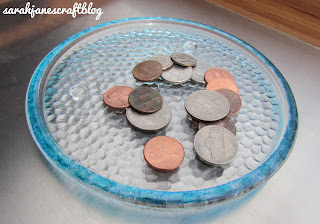 Then I let it dry and that was it. It was a super simple project. I plan to use the candle plate as a catch all for jewelry or coins, but you could certainly still use it for candles. If it's going to be in an area near hairspray, perfume, or alcoholic beverages, be sure to seal your creations with mod podge or clear acrylic spray so the ink doesn't run. 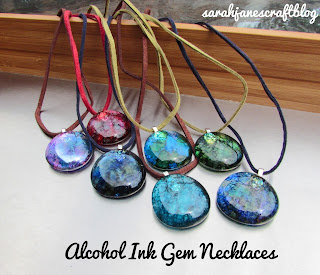 My most popular project on this blog are these glass gem necklaces. I have revisited and rehashed this project several times in an attempt to perfect it and create new versions. In today's latest version, I hope to answer some of the most frequently asked questions and--in a first for this blog--I've included a video of the stamping process. 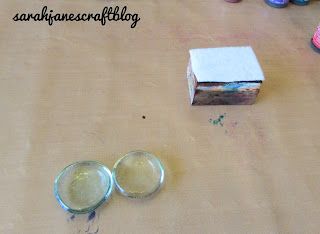 These are pretty easy to make. All you need are alcohol inks, a surface to work on, an applicator and felt, and some larger flat glass gems. 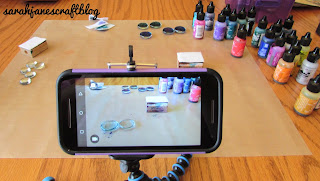 I didn't have a fancy set up--just my cheap cell phone camera on a tripod pointed at my work surface, but hopefully seeing the process will help answer some of the questions folks have about how long to stamp and what it looks like as you're stamping. If it's not dark enough, keep stamping and layer in my colors until you like it.


This is raw from my phone. I took a few different videos and picked the one that showed the most without too many hiccups--so no editing. I'll get the hang of this stuff eventually, but I thought you'd all like to see what the gems look like in process. 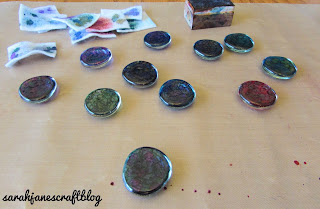 I've also included a picture of the gems drying with my pile of felt so you can see approximately how much ink I used and how many felts are used to create 11 gems. After the ink dried, I painted on a thin coat of glossy mod podge (I've also used a clear acrylic spray to seal them) and then used E6000 glue to attach bails. Then I threaded them with ultra suede cording. 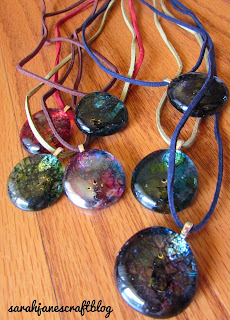 I also wanted to include a picture of the necklaces completed on a darker surface. Sometimes the images are misleading in how much contrast appears on the gem. They are still very translucent. If you're not liking the look of the see-through color, you may want to consider backing the gems with paint or foil tape to get the colors to pop. 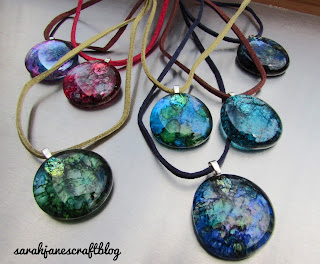 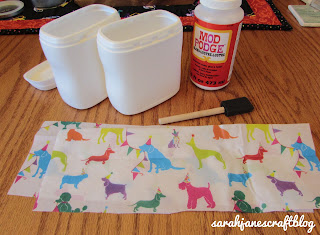 It's been awhile since I covered a French's Fried onion container. Long enough that I had two empty ones in my recycle craft box. So it must be time to whip a couple up. These containers are the perfect size to store bits and bobbles and the lid sits on the top securely, so I just can't throw them out without re-using them. The tricky bit is that they are curved, so aside from just leaving them white, mod podge (or other decoupage glue) is a must. Tissue paper is one of the easiest things to decoupage that will curve a bit. You could also use decorative napkins in much the same fashion. I cut two strips of this silly dog birthday tissue paper that I picked up at Tuesday Morning to the size to cover my containers and grabbed a foam brush. 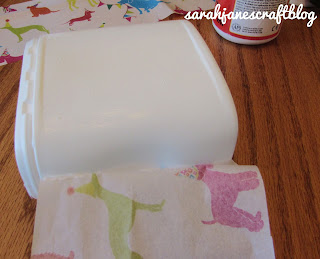 I usually start these on the side seam in the plastic. I just spread a very thin layer of glue and curve the paper along the surface. Be sure to keep the top straight and avoid getting your fingers too glue-y or they might stick and rip the paper. 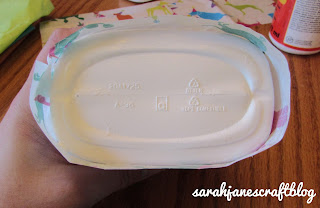 I like to let the edge hang over and then glue it down. But you could trim your paper (or be more precise when you cut out your original square). I just use the foam brush to put down some glue and then fold the paper over the edge. 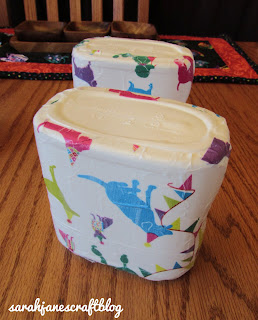 Since the bottoms had glue on them, I left them sitting upside down on their top openings to dry just long enough for the tissue paper not to be wet and fragile. Let them sit for 5-10 minutes or over night, but let them set up a bit before spreading on a layer of sealing glue. 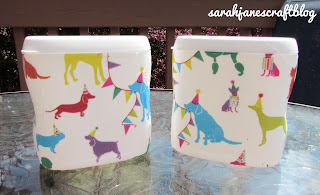 Now I have two more cute storage containers. These are going to be used for dog treats. I think my pup will approve. 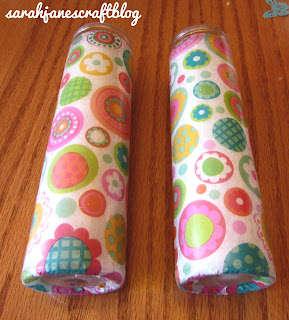 After this week's project where I punched butterflies out of tissue paper for a candle holder, I had leftover butterflies. They're fragile, so they are hard to store and keep for later, so I thought I'd use a few of them to jazz up this old project (pictured above). The colors matched the pattern on the tissue paper perfectly. 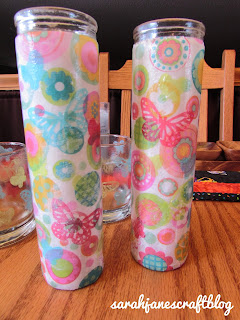 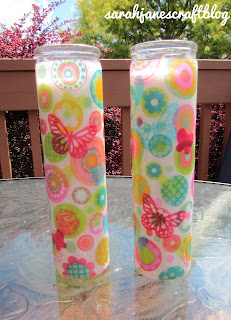 The butterfly additions are pretty subtle. The lime green ones disappear almost entirely, but it's nice to add another layer of dimension to an old project to freshen it up.