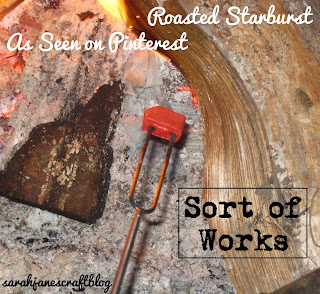 This spring, I started seeing a photo someone posted of roasting a Starburst circulating Pinterest.  My first thought--yum! My second thought, well, how does that work?  So, when we went camping last weekend, I used the opportunity to give this post a whirl.

I had lots of questions that I was seeking to answer, so here's what I found out:

Do the Starburst roast?  Not really.  They mostly just melt.
Do they caramelize? A tiny bit, but as soon as they get warm, the starburst start dripping off of the fork.
Does it catch on fire?  Nope.  It just melts off the fork. We sacrificed one to find out....it will completely drip off the fork and won't catch on fire.
Is it too hot to eat?  At first perhaps. I waited about a minute after bringing mine out of the fire before eating.
Does it come off the fork?  Yes, it leaves less residue than a marshmallow if you let it cool a minute before pulling it off.
Does it taste good?  It tastes like a warm-gooey Starburst, so yeah, it doesn't taste too bad. :)

So yes, you can put a Starburst in a fire and then eat it (assuming you don't leave it in too long and it drips completely off the fork), and yeah, it tastes good, but it doesn't "roast" or caramelize (at least not very much).  Will I be bringing Starburst camping on a regular basis?  Probably not.