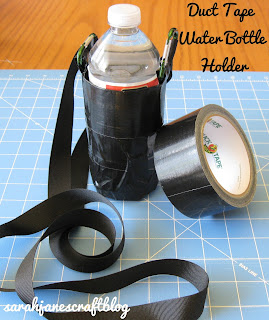 I've been searching for a simple, cheap, and easy solution to carrying water bottles with you when you're hiking or at the county fair.  I knew I could sew a holder, but stitching in that small round bottom made it seem a bit like too much work for what it's worth.  But then I figured it out--what's waterproof, downright super strong, and easy to shape, and cheap?  Duct Tape! 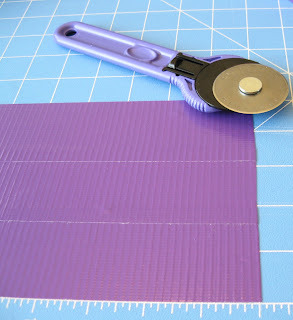 After making a few prototypes, I decided that I needed a form that was just slightly bigger than the water bottles we buy (I tried the first one using the water bottle as a form--but it was too snug to remove.  You could always wrap your water bottle in some newspaper or something to make it just a smidge bigger too.)  I decided on using a large (16 oz) Mod Podge Bottle as my form.  Then I made a sheet of duct tape out large enough to cover the bottle out of three strips.  The sheet was 10 inches wide and 5 inches tall.  A cheap rotary cutter works great for trimming all of the edges so that they are straight, and working on a cutting mat makes it easy to peel the duct tape off after you've created your sheets. 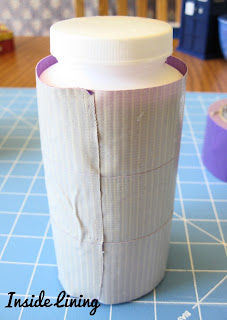 I carefully placed the duct tape sheet on my form (the glue bottle) sticky side out to form the inside lining of the water bottle holder. 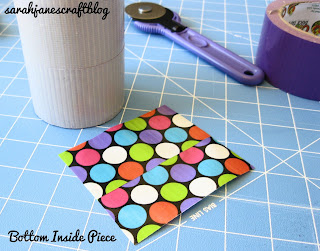 Then I created the bottom inside piece.  I used a patterned duct tape for a secret pop of color (I tried using the patterned tape on the outside for one of my prototypes, but the mis-matched edges and wrinkles made the pattern look bad--so I stuck with mostly solids for my final holders). 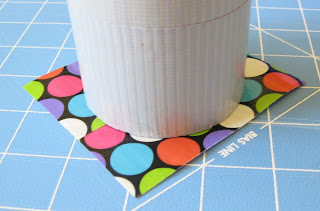 I set my form with the sticky tape on top of my square of duct tape to cover the bottom and create the inside of the water bottle holder.

Then I  flipped the form over and covered the bottom with another square of duct tape--this time facing outward--to create the bottom of the water bottle holder.  Don't worry if the edges are a bit messy, they'll be covered up later. 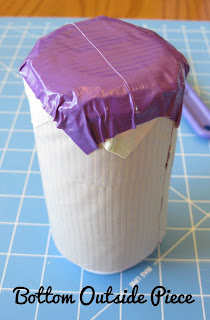 Next I made the loop straps. I folded a piece of duct tape into thirds and then cut it in half (these are 3 and a half inches long--longer works fine too if you want to tape even more of the strap to the bottle for durability).

Then I folded the loop straps in half and taped them on opposite sides to the top of my form with about a half of an inch showing above the top edge of the water bottle holder. 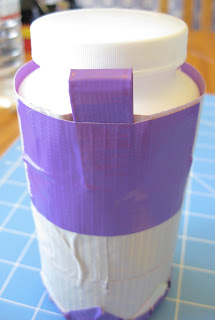 Then I cut another piece just like my first liner piece--10 inches by 5 inches--and carefully placed it over the form to cover everything as your outside piece.  I then cut a piece of duct tape in half widthwise and used it to cover the top edge between each of the loops.  I just folded it over the edge to finish it off. 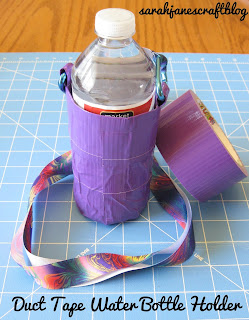 After the duct tape base is done, you can clip a strap to to your loops. I used some small carabiners to attach a grosgrain ribbon strap to the water bottle holder, but if you have a spare bag strap with clips on it, that would work great too.  If you didn't want to use the carabiners you could put some D-rings into the loops when you tape them to your bottle too. I liked the idea of using the carabiners so I could change the straps to different lengths or colors very easily, and they also allow you to clip other stuff to your water bottle holder. The only design issue with these holders that I've come across so far is that in order to make them a size that's easy to take the bottle in and out of, there isn't any grip or anything to keep the bottle from falling out if the holder is tipped over.  If anyone has any ideas, let me know! Happy taping!
camping duct tape