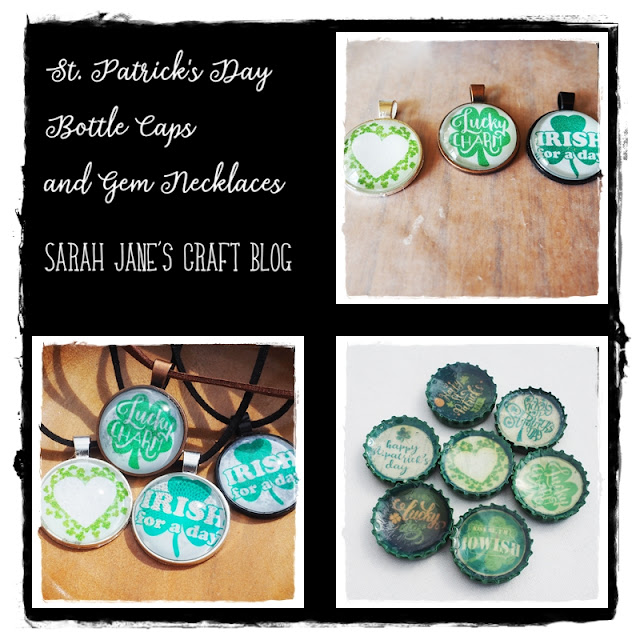 This post is a tale of two projects--neither of which went according to plan. But, after last week's shamrock sun catchers, I was in the mood for another St. Patrick's day craft. 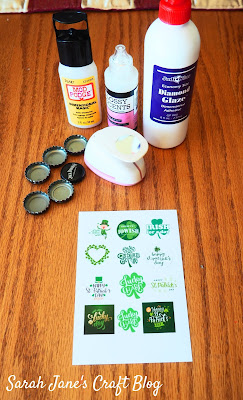 I decided to try to make some bottle cap pins. I thought it might work out well to print the thumbnail art on photo paper for a crisper image. So I shrunk a bunch of clipart I found through google searches down to one inch sizes and fit them onto a 4 x 6 sheet of photo paper. I printed it out on my ink jet printer and left the sheet to dry for a day before working on the rest of the project. 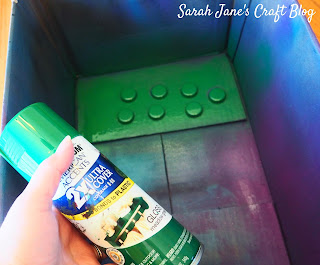 Next I took my bottle caps from various sodas and adult beverages and spray painted them green both inside and out. 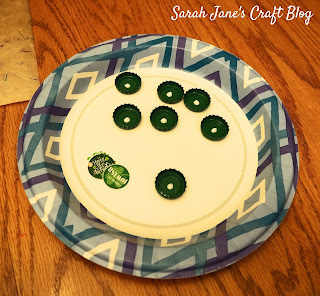 Then I punched the art out with a circle punch and selected the ones that looked the best and glued them into the bottoms of the bottle caps with some paper glue. 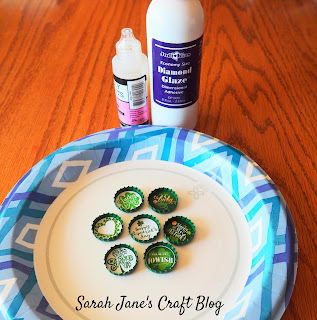 I let that all dry over night before adding my glazes. I used some glossy accents and diamond glaze to fill the bottle caps with glue. Be sure not to shake the bottles before applying glue and leave the tip in the glue as you squeeze it out to minimize bubbles. 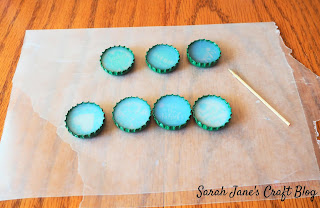 I popped any large bubbles with a toothpick and used a lighter to pop small surface bubbles. 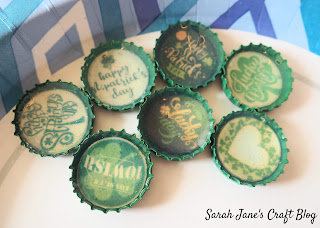 After letting them dry for a couple of days, they did not turn out. There were lots of small bubbles and several of them had large indents or craters where the glue dried unevenly. I added glue to the tops of them all and let them dry again to smooth the glue out, but they just weren't clear enough to see the images.

I selected a some black bottle caps from my stash and tried to give it another go with the paper I used in previous bottle cap projects, but this batch wasn't dry in time for the post. I'll update if these turn out. They look better than the first attempt, but the glue was still cratering quite a bit. 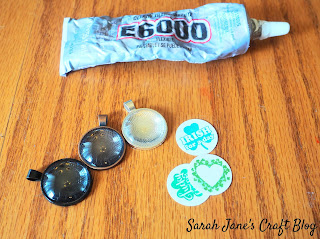 So I switched gears. I recently bought a pack of cabochons and bezels (glass gems with settings) off of Amazon, and the circle I punched to redo the bottle caps were the exact right size, so I thought I'd make a few St. Patrick's day necklaces. 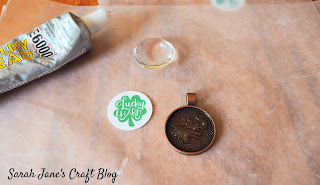 I glued the paper down onto the bezel with a small amount of the E6000. I let them dry long enough that the paper no longer twisted in the bezel and was firmly stuck in place. 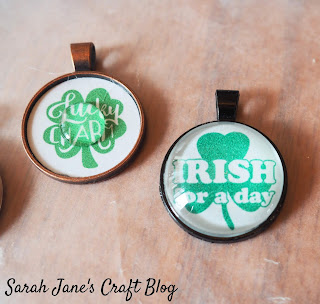 Then I put a pea sized drop of glue in the center of the paper and pushed the cabochon gem down until the glue was evenly distributed (and sometimes a little would ooze out along the edge, but it can be wiped off). 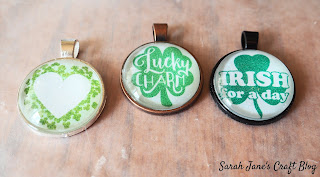 After I glued all the gems down, I left them to dry for a couple hours. 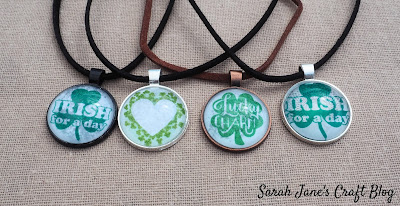 When I came back, some of the paper had gone a bit translucent from the glue, but I strung them up with some faux suede cording anyway. Hopefully that wet paper look will diminish as the glue cures. If it doesn't, I'll have to figure out a different paper or type of glue for those bezels. At any rate, I'll be set for wearing green on St. Patty's day. I hope your projects go a bit more smoothly this week than mine did.