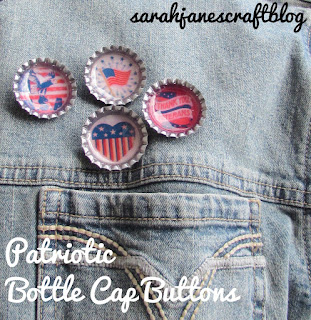 I've made a couple sets of magnets with bottle caps in the past. I saved my own bottle caps from a variety of beverages and spray painted them when I made the magnets, but I found some crafting caps at Tuesday Morning for $1.99 for a bag. They were navy blue, so with Memorial Day coming up, I thought it would be a great opportunity to make some patriotic pins. 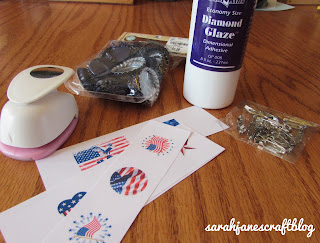 So I searched the internet for some images that would be the right size and shape. I inserted them into a Word file so that I could size them to 1 inch. I printed them out on some matte photo paper and then cut them into strips so that they could be cut out with a one inch circle punch. 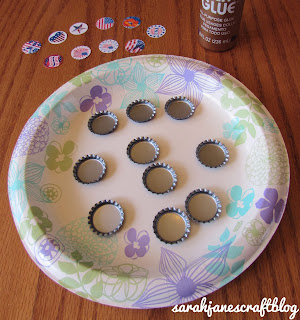 After the circles were punched, I used some Tacky Glue to glue the circles into the bottle caps. Any glue that would keep the paper from floating up in the Diamond Glaze is fine. 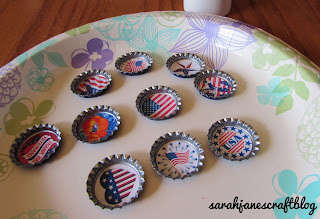 After they have been glued down, let them dry for a few minutes to make sure they won't float. 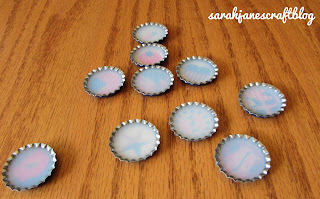 Then fill the caps with the Diamond Glaze. There will be bubbles. If you squeeze the glue out steadily while turning the bottle cap and don't lift up the nozzle, you'll get fewer bubbles. Larger bubbles can be popped with a toothpick, but smaller bubbles will be stubborn. I had to tap and gently shake the caps until they rose to the surface. As the glue dries, more bubbles will float to the surface. So check on the caps after a half an hour and tap them out again. 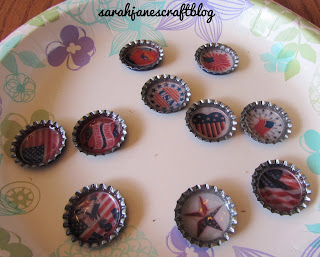 The Diamond Glaze takes several hours to dry. I left mine overnight to dry. By the morning they were completely clear. 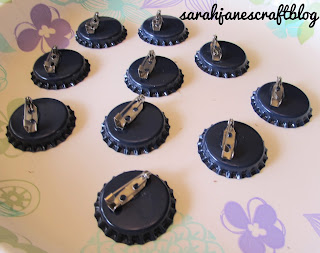 Then I used some gel super glue to glue some pin backs onto the back of the bottle caps. 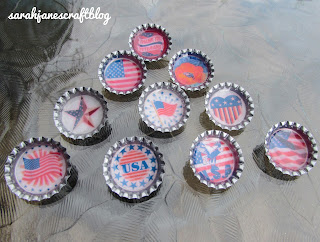 When they dried, they were ready to be pinned on your favorite Memorial Day or Fourth of July weekend outfit. I found the images with the most color seemed to work the best. The white paper turned a little translucent in the glue. A different kind of paper may help this issue. Let me know how yours turn out in the comments.