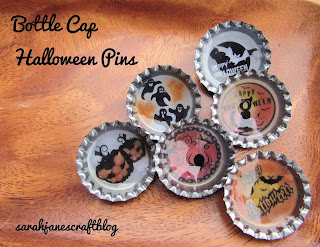 I have been wracking my brain all week trying to figure out what to do for this week's craft post. I knew I wanted to do something Halloween-y since the post is set to go up the day before. After much hemming and hawing, I remembered I still had a bunch of the craft bottle caps I used to make Patriotic Pins with last year, so I set out to make some Halloween/Fall pins. 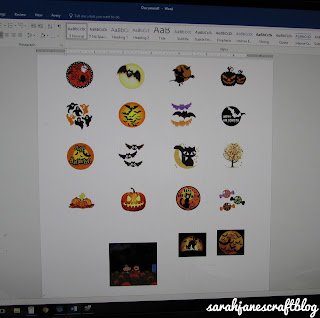 The bottle caps are 1 inch on the inside (as are the kind you salvage off glass soda bottles and beer bottles--so both will work). I did a google search for Halloween art and chose ones that I thought would look good as 1-inch circles. I probably saved twice as many designs to my computer as I ended up printing. The icon size ends up being a good indicator of what will look good in the small size. Then I use Word to print them out. Word has a handy feature that will tell you how large the photo is in inches when you're resizing it, so I made all of the photos a smidge smaller than 1 inch tall and wide. 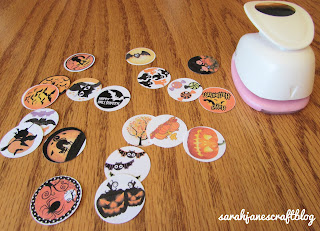 I printed the designs out on some copy paper that's 24lb instead of the standard 20lb. The fancier stuff also is a bit smoother than regular copy paper--so it prints color a bit better. You could use cardstock or matte photo paper instead if you have it laying around. Then I used a 1-inch circle punch to cut the pictures out of my paper. A few get eliminated in this process because they are a bit big or a bit small or just look odd as circles or maybe I might mess up the punch and it's off center....but for whatever reason, start with more designs than you end up hoping to make. 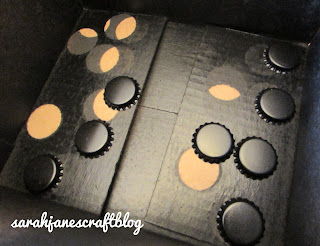 My bottle caps were navy blue, so I knew that wouldn't really work for Halloween pins. I flipped them over and sprayed them with a couple of coats of semigloss black spray paint and let them dry before the next step. 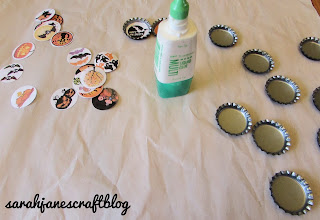 Once my caps were dry, I could glue the pictures into the caps. I used Tombow Mono Multi Liquid Glue. Any glue that is multisurface and doesn't make paper bubble or wrinkle, would work just fine. You just need to get the paper stuck to the bottle cap so it doesn't float up when the glaze gets added. 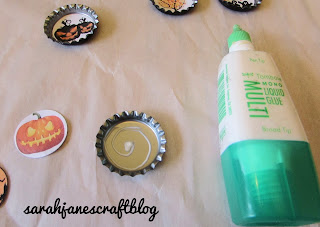 This Tombow glue is very sticky and works really well with paper, but it's not very much fun if you use too much. Excess does not come off easily and stays very sticky once dried, so use just enough to get the paper to stick but not so much that you end up with ooze. 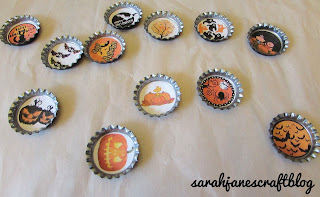 After I got all of my selected circles glued down (I whittled the pile down to the ones that looked the best in the caps next). I made sure they were all secure and tried to wipe up any tiny bit of glue that may have squeezed out. 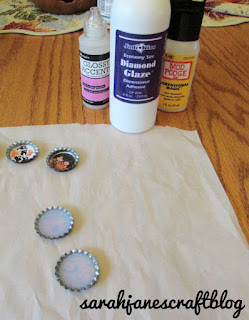 Then I grabbed my glaze. I have a big ol' bottle of Diamond Glaze, so that's what I used. You could also use Glossy Accents, Dimensional Magic, or Paper Glaze--whatever you can get a hold of to provide that nice glossy seal. 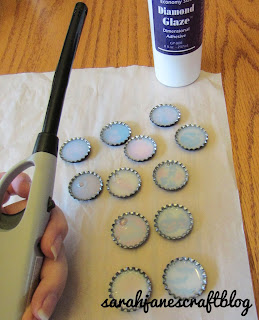 There are always bubbles with this stuff. Try not to shake the bottle before use, apply the glue in a steady stream without lifting the nozzle out, and use a long neck lighter to pop bubbles after you've applied the glue. You can also use toothpicks or pins or tapping the bottlecap gently on the table to try to pop bubbles, but the lighter is the fastest option. 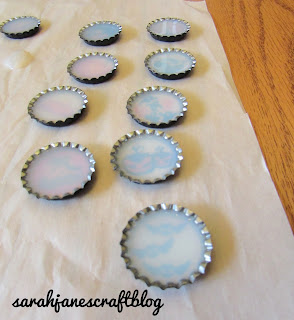 After I used the lighter on the bottle caps, there were only a couple of tiny bubbles left. Unfortunately, the bubbles tend to surface as the glue begins to dry. Check it every 20 minutes or so of the first hour before the glue sets to pop any additional bubbles. I went on a Target run and missed popping some of the bubbles until the glue was beginning to set on the top. 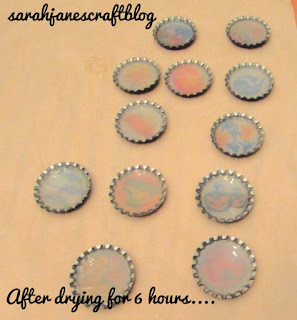 Sadly, the glue had not dried by 11pm the night before this post was due to be put up, so we had to wait until the next day for them to finish drying. 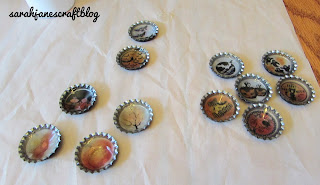 By the next day, the glue had dried clear. The orange/yellow printer ink seemed to run on several of the pins. The ones that were predominantly yellow/orange seemed to fair the worst. I'm not sure if this is because I'm using generic ink right now, or not. 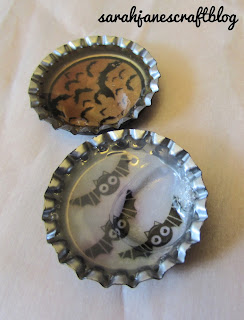 And a couple of the pins looked like I had stuck my thumb in them while drying--I did not, by the way. I think this was from me trying to use a lighter to pop bubbles after the glue had started to set....so go easy on the lighter. Maybe only use it to pop bubbles that appear right away and use a pin or toothpick to pop any after that.

So, after eliminating some because they didn't print as well or cut as well and some because they didn't come out after the glaze, I was left with 6 pins. And let's face it, I probably didn't need more than that anyway. :) I used some E-6000 to glue the pin backs on (super glue works too, but it turns the backs white). The E-6000 takes at least a half an hour to dry to be handled, but I'd wait several hours before trying to pin it to a shirt to make sure the pin back doesn't pop off while the glue is still a bit soft. 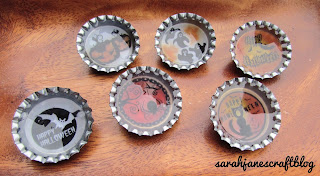 After some snafus and LOTS of drying time (between the paint and the glues), I can't wait to wear these pins for many a Halloween to come. Happy Halloween everyone--try not to eat too much candy! :)