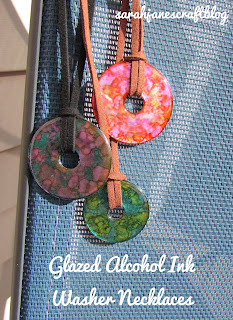 Though gem necklaces have overtaken them as the most popular post on the blog, the washer necklaces I've created with alcohol ink are still some of my most visited posts. I was surprised at how long it had been since I had tried something new with or revisited washer necklaces, so I picked up some washers at the local hardware store and decided it was finally time to try glazing again. A while back, I tried using Diamond Glaze (one of the resin type glues on the market), and they didn't turn out very well. Way back when I first started the blog, I had some success using Paper Glaze with some washers decorated with scrapbook paper, so I knew I could get a better result on washers. Since I didn't have any Paper Glaze (and the smoother surface might not work out as well as one covered in paper), I tried out some of the Ranger Glossy Accents. 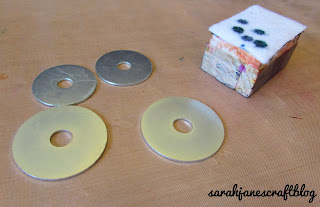 So I started the same way I would any time I make washer necklaces, with a craft mat, some alcohol ink, and a felt applicator. I applied a few drops of ink to my felt and stamped a base color of blue and green on 3 of my washers. I stamped until the ink started to separate and create little bubbles. Then I switched to the other side of my applicator and added a few drops of purple. I made one of the washers nearly all purple and then used it as an accent color on another as it was starting to dry out. Then I changed felt and continued to add colors until I liked the way my washers looked. In the process, I made one with an orange and yellow base just for something different. 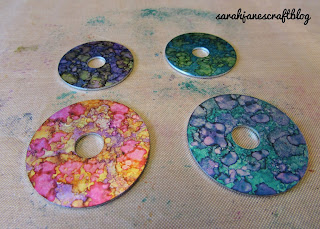 After applying pink to the orange washer and some of the yellow to one of my green and blue washers, I was good to go. I only made four washers this time since my main goal was to test the Glossy Accents glue. All of these glazes are glues that imitate resin. Resin is smelly, expensive, and much more difficult to work with (from what I've seen), so I'm trying all of the glue products before I try working with resin. 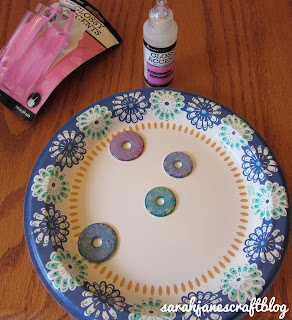 After the ink dried on my washers (usually just takes a few minutes, but I left them for a few days before I put on my glaze), I used the Glossy Accents to apply a ring of the glue around the washer. Make sure not to shake the bottle before you apply the glue, and the glue seems to acquire fewer bubbles if you glue in one constant stream looping around the washer without picking up the tip or stopping. I tried not to get too close to the edges of the washer or the center since I had such a big problem with the glue oozing off the edges the last time I tried. The glossy accents seemed thicker and less prone to bubbles as I applied than the other glazes I've tried. I was very hopeful as I left them to dry. 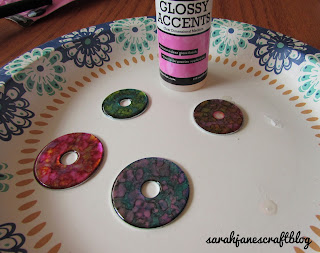 The next morning they dried from their cloudy color to a hard, clear, glossy surface. I noticed one of my washers had oozed into the center and that the colors seemed a bit blurred by the glue. Though, I was generally impressed by the glossy accents for this particular project. The glue seemed thicker and dried glossy and clear, but it did react with the alcohol ink a bit. 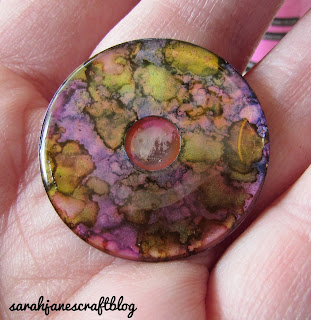 You can see in the close up of the one that oozed into the center, how the glue looks a bit pink from the alcohol ink. Also, the glue didn't settle as much as the thinner varieties, so if I overlapped my glue trails it was thicker, and in the areas I didn't quite go to the edge, it didn't spread or run to the edge--this is good because it is less likely to run over the edge, but definitely something you have to be careful about when applying. 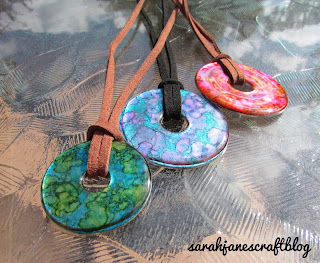 In the end, I got three pretty necklaces out of the batch and I think the Glossy Accents worked better than the Diamond Glaze for these washers. I may try sealing the washers before adding the glaze glue the next time so there's something with a bit of texture for the glue to latch onto and so that the glaze doesn't muddle the colors. I'll keep you posted on how it turns out!