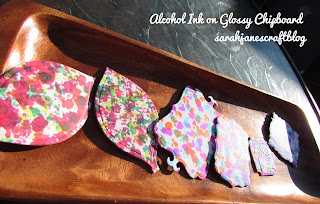 I have a bit sickness, a crafty sickness, where I look at something--any random thing--and find myself asking the question, "Can I ink that?" This was totally the case when I was emptying some packaging and saw these small pieces of thin chipboard that had a slightly glossy white surface. Chipboard is the thin cardboard that's used in cereal and cracker boxes, but this chipboard was even thinner. Because of the glossy white surface, I thought stamping them with ink might just work. 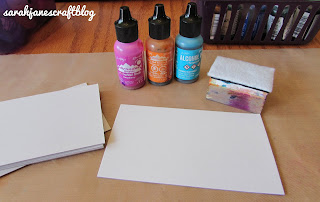 I took out my alcohol inks, a craft mat, and my homemade applicator (it's just a block of wood with a piece of double thick craft foam and the hook side of hook and loop glued on top). I chose some bright colors and got to work. 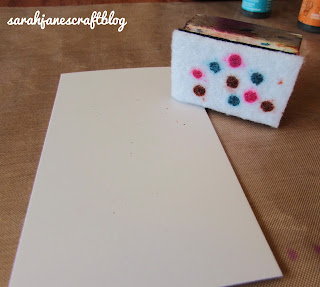 I randomly dripped a few dots of each color onto the felt square that I stuck onto the velcro of my applicator. 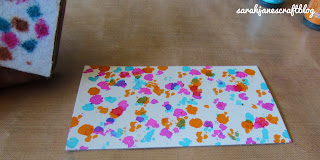 Then I stamped over the surface of the whole piece of cardboard. It felt like there was just a bit too much white space, so I went over it again. 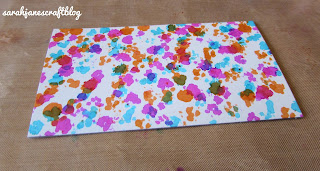 After my second pass over the cardboard, I felt like it looked a bit like a confetti design and decided it would make a great gift tag. 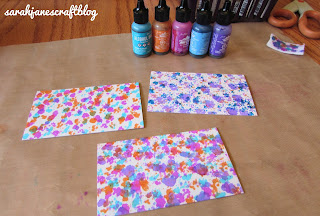 I continued stamping by adding purple and blue to the mix to create three different bright variations. 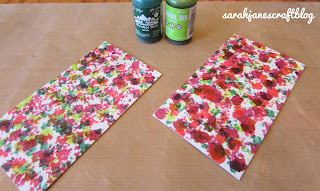 Then, since I figured I was making gift tags, I thought I'd try some red and green. Red and green are really tricky to ink together as they are complementary colors (on opposite sides of the color wheel) and create a lovely shade of brown when mixed together. So I made a point to stamp on two shades of red, wait a few minutes for it to dry and then switch felts on my applicator before applying the two shades of green. They turned out pretty well--no browns. 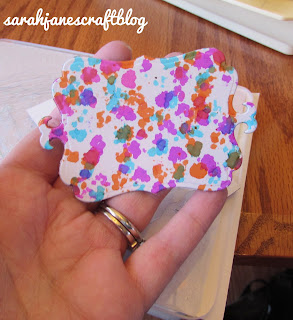 I had hoped to use a large tag punch to cut out gift takes from my newly decorated chipboard, but as hard as I pushed, I couldn't get a neat cut out with the paper punch, so I pulled out the big guns: the Cuttlebug. I tried a Cuttlebug/Cricut brand die first, and after a couple of passes through the machine, it cut out neatly. The thickness of the cardboard also meant that the edges embossed automatically. 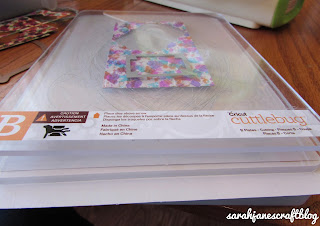 Though I was able to get some other brands of dies to work with the chipboard, the Cuttlebug branded ones worked the best. They cut the easiest and gave the crispest edges. I did need to put a piece of cardstock in my "sandwich" to make it just a smidge thicker to cut better (if it's rolling through really easily, it might not be thick enough, if it makes any sort of noise or doesn't want to roll through with steady pressure, it's too thick--there's a magic spot in the middle), and I flipped my plates over sometimes after I rolled them through the machine. They went A spacer, Cardstock spacer, C plate, chipboard and die, B plate, but sometimes I flipped them to go A spacer, cardstock, B plate, die and chipboard, C plate. The die cuts a bit better with the C plate on top, but flipping it over allows you to see your die placement better. 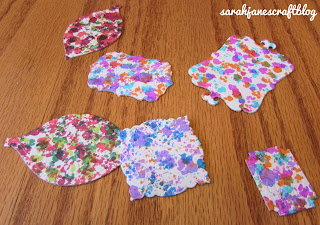 In the end, I was pleased with how they turned out, even if I didn't get the classic gift tag shape. The ink worked pretty well on a surface I'd never tried before, and the chipboard, though a bit stubborn, worked just fine through the Cuttlebug. I even embossed a piece to see how well it worked on this thickness (swapped out the C plate for a B plate and an embossing folder and it worked perfectly).