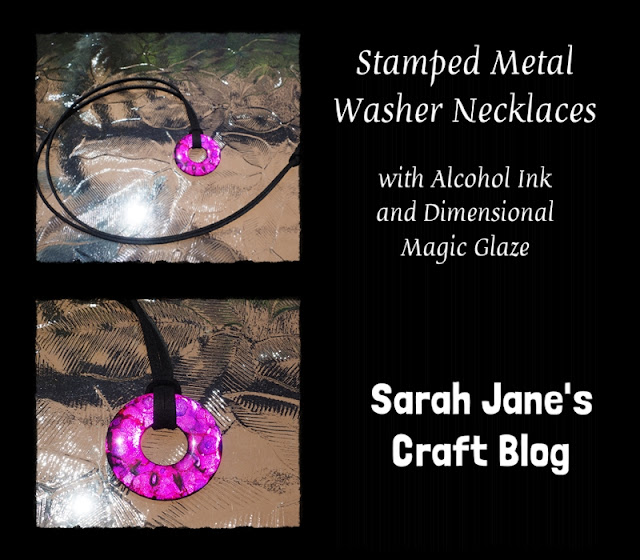 I've made a lot of necklaces out of washers over the years (check them out here: Washer Necklaces). I bought a set of small metal stamps ages ago thinking that I would make all of these great washer necklaces and keychains with inspirational sayings on them. That never happened. The box of stamps sat in my craft stash for years. Well, this week I decided to finally bring them out and give them a go. 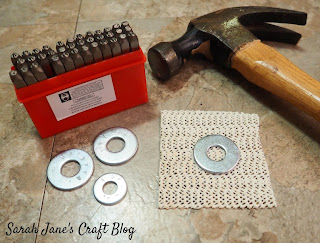 So, I played around to get a feel for them and learned a few things. You need a very solid surface to stamp on. For me, this was a concrete floor (with those peel and stick vinyl tiles on it). I thought I'd put something soft under it to keep it from damaging the floor, but washers are pretty hard, the cushion meant there was no imprint. The washers and the stamps had a tendency to slip, so I cut a little square of grippy drawer liner stuff to put under the washer to protect the floor without too much cushion and keep it from sliding. 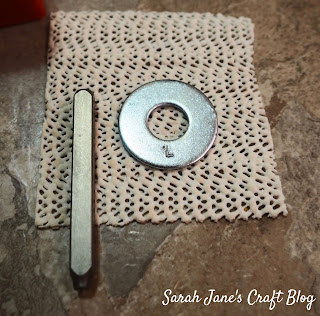 After some test stamps, I got a feel for how hard I needed to hit with my hammer, so I started out with stamping a short word that everyone can get behind: love. 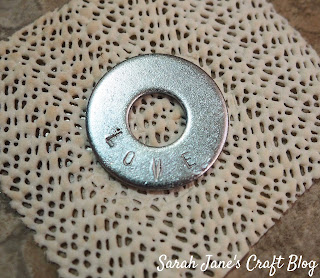 It went ok, but my V slipped a bit. It's hard to get them lined up and for the stamps to stay put. With more practice and not having to sit on the floor, I could probably make nicer looking letters. It's a bit fiddly and requires some practice. 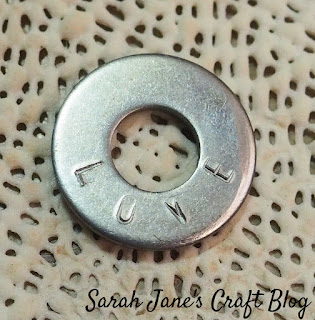 So I grabbed another washer (this time a bit smaller) and tried again. The letters all stayed in place, but a couple (the O and the V) stamped unevenly. So yeah, it's trickier than it looks. 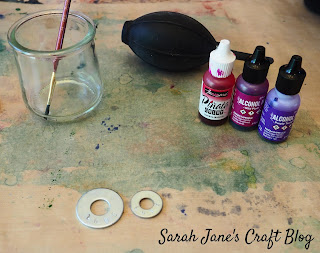 So, after a half hour of futzing about with the washers, I had a could with actual words on it, so I figured I'd decorate them with some alcohol ink to distract from the mediocre lettering. I brought out my craft mat, some pink and purple inks, and small paintbrush and jar with some rubbing alcohol. 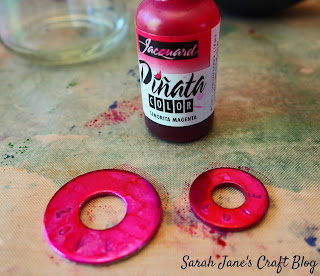 I painted a base coat of Pinata Magenta to get started. It was pretty hard to see the letters, so I opted for some darker colors next. 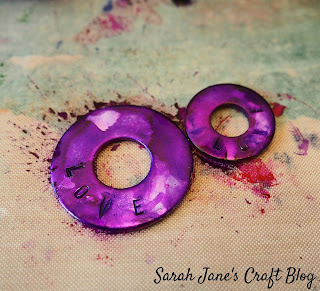 Pinata's Blue Violet pretty much took over the pink, so I had to layer on additional colors over the top and use some rubbing alcohol to remove some of the darker purple ink, but it sunk into the stamped letters nicely and made them easier to read. 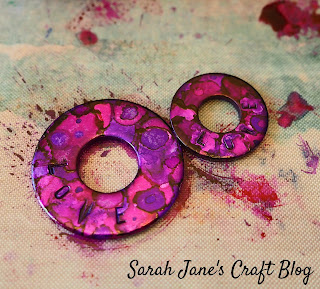 I used my tiny paint brush to dot the alcohol ink onto the washer with various shades of pink and purple until I had an interesting pattern and could see the letters. 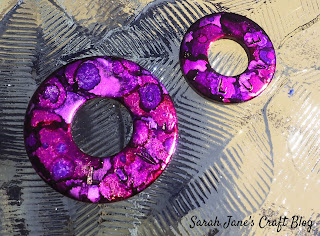 I was fairly satisfied with my inking, but as you can see when I took them outside to get some brighter photos, the letters disappear with different lighting and viewing angles. 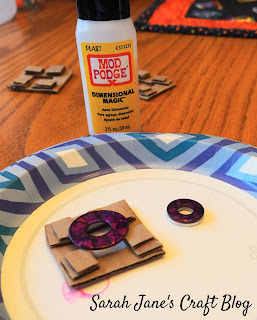 I let the washers dry for a day or two and then sprayed them with some Kamar Varnish to seal the ink. Once the varnish had dried, I used the little cardboard risers I made the last time I glazed washers for my larger washer and set my smaller one on a washer I had used to test my letter stamping. This seemed like a good idea at the time, but turned out to be a bad idea.
I squeezed a thick ring of the Dimensional Magic onto the washer without lifting the tip out of the glue while squeezing it onto the washer. Then I used the tip (without squeezing) to move/drag the glue closer to the outside edge of the washer. When I did this on the smaller washer, the ink flowed over the edge. This is why they go on risers. I let the dimensional magic run off on the smaller washer and then came back and added more to create the shiny glazed effect. 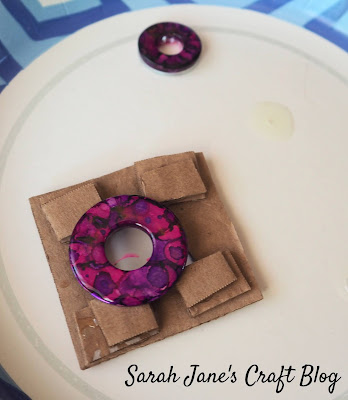 The washers dried perfectly by the next day (slightly domed and shiny), but because the glaze on the small washer ran over the edge, it glued the washer to one I set it on as a riser. The larger washer's glaze turned out well, but it was even harder to see the stamped letters (they're nearly invisible in the photo above). Since it's glaze turned out so well, I strung up the larger washer with some faux suede cording to make a necklace. 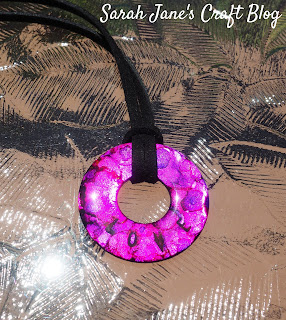 When I took the washer necklace outside to take a photo, the direct sunlight made the lettering pop in the photographs. In natural light, the washer has a much more noticeable pattern and much less noticeable lettering. I learned a lot about this process, though, and I might try stamping again if I can find something a little softer than steel washers to work with.
alcohol inks jewelry washers