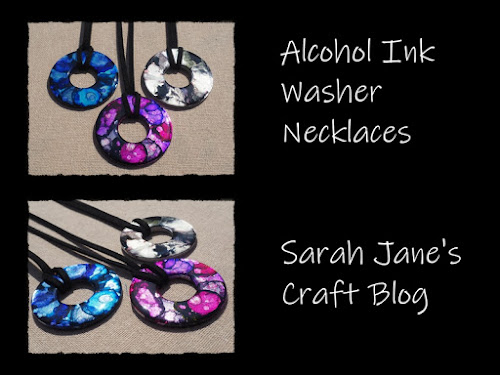 When I was first learning how to use alcohol inks, I tried stamping ink on some hardware store washers and made necklaces. This project became one of my most popular posts. I've revisited washer necklaces many times over the years with different techniques and sealing processes. This time, I wanted to make some washer necklaces that I would be sure to wear. 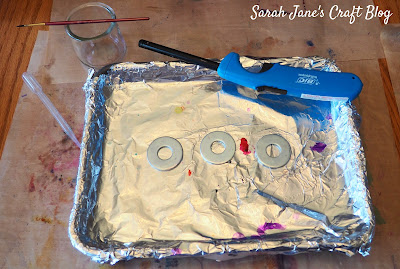 So instead of testing out some crazy new techniques or mixing fun bold colors, I went with methods I knew would work and went with monochromatic color mixes so that I could actually match them to my clothes. I enjoyed flaming the ink on washers, so I set up my craft mat with a cork trivet and a small sheet pan covered in tinfoil. I got out a small jar for some rubbing alcohol, a fine tip brush, and a pipette. I picked out some larger washers from my stash and got out my alcohol inks and a lighter. 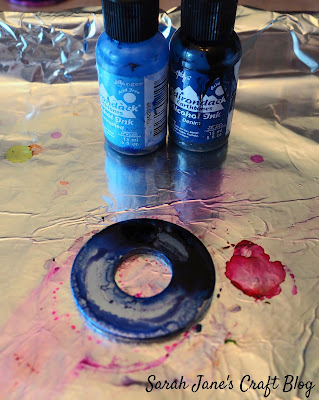 I started out with some shades of blue. I dripped some ink on each half in two different shades and then lit them on fire (I removed the ink from the pan while lighting on fire, then brought them back to take the photo after the flames had gone out). It didn't look like much to start with, but it created a nice base of colors to start with. 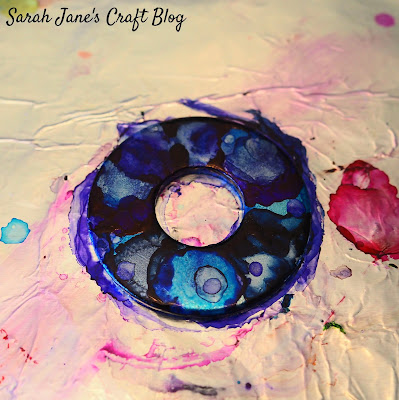 I added drops of color, and light them on fire until I started making a pattern. Certain colors seem to work better than others--some of the blues just disappeared on the silver background of the washer. When I had some good drops, I came back in with my fine tipped brush dipped in rubbing alcohol. I made little dots in the ink with the brush. If the ink ever got too dark, I used the pipette to apply a little more rubbing alcohol and lit it on fire. 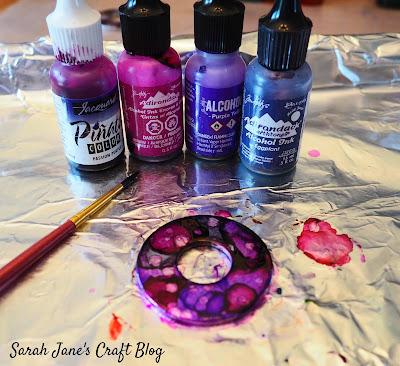 I repeated the same process with 4 shades of purple next. I even tried a black, silver, and white washer, but I didn't get any clear process photos. 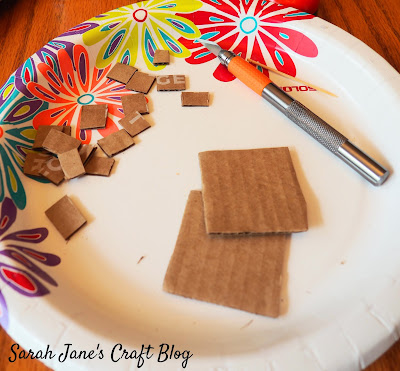 I set them aside to dry for a day and sprayed them with a quick coat of Kamar Varnish to make sure the ink wouldn't react with the glaze. I've had some trouble with glazing washers in the past. The glazes sometimes run off the edge or center of the washers. So I decided to make a drying rig. I cut some squares of cardboard roughly the size of the washers (they look kinda like graham crackers). Then I cut a bunch of tiny squares to hold the washer up off of the larger cardboard square in case the glaze ran. 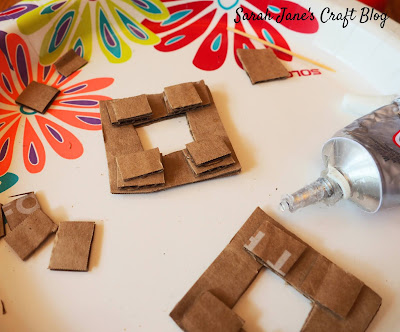 I cut the centers of the squares so that any glaze that did drip, wouldn't stick to the washer. I used some E6000 glue to buildup my corners, but there are probably much better glues to use for this--hot glue and plain white glue would probably be better options, but I had E6000 in a tube that was about to burst right on the table next to me, so I went for it, and it worked fine. I glued a couple of the little squares in each corner. 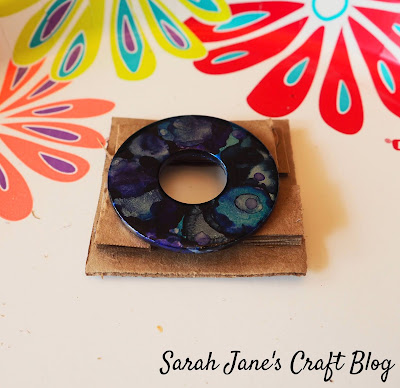 Then I tested it out. It held the washer up and provided an outlet for any dripping glaze. They weren't terribly pretty, but they looked like they would work. 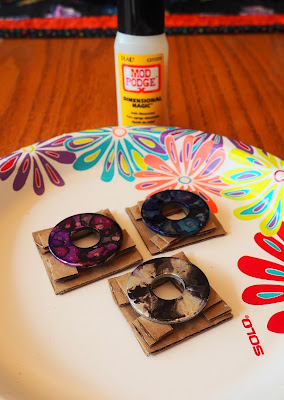 A while back, I tested some of the popular glazes and determined that of the three I had, Mod Podge Dimensional Magic was my favorite for washers. It's a bit thicker and has a nice small nozzle. It's also pretty widely available--so bonus. I set my washers up on their new little stands. I also put them on a paper plate to catch the glaze. 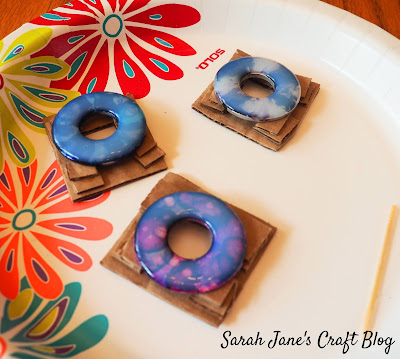 I squeezed on a few circles of glue on each washer and then used a toothpick to spread the glaze as close to the edge as I could without being afraid it would drip over. I was careful not to put too much glaze on, as that makes it more likely to drip over the edge. 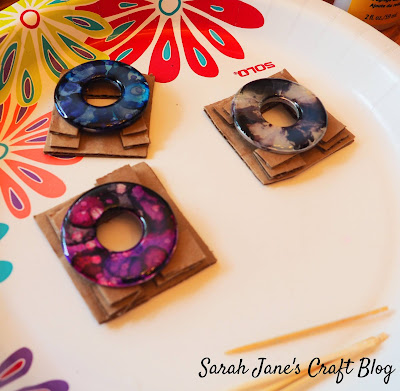 I popped the bubbles that came to the surface with a lighter and a toothpick. Then I let them dry. In the picture above, they had been drying for a couple hours and had started to turn clear, but were still quite wet. I left them to dry over night. 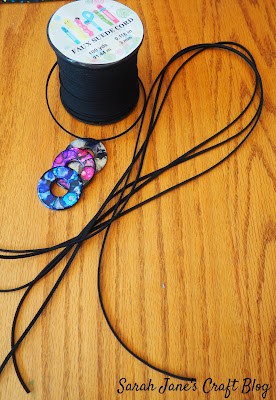 The next day they were dry and glossy clear. My little stands kept them high and dry and none of them even dripped. I should have bought a lottery ticket. I cut some faux suede cording to turn my washers into necklaces. 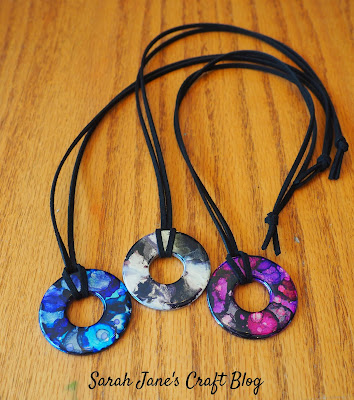 I folded the cord in half and pushed the loop through the hole in the center of the washers and then threaded the two ends through the loop. 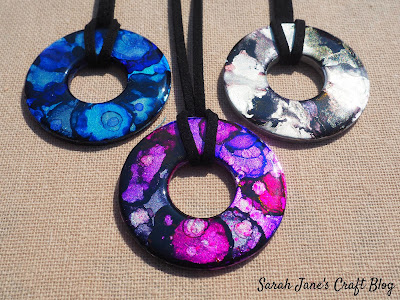 I was really happy with how these turned out. They aren't as colorful as some of my past washers, but they turned out perfectly, and I can't wait to wear them!
alcohol inks Flamed Alcohol Ink jewelry washers