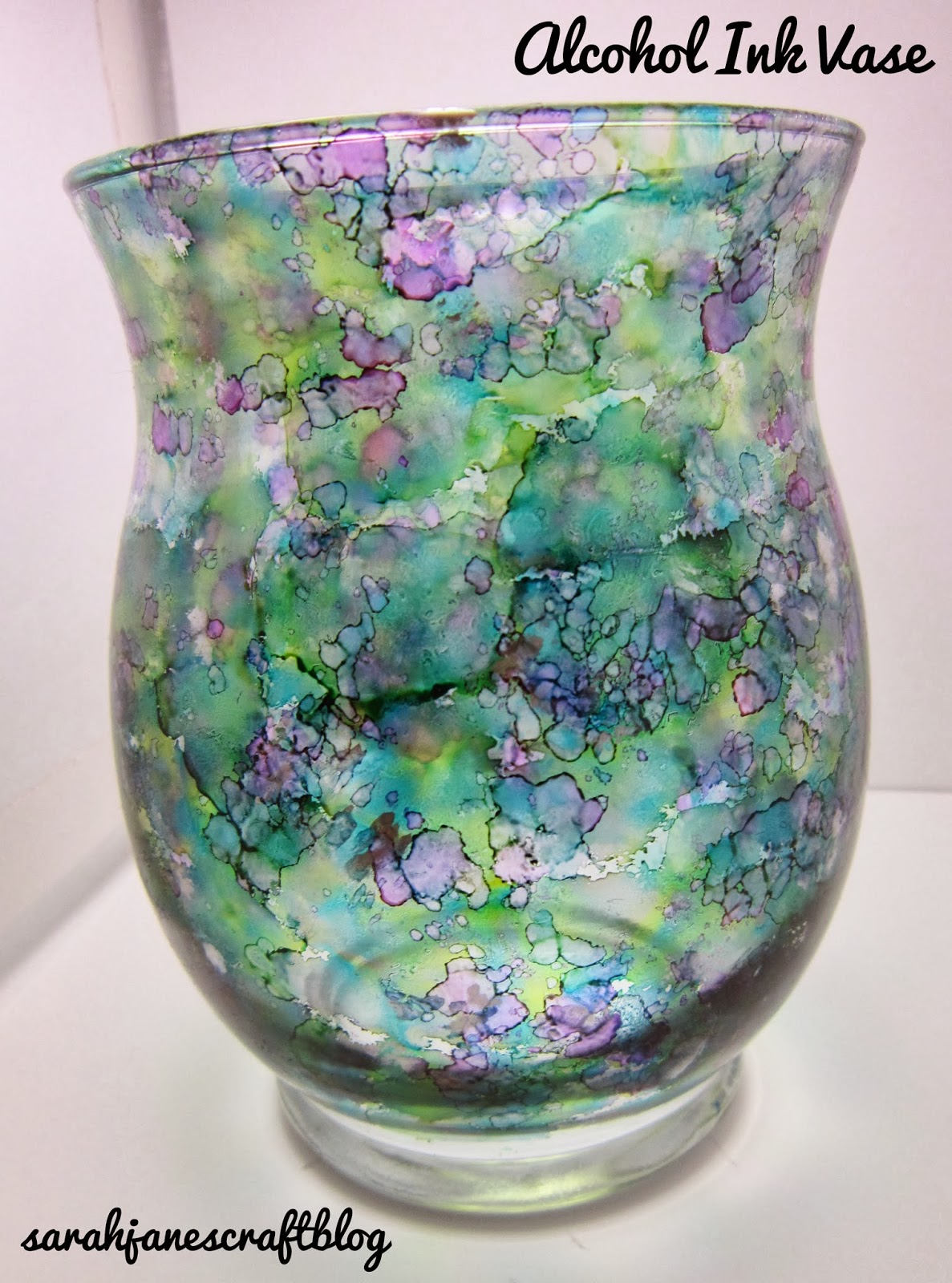 One of the first projects I saw online using Alcohol Inks was a candle holder.  It looked like stained glass, and I was so excited to try using the inks out on glass.  When I got my first alcohol ink, I tried a couple of projects just dripping the ink on and using a little rubbing alcohol as a mixative--one of those was some small votive holders. After making my felt stamper and using it to make washer necklaces and coasters, I knew I had to use the stamper on glass, and it became even more necessary after Hubby got me two packs of new alcohol inks for Christmas.  I had a small vase/large candle holder in my cabinet.  I had picked it up for 99 cents at Goodwill, but I'm sure you can pick up something similar at a dollar store or discount store. 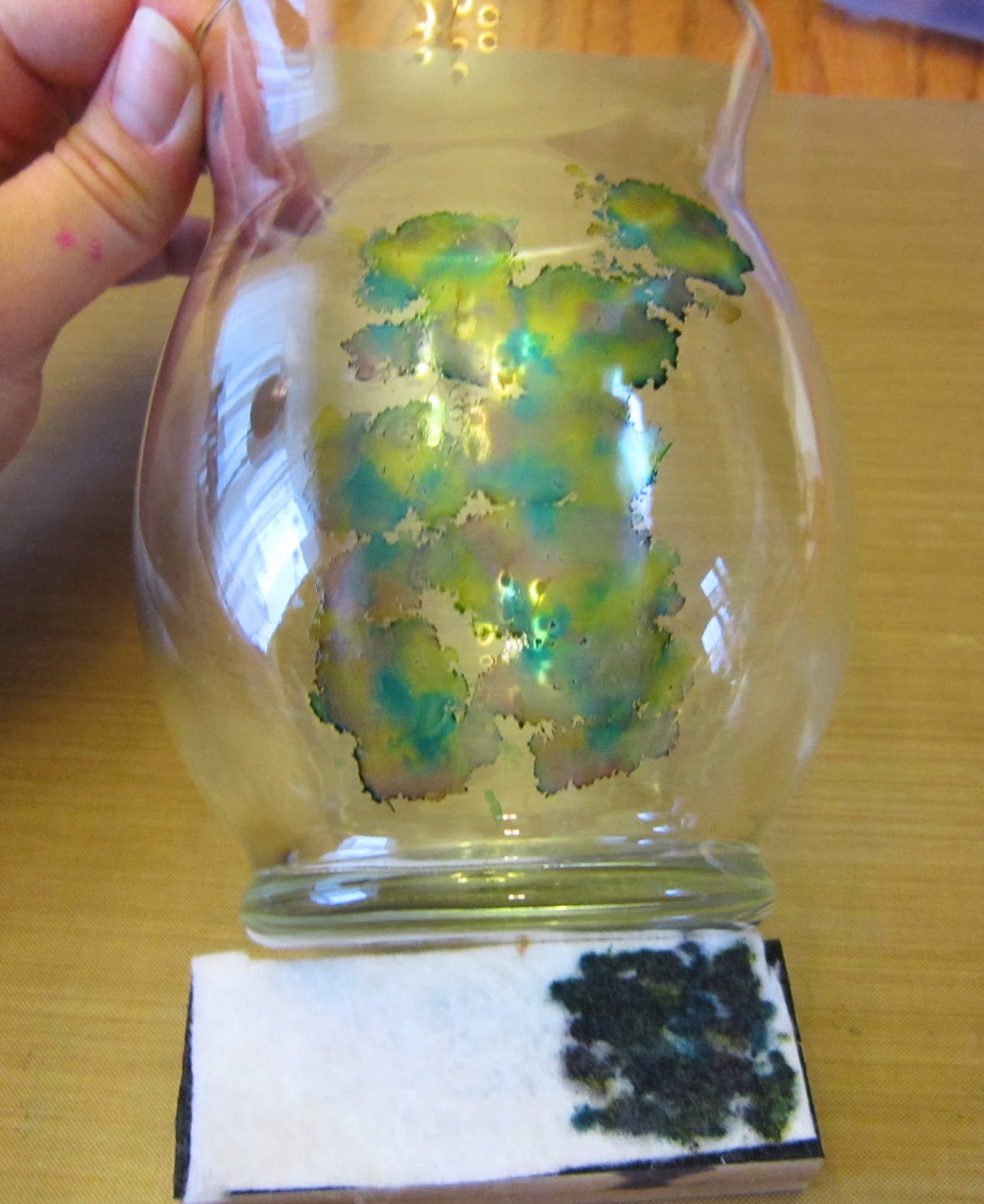 I decided I wanted to use mainly blues and greens on the vase.  So I squirted little dots of all of my blues and greens onto my little homemade applicator stamp felt. Then I started stamping.  I knew I needed to try to make it all around the vase since getting the color combination the same with additional inks is near impossible, so I stamped all around the vase with the same ink to get a base coat of greens and blues. 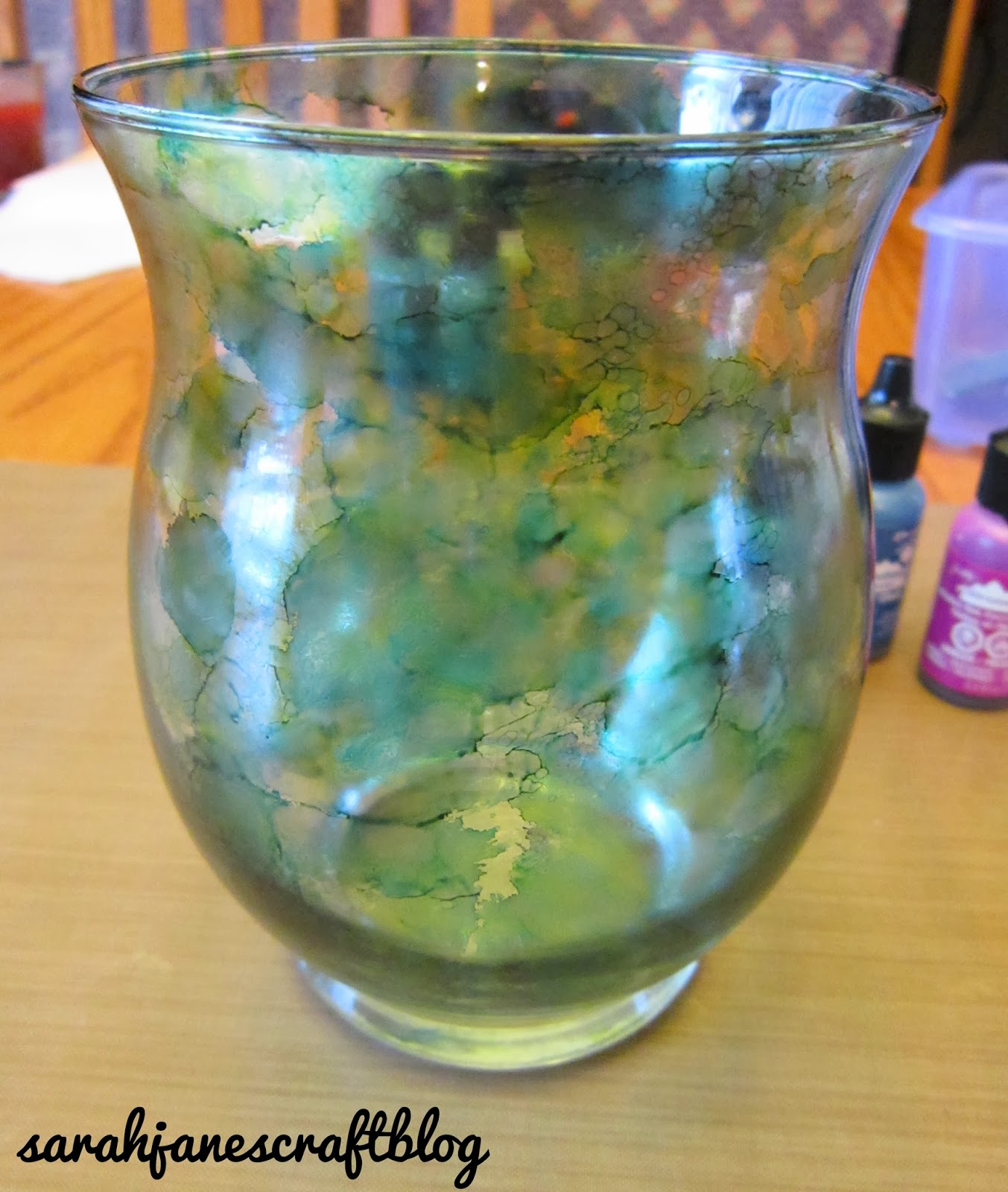 After the base coat was on, I noticed it was pretty green--so I decided to throw in a little magenta as an accent color and some blue to bring that color out.  I even threw in a bit of silver (though I think I liked it a bit better without it as it's not transparent like the rest of the colors).  So I took my applicator and made a second pass around the vase.  After that, I just tried to make sure there weren't any splotchy or overly symmetrical parts--I just stamped a little over a couple areas and it was done. 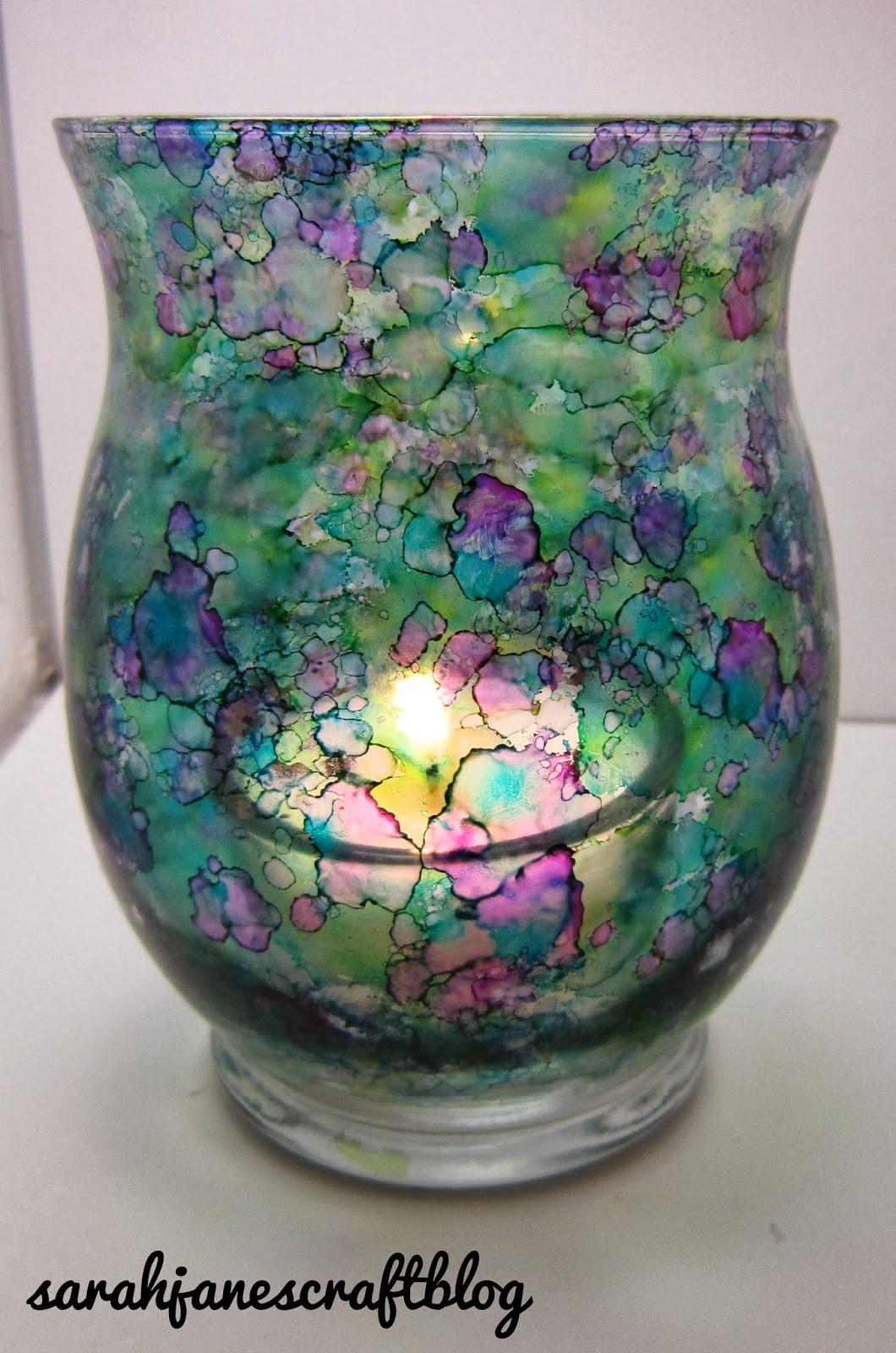 Since the vase is an in between size and I knew it would look pretty with light inside of it, I dropped a candle into it and lit it up so I could admire my creation.  It was a pretty easy project since you just need to stamp a couple of coats of color on it and the ink dries pretty fast so you don't have to wait long between coats. 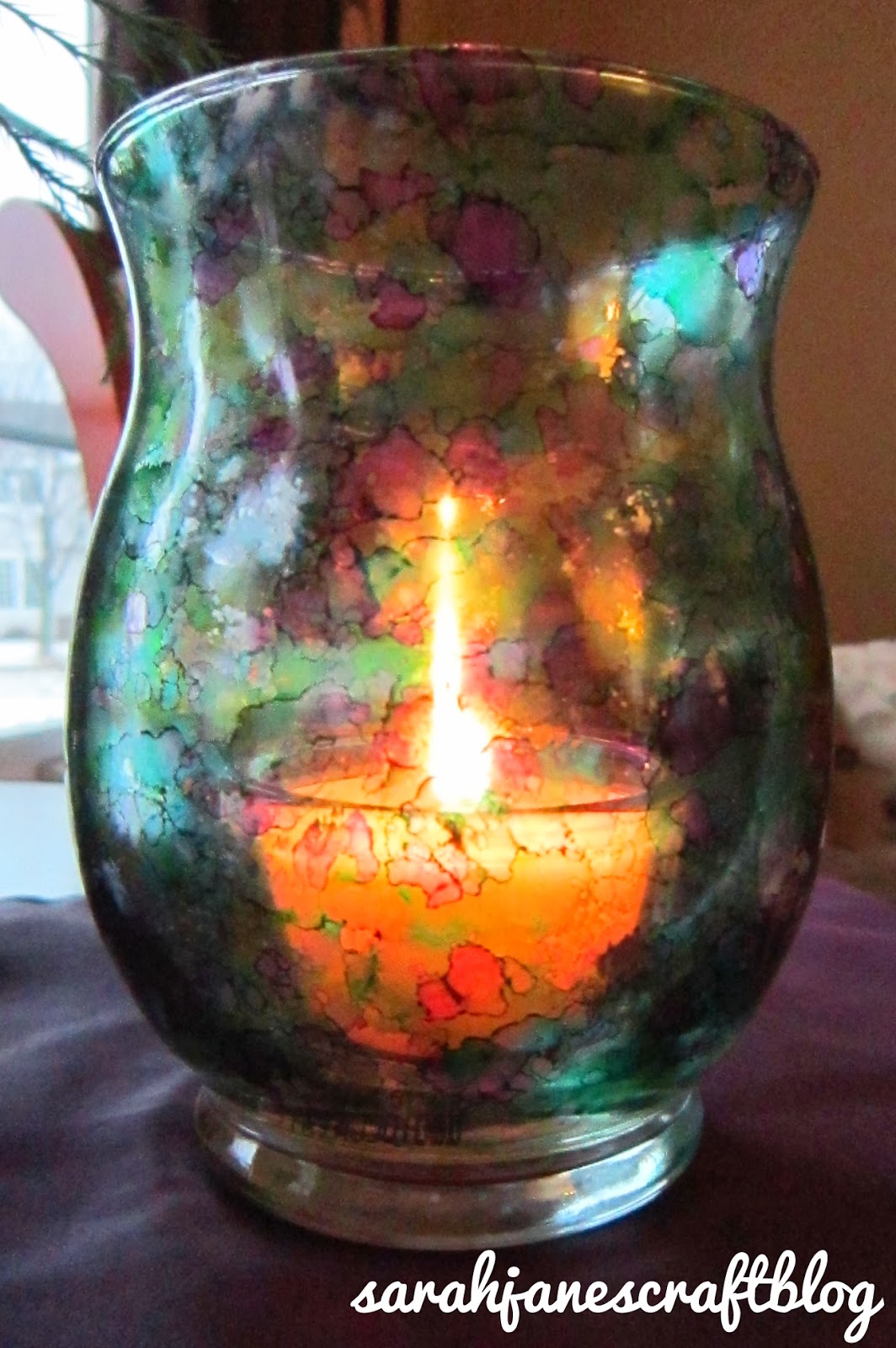