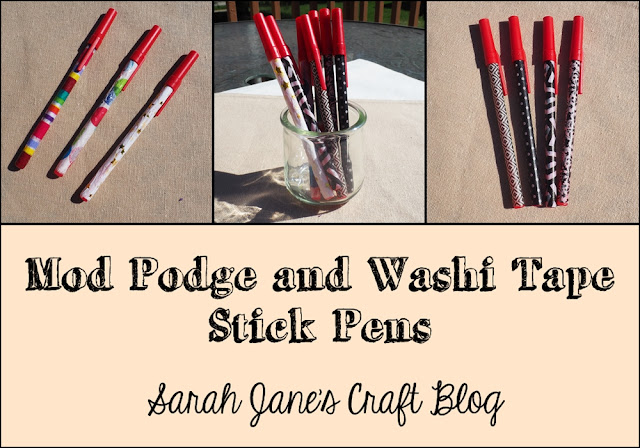 The inspiration for this week's craft came from an unusual place. I was cleaning out some digital files and came upon an untitled document file. When I opened it, all it said was: decoupage tissue paper or fabric on stick pens. I don't remember jotting that down, but I thought, hey, that's not a bad idea. Especially after last week's post with jazzed up binder clips, I guess I'm starting a series on office supplies...well, probably not, but here goes nothing. 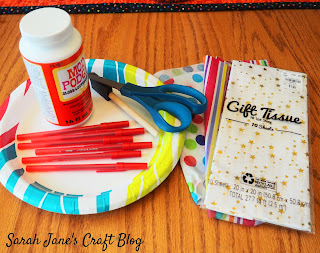 So, I gathered my supplies: Mod Podge, Stick Pens, a foam brush, a scissors, some patterned tissue paper, and a large paper plate to keep the glue off the table. 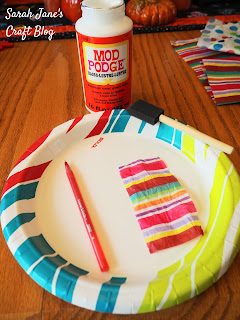 I cut my tissue paper the length of my stick pen and a couple inches wide. I crumpled this paper to see if it made a different with the finished texture (it did not, so you don't need to do that). 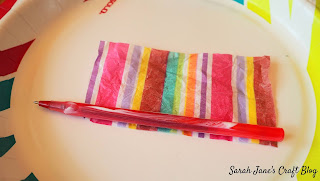 I used the foam brush to spread the mod podge onto the pen, then I lined the pen up on the paper so it would be straight. 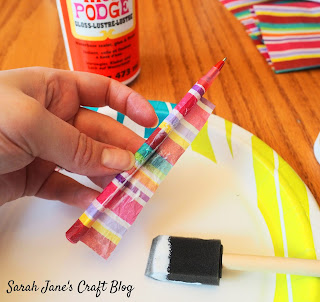 Then I rolled the paper onto the pen, spreading glue as I went. Try hard not to get glue on your fingers. They'll stick to the wet tissue paper and tear it, so stop and clean your hands if you need to. 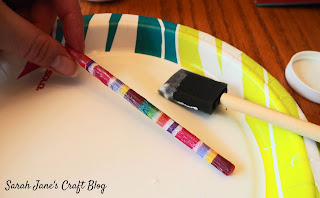 Then I spread a layer of mod podge on the outside of the tissue paper and set it aside to dry. 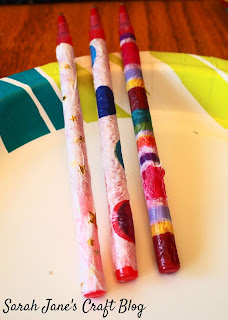 I cut my other tissue paper squares a little smaller (not as wide) so that it would only go around the pen once with a good bit of overlap as I was having a hard time keeping my fingers dry (and tore the paper) on the striped one. So I completed my other two patterns and set them aside to dry. The striped colorful tissue paper looked the best, but had tore, and the other two looked a bit like wet toilet paper. I was not confident that this craft would turn out. So, I left them to dry and decided to make a safety craft. 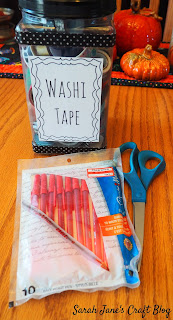 I had a bunch of these red stick pens (I got them for 14 cents a pack one year after Back to School...years ago), so I decided to try another method for decorating these pens, just in case. I used washi tape on last week's binder clips, so I figured it would work on the pens, too. 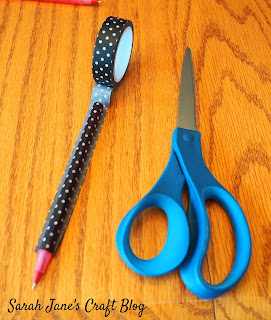 I chose some black and white washi tape (which seem to have a lot of). I started the tape at the top of the pen and then ran it down the pen and trimmed it with a scissors. I smoothed the tape down and then flipped it over and covered the other side. Super easy! Well, I did learn a couple of things. The cap pushed the tape down on the top, so for all the rest of the pens, I started the tape a little farther down. I later came back and re-taped this pen (I peeled the tape off and applied it again a little lower down. It was very easy to re-tape, so no worries if you get it on crooked, you can always redo it).

This pen time I started it a little farther from the tip of the pen. That 1/4 inch or so made all the difference. 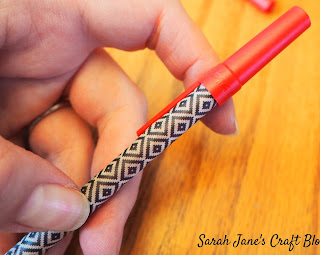 With the cap on, you can't tell that the tape is lower down the pen and the tape and cap don't interfere with each other. 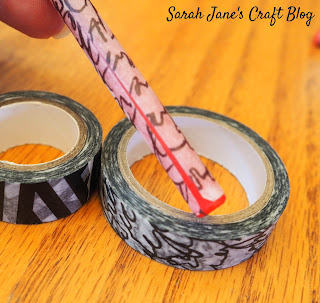 Another thing I learned is that the 15 mm (.6 inches) washi tape works better than 1/2 inch washi tape. The 1/2 inch washi tape is exactly the right size, so if you get it on the pen a little crooked, it will leave a gap. I pealed that tape off and replaced it with the slightly wider tape on the left and it provided just enough wiggle room that I didn't have to apply the tape perfectly straight. The narrower tape will work, it just needs to be precisely applied. 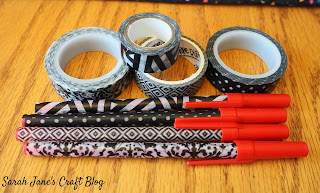 It was very easy to whip up some cute black and white tape-decorated pens. 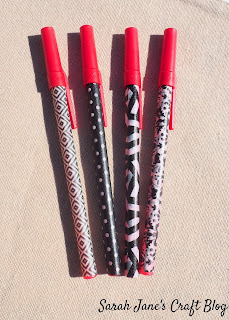 After I finished my washi tape pens, my mod podge pens had dried. 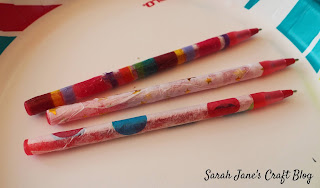 They were looking a bit better (but still not great). 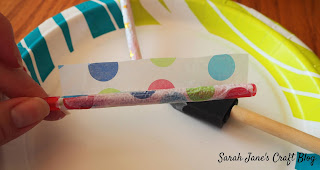 So I applied a second layer of tissue paper on all three pens. 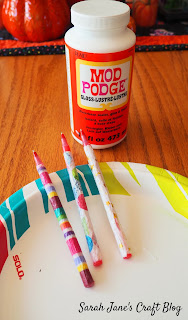 Then I applied a layer of mod podge to seal them and let them dry. 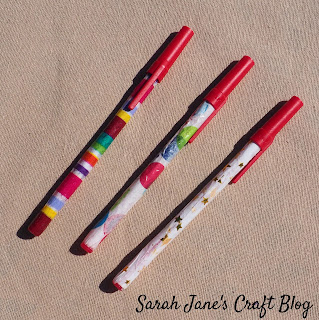 In the end, they didn't turn out too bad. I might try this again with some darker tissue paper. The striped pen turned out the best (after I covered the torn paper) because it was almost solid colors.. The two with mainly white backgrounds might work well on white pens, but only looked ok after two layers of paper on the red ones.
So there you have it, two ways to decorate stick pens. So, what are you waiting for? Your home office needs some more color (or pattern)!
mod podge office supplies tissue paper washi tape