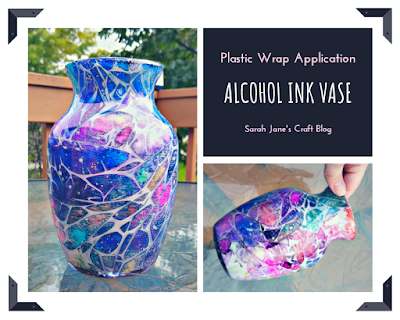 During last week's project, I mentioned that I had found two vases that I wanted to craft with in my stash of glassware. Well last week I spray painted over the ink, this week I decided to spray paint the vase white (on the inside) and then use the plastic wrap technique, that I've finally gotten a hang of, on the outside. 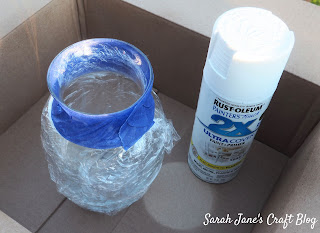 So I took my vase outside and covered it in plastic wrap and painter's tape to keep the spray paint on the inside of the vase. 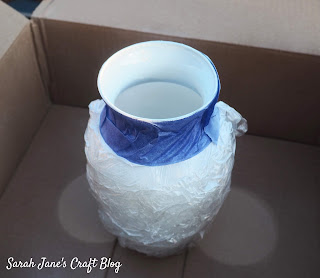 I gave it a couple of good coats of spray paint and let it finish drying overnight. 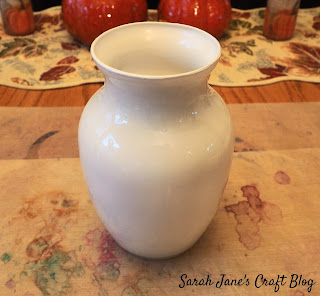 When I unwrapped it the next day, it was a lovely plain white vase. 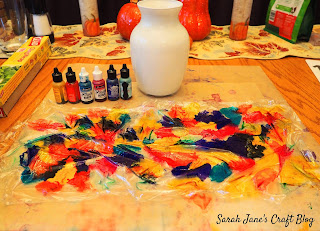 I laid out a piece of plastic wrap large enough to cover my vase and dripped ink all over it. I went a little overboard actually, but had a lot of fun covering it in ink drops. I used a rainbow of both Ranger Inks and Pinata Inks. 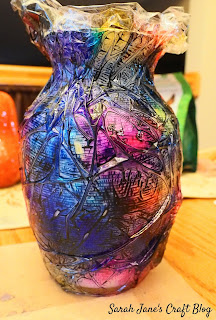 I set my vase onto the plastic wrap and wrapped it around the vase. I tried not to wrap the top layer over the edge so I could keep the inside lip clean (I was only sort of successful as some ink did get on the lip of the vase). There was a bit too much ink on my plastic wrap though, and the bottom of the vase leaked a pool of ink onto my craft mat. I had to leave it on the mat to dry overnight. 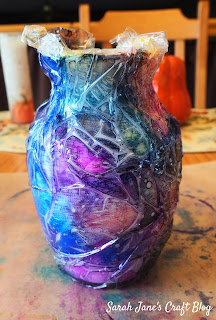 The next morning, it was mostly dry, but still wet in places, so I left it until the afternoon. Then I peeled the plastic off of the vase. And yet again, this method didn't disappoint. The colors mixed beautifully and the plastic wrap left neat lines and shapes. 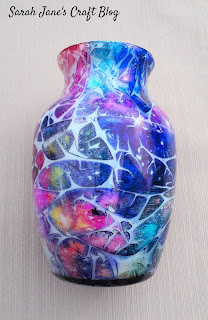 It turned out wonderfully with a rainbow of colors! My next thought, I wonder if I could figure out a way to do this on the inside of the vase before I spray paint it? With the ink on the outside, I'll have to set it with some Kamar Varnish. As long as the vase is decorative and not being handled, that should probably be enough of a sealer. 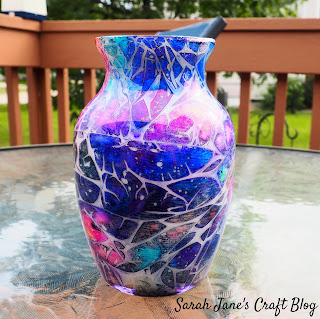