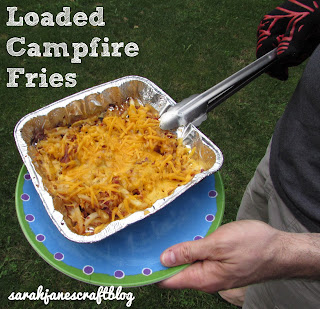 Earlier this month we went camping for a week. Every time we go camping, we try to cook something new or unique. A couple years ago we had some success with campfire quesoritos (a burrito quesadilla hybrid cooked on the grill) and a few years ago we tried out campfire eclairs. This year's wildcard was loaded french fries cooked with onions, cheese, and bacon and cooked over a campfire. 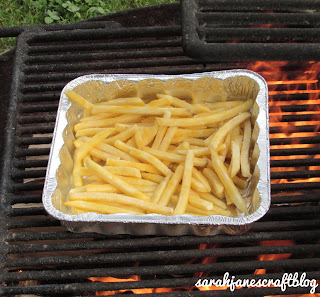 You'll need:
a tin foil pan (I got a pack of 3 at the local grocery store for 99 cents--just make sure it doesn't have a nonstick coating or any plastic bits since it will be over flames)
vegetable oil (or canola or peanut oil--anything that can handle the high heat)
frozen fries
bacon bits
chopped onions
your favorite shredded cheese (I used cheddar)
long handled tongs and turner/spatula
a pointed knife or skewer
optional: fire gloves (these are really helpful when cooking over a fire)

I didn't include exact quantities because I didn't measure anything either time that I made them--it's camping darn it. :) I put about a third to half of the bag of frozen fries in my pan and about a third of a cup-ish of oil in the pan. I tossed the fries in the oil while they were frozen and there was still some oil in the bottom of the pan to keep things from cooking and to fry them a bit. Then I plopped it onto the grate over the fire while it was still flaming hot. 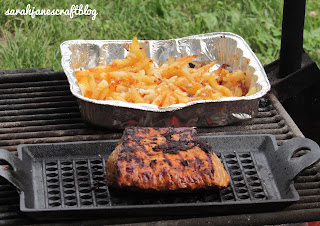 We stirred the fries to get them to cook evenly and when the flames died down a bit, we added our main course (that night it was a marinated pork loin cooked on our new cast iron grill plate--it works great!). The fries will take a while to get going (they started out frozen after all). So you'll want to give them a decent head start on the rest of your food. Make sure they at least look thawed out and warming before starting your main course. They'll look floppy and break apart a bit as you stir--this is ok--they'll still taste good. We used the tongs to hold the pan and a turner to stir the fries. Move them off the heat a bit or use fire gloves for safety. Once the fries start browning up a bit but are still a bit floppy, I added my onions. I was using frozen onions, so if you are using fresh, you'll probably want to wait and add the onions with the bacon bits. 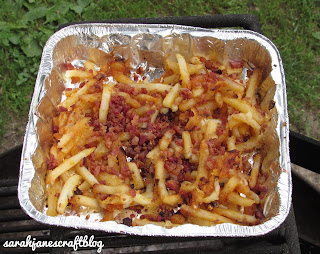 When the fries are almost done to your liking--starting to get golden brown--now is the time to remove the excess oil from the pan. Use a pointed steak knife or bamboo skewer--whatever you've got on hand, to poke a hole or two in the foil pan to let any excess oil run out. You may need to tip the pan a bit toward the hole with your tongs. This will cause a flame up as the oil pours near or on your fire, so be careful! Once most of the oil is gone, put the bacon bits in (we used the real bacon kind that come in a bag). 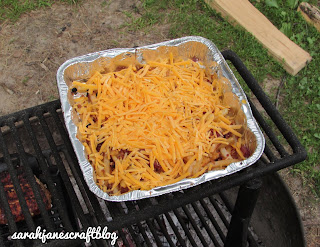 When the rest of your meal is almost done, then it's time to put on the cheese. The bacon bits don't need too much time and the fries were pretty much done in the previous step, so if the rest of your meal isn't ready, move the fries off  to the side or to the upper rack (whatever you've got) and when everything else is nearing done, put the cheese on. The cheese will need a few minutes over the fire and then the heat from the fries should carry it the rest of the way. 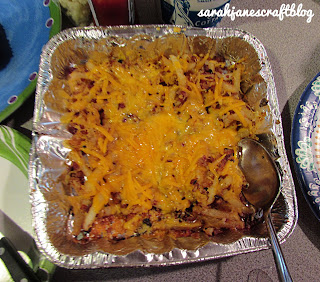 These turned out delicious and might even make it into regular camping food rotation. The topping possibilities are endless. I'm sure they'd taste great with sour cream or possibly a nacho theme with jalapenos. We look forward to experimenting with them in the future!