It's that time of the year again. The time where I begin to prepare for a season of camping and fires in the backyard fire pit. Each year I try to experiment and expand and perfect the process of making homemade fire starters. Last year I made my original dryer lint fire starters (which are a tried and true standby), but I also made some fire starters by putting pencil shavings (colored pencils to be exact) in paper cups (and then covering in wax). There were some flaws in the design. It was hard to get them lit--but once they were lit, they burned forever. So this year, I decided to use the good old egg carton method (it catches fire easily and you just break off a chunk to light). 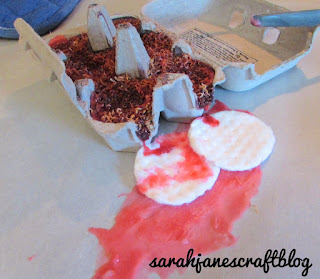 I didn't have a ton of pencil shavings, so I used a half carton (I bought 6 eggs this way at the grocery store). Of course the end of the carton wasn't closed, so there was some drippage. I usually cover half of my stove top with parchment or wax paper and heat up my wax on the other half of the stove. 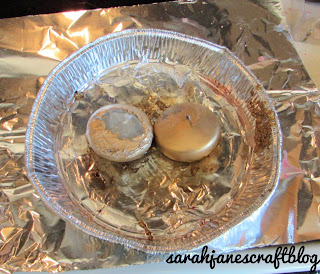 For a ceramic top stove, I put down some tinfoil to keep the stove clean (no matter how careful I am, the wax always drips) and a cheap tinfoil pan (2 or 3 for a dollar) to melt the wax. You could use any old pot or pan you have, but the tinfoil pans can be reused until they get crumpled and then tossed without extra cleanup--though they aren't terribly sturdy which can cause spills if you're not careful. This year's old candle stash included some gold Christmas candles, so my fire starters will look extra festive. I usually burn up old or very cheap candles--higher quality wax works even better (they burn longer), but I usually just try to use up what I have laying around so they don't cost anything. 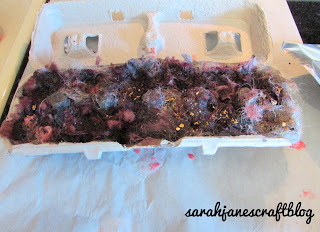 I washed an old throw so my lint egg carton was full to the brim with little bits of red fluff from that blanket...and dog hair, because we have a dog. These egg cartons full of lint don't usually look very pretty (actually pretty gross) but they burn really well. 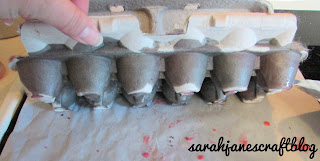 I had my egg carton pretty full this year, so I used a fair bit of wax. As long as the wax starts to bleed through the bottoms, you know you've put on enough to saturate the lint. This was a bit more than I probably needed, but as long as there's enough paper without wax left on the carton to light, they should work just fine. 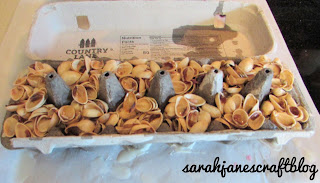 This year's total wild card was pistachio shells. Hubby started snacking on the things and was throwing away a lot of shells--he looked up if they burned well, and low and behold, we've got ourselves a new fuel...so I thought I'd give them the egg carton treatment too. I poured a ton of wax on them since there are so many gaps between shells. There were even little pools underneath the carton when I was finished. I'm not sure how these guys will work out, but it was worth a shot. My best guess is they'll work about as well as the ones I made from shredded paper a few years back (they burned ok, but pieces of paper kept falling off, and they didn't burn as long as the lint starters). 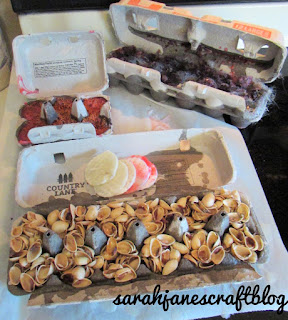 I also made a few cotton round starters (just cotton rounds dipped in wax) to clean up leftover wax. These are really nice and small and flat, but they don't burn anywhere near as long as the starters I make in egg cartons. The trick with the cotton rounds is to make sure the whole round doesn't get saturated in wax so you can get them lit easily.

In a week or two (whenever I get time to have a fire), I'll post an update about how well these all worked. See you soon!