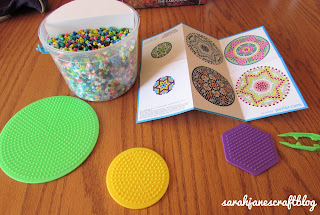 I'm not sure how I managed to make it to 36 without ever having used Perler beads, but here I am. I saw some cute projects using the melting plastic beads while I was browsing Pinterest and craft blogs, so I figured it might be fun to give them a try. I found a kit that included a mix of different colored beads, peg boards, ironing paper, and instructions for creating mandala patterns. I figured that would be a little more grown up than some of the other options and bit the bullet. The kit costs $6-8 and contained everything I needed to give these beads a whirl. After reading some tutorials online, I sprung for the tweezers (I have big hands and figured I'd be swearing if I didn't). 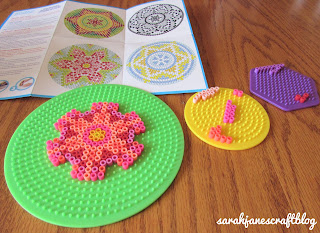 The first thing I found out is that the bucket looks bigger in photos online than it appears in real life. The bucket is about 6 inches by 5 inches. They do manage to cram a lot of stuff into the little bucket though. It even comes with 3 peg boards (one is shrink wrapped to the lid). The next thing I found out was that the "patterns" for the designs are just pictures with no colors or numbers for reference.

When I first received the bucket of beads, I made a pattern on one of the small peg boards, but it never ended up getting ironed. I ran out of space on the table and it ended up getting cleared back into the bucket. So when I started it the second time, I went straight for the big peg board and created one of the larger designs. I learned pretty quickly that the most tedious part of the whole process was finding the beads that were the color you wanted. Fishing them out of the bucket and finding the colors that roughly corresponded with the pattern was tricky. I ended up fishing out all of the pinks and arranging the spare beads on the extra peg boards while I was placing them in the design. 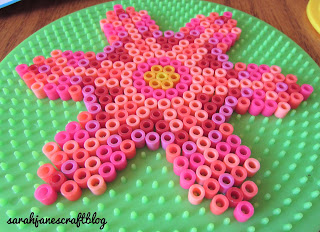 I ended up having to adjust the pattern colors a bit based on the shades of pink that I was able to find, but other than that, it was pretty easy to follow the picture and adjust as necessary. I took a short break from tweezering beads after I finished the pink flower. 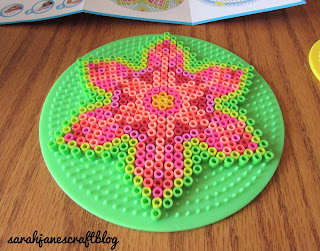 After the pattern started incorporating other colors, it was much easier to find them in the bucket. I was on pink overload until I switched to the green. 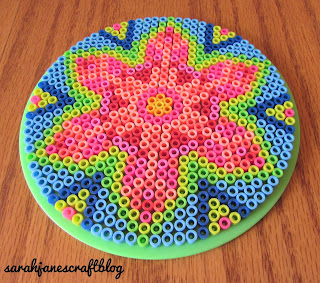 All told, I spent over an hour on the design. Not so tedious that I wouldn't do it again, but it certainly requires a little bit of patience. Next up was the very careful job of moving the board of tiny lightweight beads down to the laundry room to iron them in place. 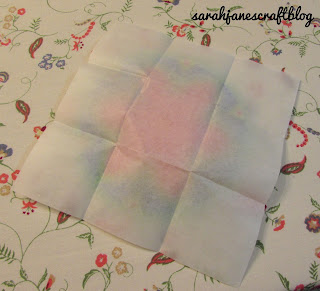 The instructions say to set your iron to medium, place the ironing paper over the top of the beads, and iron for 10-20 seconds. It goes on to say that it would take longer with larger designs. 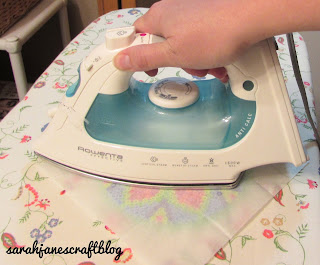 I figured I'd have to iron each section of the approximately 5-inch patterns for 20ish seconds...so like a minute. NOPE! Not even remotely. I have no idea where they came up with the 10-20 seconds crap, but it's not even in the realm of reality. I ironed for a good 2 or 3 minutes before the beads began to look fused. I peeled the edge of the paper off to check and the beads immediately popped off. I swore and tried to get them back on the board and ironed some more. Another 2-3 minutes later and it finally looked like it was melting. 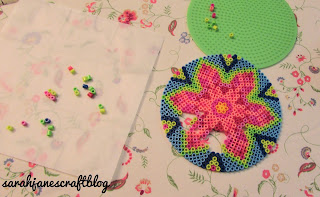 So I peeled the paper off. NOPE! DO NOT PEEL the paper off until you are ABSOLUTELY SURE the beads are fused. A bunch of beads stuck to the paper and the whole shebang pulled off of the peg board and some of the beads stuck there too. The design would not go back on the peg board, and I spent the next 15 minutes trying to get the beads back in the general vicinity that they were in before.

After I got them sort of in place, I realized I was missing one bead and that a pink one didn't appear to belong anywhere. I have no idea how it happened. But I got it back together, sort of, and ironed until they were stuck to each other. Then I flipped it over and ironed the back side. By that point I had turned the iron up and was leaving the iron in one place for longer, so the back side took considerably less time to iron. 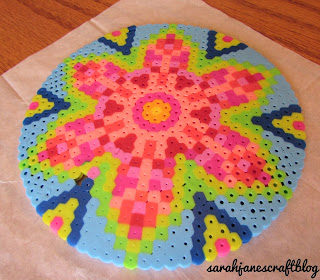 In the end, it turned out ok until you look really close. A couple of the beads ended up turning onto their sides, and I never did find the one missing bead.

So what did I learn from all of this, start with the smallest project to get used to the fusing, and iron it until you are completely certain that it's fused before pulling the paper off--it will definitely take longer than 10-20 seconds. I'll definitely be revisiting this project in the future, but until then, I wanted you all to know what not to do. Happy Crafting!