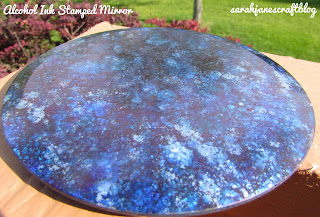 In January I bought a mirrored candle plate from Dollar Tree because I hadn't used alcohol ink on a mirror yet. I used bright colors and canned air and it didn't quite turn out the way I had hoped. I wiped the plate off several times with rubbing alcohol and restarted. After several months with color splotches, I cleaned it off again (some surfaces don't clean off easily after months--the less porous the better) and it came completely clean. After the initial rinse with rubbing alcohol and then with water, I wet down a paper towel with some rubbing alcohol for any spots that were stubborn and left it on the mirror to soak for a couple minutes and it wiped right off. 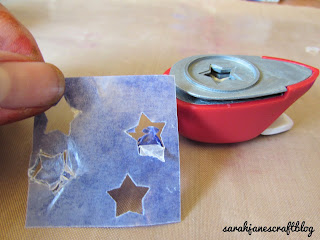 This time I had the idea that I wanted to create a sort of galaxy pattern. I would cut stars out of painters tape and sprinkle them across the plate. Then after stamping and a little spattering of rubbing alcohol, it would look like outer space. First I tried cutting the stars with a scissors...they looked more misshapen with every attempt. Then I had the brilliant idea of using a paper punch. It mangled the tape by itself, so I stuck it on some parchment paper--scratch that--it didn't stick at all (which shouldn't have been as surprising as it was since that's the whole point of parchment paper). Next, I tried wax paper (as seen above), which sort of worked. They would come out a bit ragged, but they punched through some of the time. Then I tried tinfoil. It punched out perfectly, but I couldn't get the darn tape stars off of the aluminum foil. 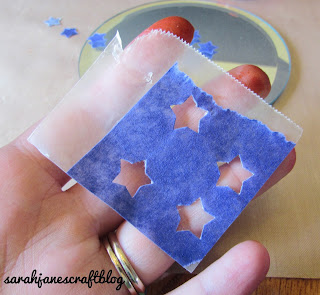 So I went back to the wax paper. I discovered that it cut much more cleanly if I did a blind punch (bottom down, punch lever up), so that's what I ended up doing to punch the rest of my little stars. 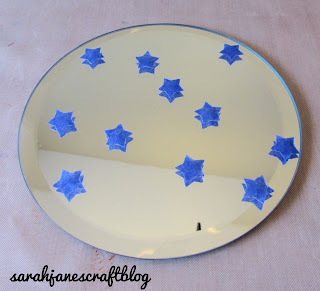 I laid out a little pattern of stars on my plate and rubbed the edges of the tape down as best as I could. 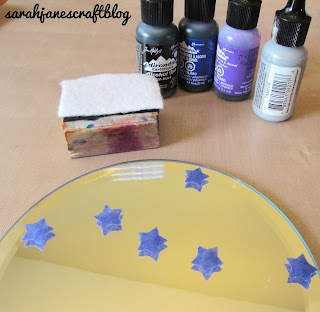 Next, I grabbed my alcohol ink applicator and some ink that I thought would create a night sky effect: pitch black, indigo, purple twilight, and silver. 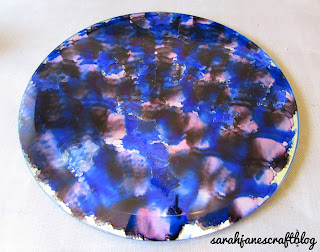 I dripped all of the colors of ink except the silver onto the felt and stamped it onto the mirror. Immediately the tape stars peeled up. One came off entirely. The rest I was able to flatten out a bit. But I wasn't hopeful that they would create any kind of resist, but I carried on. After the first pass of color, it was really loose and watercolor-y. That wasn't the look I was going for, so I kept stamping. 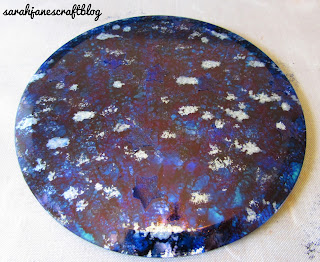 After stamping a few times with the existing colors, it became more stippled, and I added the silver to the mix. I was really liking how the mirror reflected the ink (which is hard to see in the photos). 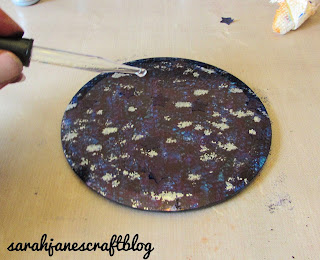 After I was fairly happy with the color mix, I dug out an eye dropper and dripped a bit of rubbing alcohol on the mirror. I used the technique where I emptied the eye dropper so there was just residual alcohol in the tube, then squeezed the end to blow any remaining alcohol onto the ink in tiny droplets. This method is really effective on white surfaces but was barely visible on the mirror. I stamped and dripped alcohol until I was happy with the way it looked. 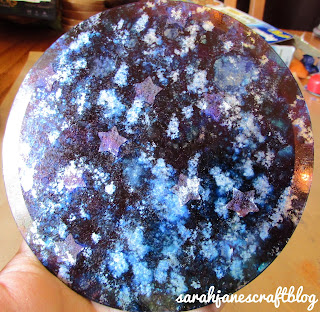 I really liked the way the ink looked on the mirror at this point, but I knew the tape stars would require a miracle to work. I waited a minute for the ink to dry a bit and then peeled the tape stars off the mirror. 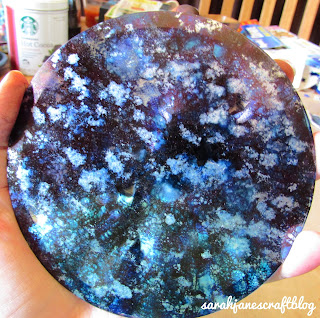 As you can see, or rather not see, the tape stars were barely visible. Too much ink bled underneath the tape, and they just looked like blurry mirror blobs. So I re-inked my felt to fill the weird blobs in a bit. 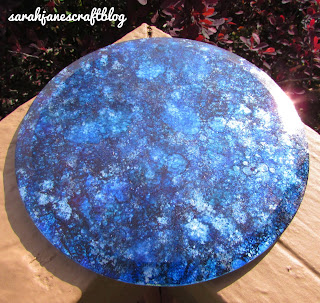 To fill in the voids, I had to mostly cover the mirror with ink, which means I lost almost all of the reflective quality, but I still think the blue/silver/black speckled look turned out really beautiful. I was pretty frustrated with this one while I was doing it since I wasted a good hour on the tape stars and figuring out what would work, and then it totally missed the mark, but I just kept going, and it still turned out pretty nice.

Remember if you're happy with your design and it's going to be handled or around any alcohol based liquids (including hairspray and perfume) be sure to seal your alcohol ink masterpieces with some mod podge or clear acrylic spray. Alcohol ink stays put pretty well on glass if you are just keeping it as a decorative piece on a shelf, but sealing it keeps the ink from smudging, smearing, or flaking off.