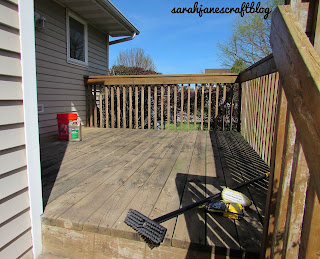 I teach at a local community college, so it's crunch time grade wise....and we had a lightning in a bottle kind of weekend where it was sunny with no rain forecasted, low humidity, and with warm but not hot temperatures for both days of the weekend. So, we had to do yard work. After our mowing and trimming on Saturday, we decided to refresh our deck. Between the deck and grading....I didn't get much else done, so instead of a craft tutorial, you get to see our deck painting project. 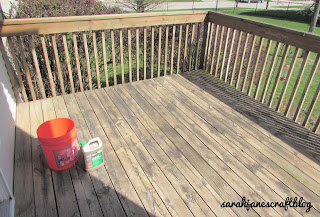 Our deck was beyond beginning to get ragged. It hadn't been sealed since before we bought our house and there was a lot of mildew, cracking, and even some lichen on it. So we opted for a deck filler type product at our local Home Depot (because it was the closest hardware store). We bought Behr Wood Cleaner and followed the instructions (wear gloves, mix with an equal part water, wet deck, scrub or swab on solution, rinse off). 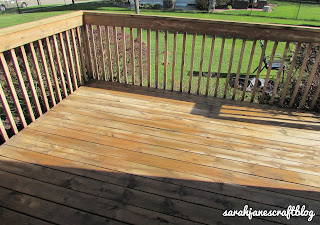 We scrubbed it on as we knew there were some tough spots that needed cleaning. After a few hours of clearing off the deck, cleaning it up, hosing it down, and scrubbing it clean, we were pretty pleased with the way it turned out. It looked like a brand new deck. This stuff mostly worked as it claimed and my only complaint was that it smelled a little chemically...and burned a bit when you got splashed with it. 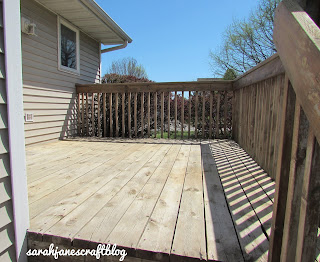 The wood cleaner requires you to wait 24 hours for the wood to dry before you can paint or stain. The next morning the deck still looked much cleaner, but not as golden brown as it did when it was wet. 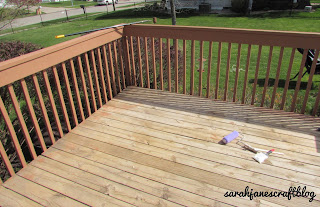 When we finally decided on a color (not too dark because the deck gets lots of sun), we went back to our local Home Depot and picked up Behr DeckOver. After taping around the siding where the deck met the house, we started on the railings. This was by far the worst part of this task. It was incredibly tedious. We had a couple of small rollers that helped it along, but the DeckOver is like painting with pudding. It's incredibly thick and it soaks right into the raw wood and cracks, so you really have to slop it on. 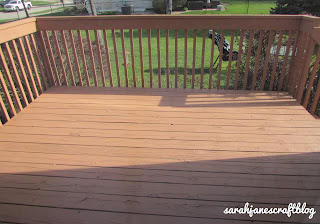 Though the DeckOver wasn't easy to work with, it definitely filled a lot of the cracks. We ended up having barely enough with two gallons of paint to finish one coat of the deck. The product suggests that you can achieve 2 coats on a 75 square foot deck with one gallon. The railings make it very hard to calculate square footage though. So buy more than you think need if you need to paint railings. 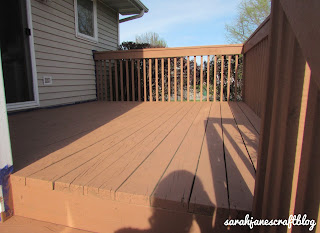 Because it's so thick, there are definitely places on the deck that could use a second coat, but this is all we could get done today. We'll probably pick up more DeckOver and give it another coat or at least touch ups before we call it good, but we're pretty pleased with the improvement. 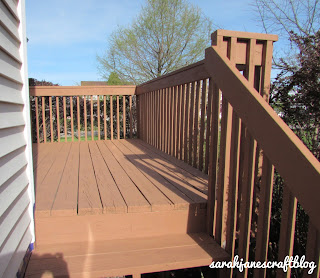 I hope you had a beautiful and productive weekend where you are too!