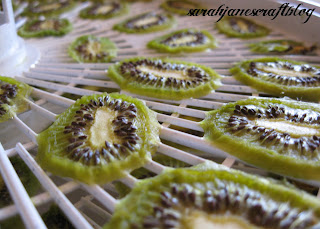 My husband received a food dehydrator from his mother for Christmas last year.  In the past year we've dehydrated lots of fruits and some meat for Jerky.  And during those experiments, most of what we dried turned out great.  Of course, it's always trial and error when cooking, and that's especially true of dehydrating because of all of the factors that keep recipe books from having definitive times, widths to cut things, and even temperatures to set your dehydrator at.  Much of these estimations and ranges have to do with your dehydrator--they don't all have the same motors or settings.  Air temperature and humidity also play a part, and so do variations in the food you are drying (ex: different types of apples grown in different climates harvested at different times are going to have different water content).  That being said, I hope I can share a few of the things we've learned about dehydrating by showing some of the things we have been successful at drying.

HyVee (our local grocery chain) had kiwi on sale for 5 for $1 last week.  So we'll start with Kiwi! 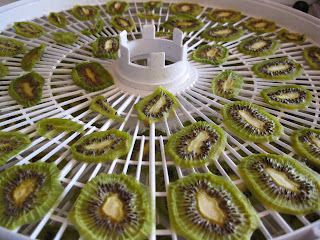 My husband filled a produce bag with 20 kiwi.  When he brought it over to the cart, my eyes grew larger as I thought of all of the peeling, but it only took us about a half an hour to peel and slice them.  In our few times drying kiwi, I have learned some tricks about prepping them--which is generally a slippery ordeal.  First, slice the ends off of your kiwi with a knife and peel your kiwi like an apple (in a spiral around the fruit).  This is faster, easier, and a bit less slippery than peeling pole-to-pole. Next, though a mandolin/v-slicer works fine, we've found the easiest way to slice kiwi is with a wire hard-boiled egg slicer. It slices them the exact right thickness to achieve a slightly chewy, but a little crisp, kiwi.

This batch of kiwi dried quickly on the fruit setting (135 degrees).  It only took about 12 hours and yielded a not-quite-full quart-sized Ziploc bag of kiwi.  These dried kiwi will stay preserved for months--but they never last that long. :) 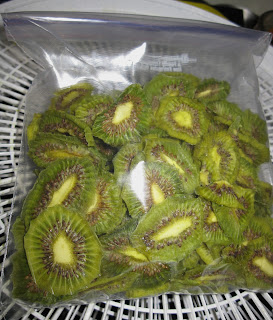 In a household of two (plus a dog), drying fruit is really handy.  It allows us to take advantage of sales to stock up and we avoid the problem of dealing with spoiled fruit. They also make great healthy snacks--most of which can double as dog treats (but fruit is full of sugar--so give in moderation).  Our dog loves this kiwi almost as much as my husband does.

Email ThisBlogThis!Share to TwitterShare to FacebookShare to Pinterest
Labels: Dehydrating