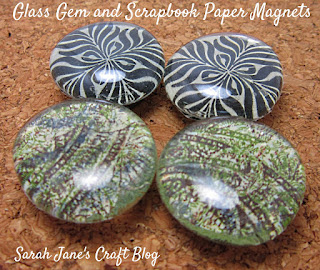 After making the glitter magnets, I felt the need to try out some of the other designs out there for using glass gems. Using scrapbook paper to make magnets seemed like the next logical project.

This is a crazy simple project. Grab your glass gems from Michael's or the dollar store (be sure to look for ones that are smooth without cracks or lines). Find some scrapbook paper or magazine photo. Cut the paper to the size of the bead and glue it on the back. Since the gems are not perfectly circular and each are different, I just held the gem to the paper and cut around it (you could trace around the gem or use an appropriately sized circle punch if you've got one).. 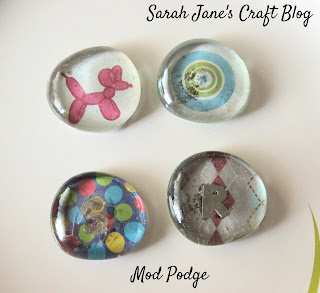 The only tricky part about this project, is that I have seen tutorials using all kinds of different glue. I had no idea what would work out the best, so I started by using Mod Podge. Mod Podge worked very well except it dried just a bit cloudy and left voids where there wasn't enough glue. It especially didn't work well for the shimmery scrapbook paper I picked out. It may work better with a matte surface paper, though. After that had dried, I saw an article about how someone had used hot glue. Great--I've got tons of hot glue--it's super cheap and dries clear. So I gave it a whirl. 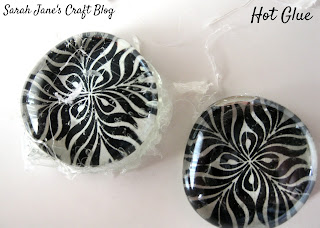 The high temp hot glue nearly burned my fingers off as I tried to adjust the paper and smoosh out the excess glue so that there were no bubbles or ridges. So I tried the low temp gun and it cooled too quickly to get it smoothed out at all. It ended up being a lumpy mess. So aside from maybe using it to glue the magnets on, I'm nixing hot glue completely from the recommended glues for this project. 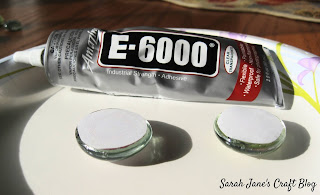 I tried E6000 glue next. And it worked pretty perfectly aside from being just a bit sticky. It dries clear--not cloudy. The gem on the right above, was done using E6000 glue (and the gem on the left--hot glue). And it works great for gluing on the magnets when everything is dry.

You will need the following:
clear glass gems/flat marbles (regular or large as long as they are smooth on the back)
scrapbook paper or other decorative paper of your choice
Mod Podge (and a brush) and/or E6000 glue
craft magnets

You'll also need a good small scissors, a paper towel for excess glue, and a surface to work on that can get glue on it. I like paper plates or sheets of parchment paper--but whatever works for you.

Step #1 Cut paper to the shape and size of your gem.
Step #2 Glue paper down with a dollop of E6000. Smooth paper and squish out any excess glue--wipe away with a paper towel. Let dry.
Step #3 Attach a craft magnet to back with a small drop of E6000. Allow to dry until magnets are secure (I usually wait at least overnight) before using. 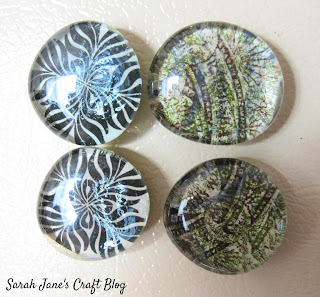 Notes: I recently saw a tutorial using silicon adhesive, I'll have to try that out next. I did try Aleene's Paper Glaze (similar to Dimensional Magic or Diamond Glaze) glue and it worked very similarly to Mod Podge, so if you have that around and don't have the other glues, it should work just fine. Also, the craft magnets you can buy at Michael's are just strong enough to stick the gem to the fridge and maybe hold a single thin sheet of paper--if you're looking for more than decorative magnets--buy the neodymium magnets--they are much stronger.