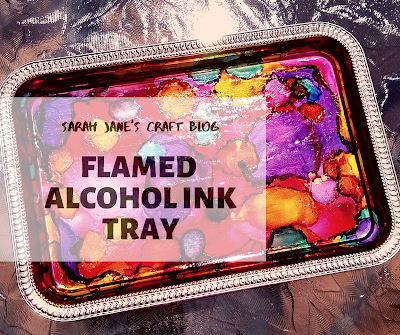 This project didn't go quite as expected in a couple of ways, but I wanted to share what I learned so you don't make the same mistakes I did. In the end, the project turned out ok, and I got to light alcohol ink on fire again (it had been a while), which is always fun. 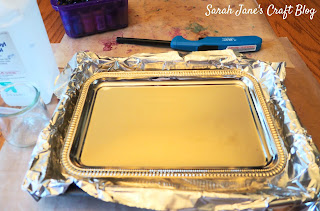 I found this small metal serving tray at Dollar Tree while I was picking up a few things, and I knew instantly that I wanted to try flaming alcohol ink on it. I cleared off my kitchen table of anything potentially flammable and put down a couple of craft mats (they are Teflon and silicone, so they are heat resistant), then I topped that with a cork trivet, and then lined a small cookie sheet with tinfoil and then placed my metal tray inside the cookie sheet. This may seem like overkill, but I was very glad I had taken precautions. 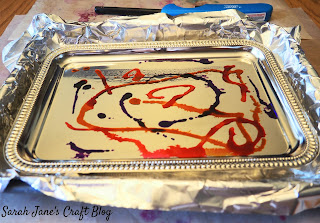 I squirted ink all over the tray. I started with Raspberry, Sunset Orange, and Purple Twilight inks. 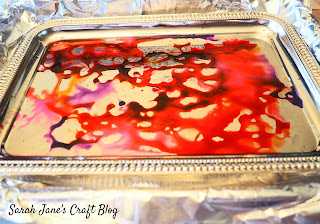 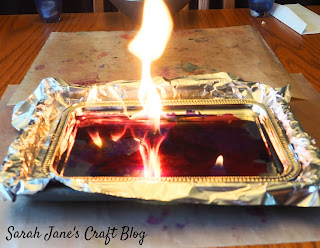 I moved my inks and rubbing alcohol away from the pan and then lit the liquid alcohol and ink mixture on the tray on fire. I am embarrassed by how large the flame got. I should have figured it would be a much larger flame than in previous projects since it was such a large flat surface and there was quite a lot of alcohol on the tray. The picture above is after it died down. I didn't bother taking a photo while the fire was big, because it was more important for me to just watch it. It died down very quickly, but lesson learned--larger projects like this need to be done outside with even more fire precautions--2 foot flames do not belong on the kitchen table. 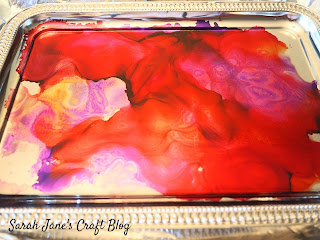 The flames mixed the ink and I ended up with this red-orange blob of ink with some pretty patterns. 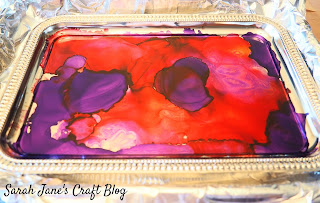 I added more ink to the tray, but this time I didn't add rubbing alcohol at all unless I wanted the ink to spread a great deal. I added ink and lit each pool of ink on fire. I started out with more of the purple ink. 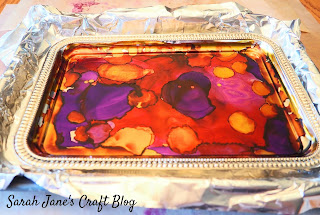 Then I added the last color from the Summit View set: Sunshine Yellow. I used the yellow and more of the orange to try to move the design up the small lip of the tray. 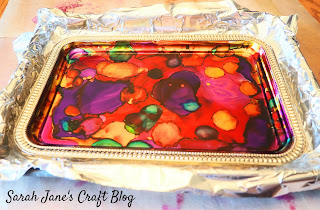 After I felt like I had good coverage with the Raspberry pink and the Summit View set, I added one last color--Turquoise. As I added all of these colors, I lit them on fire to mix and set the ink. The ink alone in these small pools, made small flames (usually an inch or two tall), but be careful to make sure the ink is done flaming (as it can sometimes be nearly clear or blue flames) before adding additional ink or rubbing alcohol. 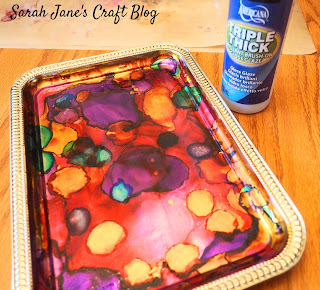 I let the ink dry for a few hours, and decided to try a new sealing medium. I usually use a spray sealer (like Kamar Varnish and/or and acrylic spray) or Mod Podge, but I had picked up some Americana Triple Thick Glaze and I wanted to try it out. It's a very different consistency than Mod Podge--more like Dimensional Magic or Diamond Glaze--but it's meant to be brushed on. So I squeezed some out and used a foam brush to brush a layer onto the tray. As I finished my coat, I noticed that where the glaze was thinner, it was starting to dry a bit and the foam brush pulled the glaze a bit and left little marks on the surface. I hoped it would level out a bit as it dried, but after letting it dry for a day, it still had a kind of rough surface. I remembered reading that you could add multiple coats, so I put on a second coat--this time being very liberal with my application to make sure it didn't dry out before I had a chance to brush it on evenly. About an hour later--I noticed really large cracks in the glaze. They smoothed out a bit as they dried, but were still visible.

I do think that the Triple Thick Glaze has potential as a sealer for Alcohol Ink. Even though I hadn't let the ink dry over night, it barely reacted with it when it was initially brushed on. The finish is very glossy, so I think with some trial and error, it could be an excellent sealer for washers or other small projects that you want a shiny finish on. If you want to add additional layers, I'd recommend going with very thin coats...and I'm not sure a foam brush is the best choice--a soft paint brush may be a better choice. I've got quite a bit left in the bottle, so I'll definitely be trying the stuff again to try to perfect the application. 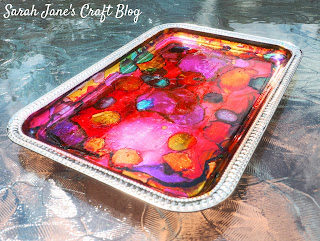