Alcohol Ink and a Lazy Susan 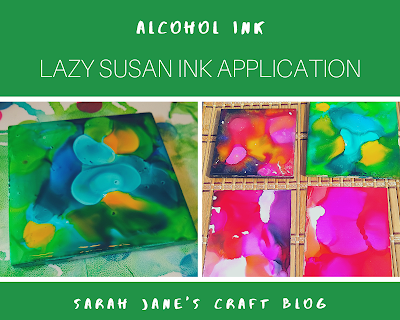 Ok, so full disclosure, I thought this one up as I was falling asleep. Usually, my great ideas while falling asleep involve not forgetting to do something that I invariably forget to do and stuff that doesn't make much sense (ex: If the sky was purple, would trees still look green? or What would happen if you put a ferret head on a snake? Cue the nightmares). So in the morning when I still remembered my idea, I paused and thought, "That could work!" And so this week I tried applying alcohol ink with the help of a lazy Susan (sorry Susans--I know a few of you, and you are definitely not lazy :)). 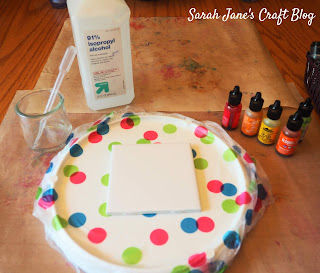 I pulled our plastic lazy Susan turntable out of the kitchen cupboard and covered it in Glad Press and Seal just to keep it from getting all inky. Then I grabbed a 4 inch ceramic tile. It's my go-to material for trying out weird application methods because they cost about 15 cents and are a great clean slate for inking. 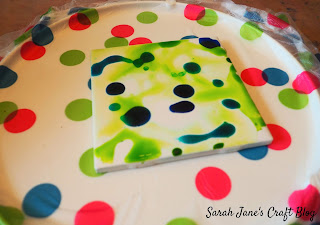 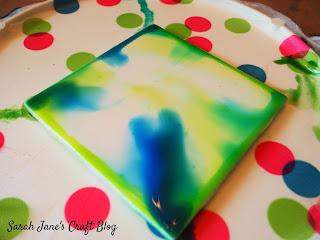 So I added more ink and rubbing alcohol and spun harder. And then it started to pull the ink to the outside edges. That's what I had hoped for...but then how do I get the whole tile covered? 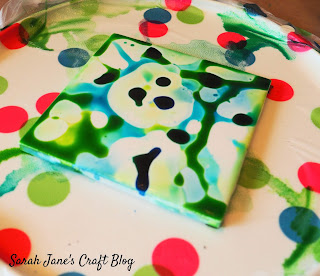 So I kept adding ink and spinning the lazy Susan. After a while, I stopped adding any rubbing alcohol and just added ink. 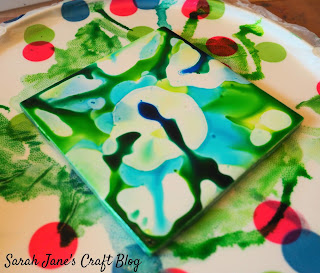 Slowly the tile started to fill with ink, and I started spinning it a little slower so the ink would move, but not automatically slide to the edges. 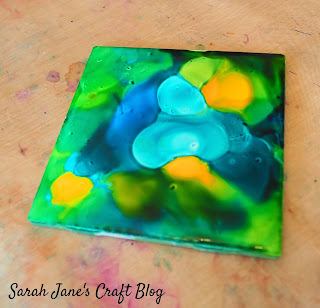 I used a bunch of blues and greens, but on the last spin, I added some yellow to add a pop of color. It was still really wet with ink when I quit, so I figured it would change a bit as it dried. 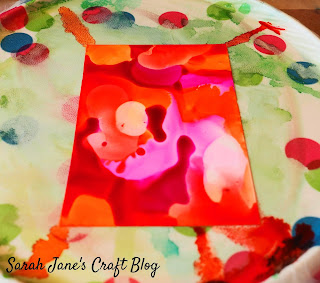 So it sort of worked on a ceramic tile, I decided to try out some Yupo. Yupo is a plasticized paper that feels kind of like photo paper--but with more of a satin finish. The ink sinks into the paper a little bit, so it seemed to work a bit better than the ceramic tiles. I used the same method where I started with extra rubbing alcohol and spun with more ink until it was covered. Since the inks are definitely going to mix with each other, I chose colors that would look good when mixing. For this one, pinks and oranges. 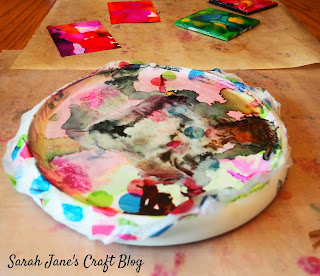 I tried it out and two pieces of Yupo and on two ceramic tiles with slightly different finishes. The overall results were the same. It kind of worked. But you'd get similar results from just tipping the material around by hand with loose ink on the surface. If you're looking for more of a splattered spin art look--you'd be better off using canned air. 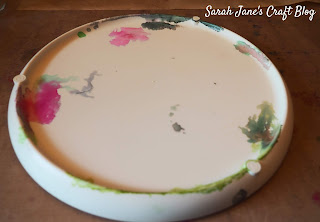 My lazy Susan got pretty inked up with the Press and Seal on it. I pealed it off and it had leaked through in several spots. So I can't recommend Press and Seal as a good craft mat substitute. If I try more lazy Susan applications out in the future, I'll probably use tin foil. Most of the ink did come off with some rubbing alcohol, but if I had let it dry, it would have been much trickier to clean off. 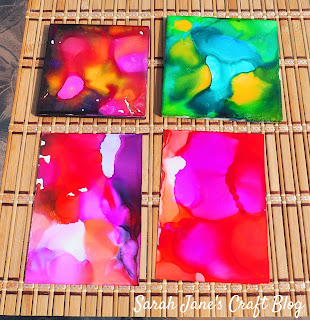 Even though my sleepy idea only sort of worked, I had a blast trying it out. It was so much fun spinning the alcohol ink that it makes me want to come up with something that works a bit better (I've already tried to get my husband to come up with a way to use a fidget spinner--but he's not biting). And the inked tiles and Yupo turned out pretty cool too!