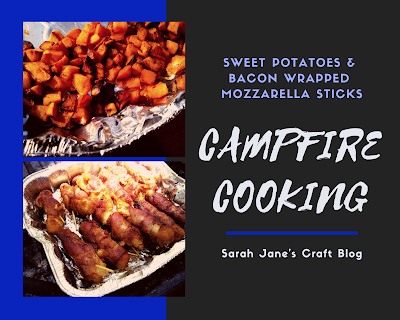 Last week I shared my ongoing quest to find the perfect recipe for homemade fire starters. While we were camping this year, we also tried some experimental campfire recipes that I thought I'd share. In past years we've made campfire quesadillas, campfire eclairs, and loaded fries. 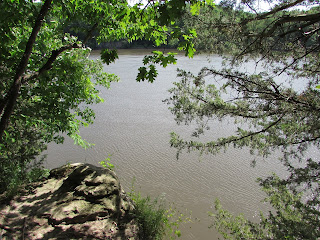 This year's experimental recipe was bacon wrapped mozzarella sticks. This genius idea came from a post on Pinterest with really simple directions, so I thought we'd give it a whirl. I mean, it's bacon and cheese...so there's no real losing here. 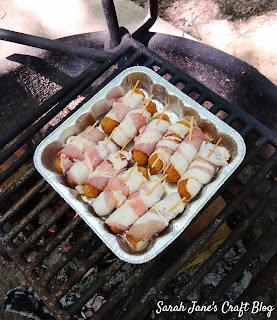 We started by packing a box of frozen mozzarella sticks in with our camping food. The day before we wanted to grill these, I put them in the fridge to thaw out (we camped in a cabin--but a slow thaw in the cooler would work too). They may not need a whole day in the fridge, but they need to be thawed out enough that you can stick a toothpick in them to keep the bacon wrapped tightly. Right before grilling, I wrapped a half a strip of bacon onto each mozzarella stick and poked a toothpick in fairly horizontal so that it wouldn't interfere much with rotating the sticks when cooking. I had soaked the toothpicks in water so they wouldn't burn. 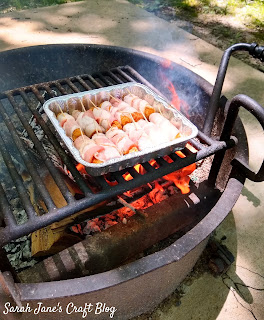 Then I lined them up in a pan and put them over the campfire. The fire had been burning for a while to get some coals going, but there were still flames. 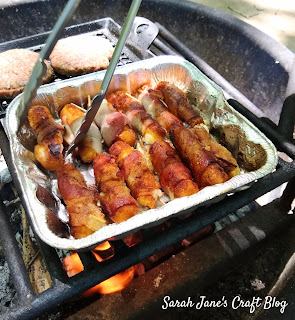 The bacon started sizzling immediately and we watched them turn golden brown. It was really mouth watering. When the bacon is fairly cooked on one side, flip the sticks to a less cooked side until they are completely golden brown and delicious on all sides. 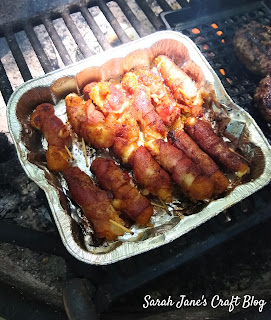 They appeared pretty appetizing and some of the cheese sticks were starting to explode and/or fall apart, so we pulled them off the fire. 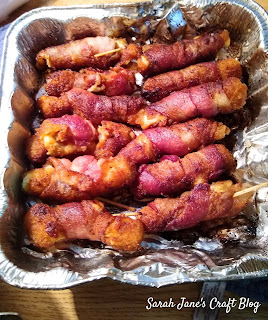 We were expecting these to be amazing, because they looked so darn appetizing. But they were just ok. The bacon grease soaked into the cheese sticks a bit, making them less crunchy on the outside. The ones that were falling apart were crunchier and tastier. But, on concept, you can totally cook bacon wrapped cheese sticks over the fire--they just needed a bit of fine tuning. Maybe they were too thawed out, maybe they should have cooked longer, or maybe another brand would work better (we used Farm Rich). But these were good enough that we'll probably keep trying. 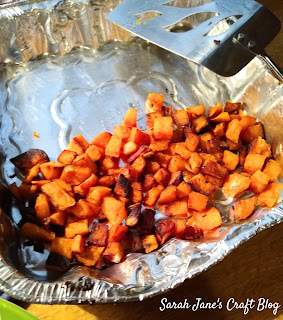 We also tried cooking some other less greasy sides on this cooking trip. We tried out frozen green beans (they were a literal flop--I think fresh might work better), cheesy hash brown potatoes (we thought small cubed potatoes would work better than the frozen fries we used last year but never quite got it right), and sweet potatoes. The sweet potatoes were the winner. They were great! I just threw two sweet potatoes into the camping food bag. I washed them off and chopped them up into 1/2 inch cubes and then threw them in the tinfoil pan with 4 caps full of vegetable oil (so 3-4 tablespoons). I seasoned them with salt and pepper and we cooked them over the campfire until they were starting to get tender before throwing our meat on the fire and finishing them up. They were tender and slightly crispy and very tasty. We were both so surprised they had turned out, that I only got a picture of them after we had eaten half the pan. They were easy, tasty, and not totally unhealthy (unlike the cheese sticks), so they will definitely be returning to the menu on our next camping trip. 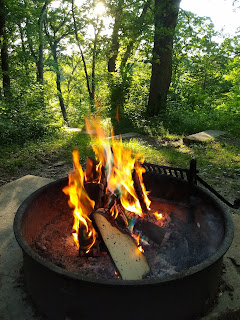 We had a great time on our big camping trip this summer! I can't wait to try out these recipes over a campfire again!
Posted by Sarah Jane at 8:00 AM

Email ThisBlogThis!Share to TwitterShare to FacebookShare to Pinterest
Labels: camping