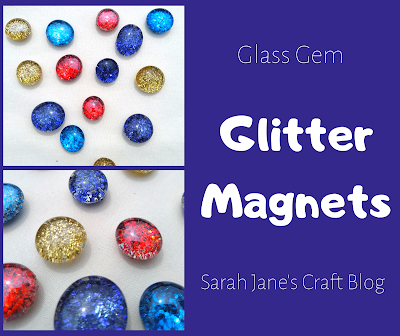 I've been going through some of the oldest posts on this blog to update them a bit (make sure the links work, etc...) and after updating my post on Glitter Magnets, I knew I needed to try it out again. It was only the second craft I did for the blog over 7 years ago, so I thought I'd give it a revisit this week. 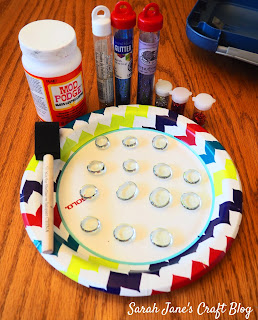 You'll need:
Glass Gems/Flat Marbles
Mod Podge and a foam brush
glitter of your choice
a work surface (a paper plate works well to contain the glitter)
magnets and glue to attach (I used e6000) 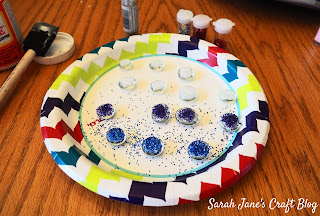 I grabbed some glass gems from my craft stash and a bunch of old glitter and put the gems flat side up on a paper plate. Then I painted all of the gems with a layer of mod podge. Then I started covering them in glitter. 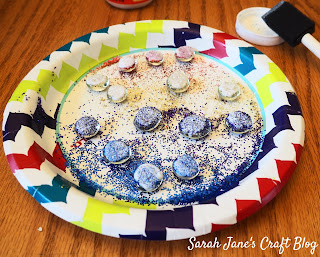 After the gems all had a layer of glitter on them, I let them dry for about an hour before coming back and repeating the process. This time I poured some mod podge into the cap to paint onto the gems and started with the lightest glitter as the glitter sticks to the glue a bit. Then I poured another layer of glue onto the gems. With the glue in the cap, I rinsed it out in the sing along with the foam brush to avoid glitter transfer. When I came back to check on them an hour later, the glue was still white, so I let them dry overnight before topping them with yet another coat of mod podge just to keep them from shedding glitter. 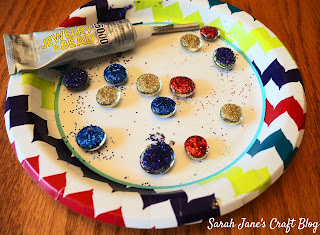 After the sealing coat dried clear, I used some e6000 glue to attach some small neodymium magnets. The magnets I used were about a quarter of an inch in size--pretty darn tiny, and I wouldn't recommend them for any house that has small children or pets that like to eat things. That being said, they are surprisingly strong and work perfect for these little fridge magnets. You can get them in larger sizes that might be a bit safer, too. 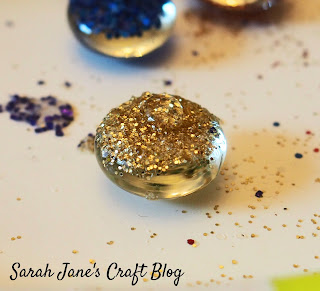 I put a tiny drop of glue on each gem and then placed the magnet on and let it dry overnight before hanging them up. 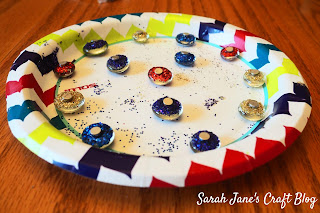 These magnets are so strong that you need to place them strategically on your plate or the magnets will pull out of the glue and attach to each other. This was just about as close as they could get before being attracted to each other. Weaker magnets won't have that problem. 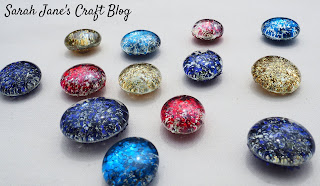 This was a fun glittery project and could definitely be modified to be a kid or teen craft. Finer glitter seems to have better coverage, and I probably could have managed a third coat of glitter if I wanted. If you like glitter, but hate the shedding, make sure you have a good sealing coat of mod podge (maybe even coat it twice) over the glitter before attaching your magnets.