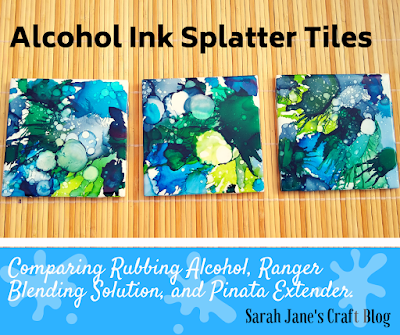 I'm pretty thrifty, so even though I've been pretty obsessed with alcohol inks for the last few years, I've been too cheap to buy the blenders and extenders that the ink companies sell. I use rubbing alcohol to thin my ink and clean up after my projects. It's worked well, but I've always wondered if the specially created thinners would work better. So I broke down and bought Ranger's Blending Solution and Pinata's Extender to compare with my usual 91% rubbing alcohol (70% works pretty similarly if that's all you have at home. I tried that out in another post.). 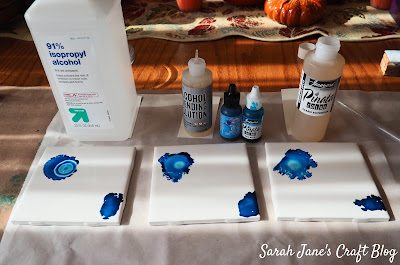 So I laid out three ceramic tiles (all bought at the same time from the local hardware store) and decided to compare how each of these thinners worked. I used Pinata's Baja Blue and Ranger's Sailboat Blue as a basis of comparison. The Pinata ink is in the lower portion of the tile (and has dried) while the Ranger ink is in the upper portion of the tile and has just had the thinners applied. I used two drops of the Pinata ink and one drop of the thinner on each tile and three drops of the Ranger ink and one drop of thinner.

The ink reacted slightly differently when the thinners were first dropped onto the inks (as you can see in the upper drop that hasn't dried yet), but they dried to a very similar appearance. The extender seems to react with the color of the ink less and instead spreads the ink. The rubbing alcohol will turn the ink white before mixing with the ink and smoothing out. The main difference in the reactions was that the Pinata ink was thicker and didn't spread as much or become as translucent. This didn't differ between thinners. 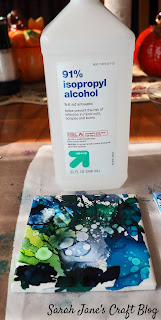 So I decided to test out how the different thinners behaved when blown with canned air. And for the most part, the ink thinned out the same. The rubbing alcohol is a bit more liquid, so the ink moved around a bit more freely and with less control when using the rubbing alcohol than with the other thinners.

To finish my testing, I tried the splatter technique that creates little cells in the ink when emptying a nearly empty eye dropper or pipette onto the ink. I knew the rubbing alcohol would work, but I needed it for the comparison. I emptied just about all of the rubbing alcohol out of the dropper and squeezed the air through it to force out tiny droplets. The alcohol created distinct circles and cells in the ink. 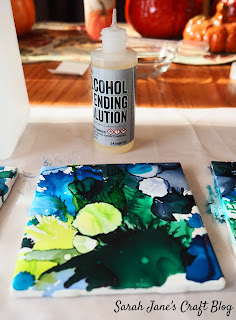 It was tricky to get the blending solution into a dropper since it comes with it's own squeeze tip. The blending solution didn't react quite as much with the ink and wanted to come out in larger drops (like the light green ones in the center of the tile) since it's thicker than the rubbing alcohol. 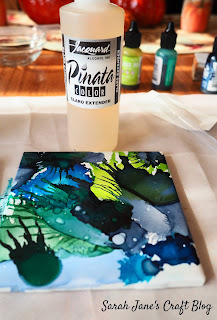 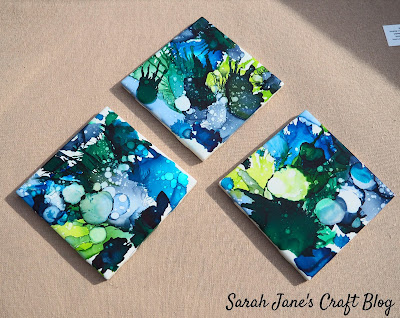 I completed the tiles by splattering a little rubbing alcohol on all of them so they had matching patterns of drops. They turned out pretty cool, and in the end, I have decided that more testing is needed to determine if the name-brand thinners are worth it. My initial reaction is that since they cost 2 to 3 times as much for significantly smaller bottles than the rubbing alcohol, that for the casual crafter or beginner inker, they just aren't worth it.
Posted by Sarah Jane at 8:00 AM