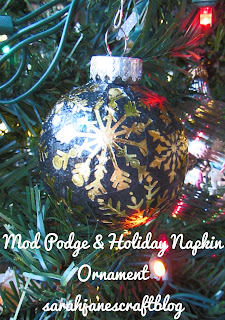 Last week I shared a project made with a package of clear plastic ornaments I got at Michael's. This week I used the same ornaments with mod podge and some holiday napkins to create some cute ornaments. I saw these black napkins at Walmart and thought the foil snowflakes were really pretty, so I bought a pack to craft with (and maybe use as napkins, we'll see :)). 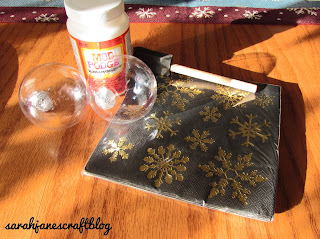 So I got out my glossy mod podge and a foam brush and two of the plastic ornaments (and a paper plate to work over). 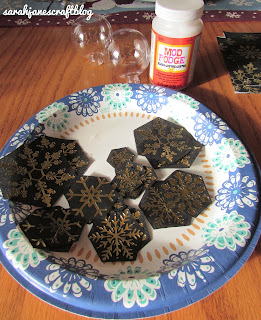 After opening the package of napkins, I found that only the front fold was foil embossed, the rest of the napkin was covered in gold ink--still cute, just not as cute. So I cut out the foil snowflakes from 3 of the napkins for my 2 ornaments (that's 2 napkins' worth on the plate above). I used a regular scissors and cut hexagonal shapes around the snowflakes. The embossed shapes meant that the black napkin was pretty well adhered to the second layer of the napkin. If your layers come apart or are loose once you cut your shapes, just pull the backing off and use the top layer. 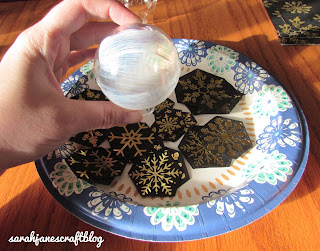 Then I spread a thin layer of mod podge onto the ornament with my foam brush. Be careful not to use too much glue--the napkin will wrinkle/bubble and it will be more likely to tear once the glue has soaked in. 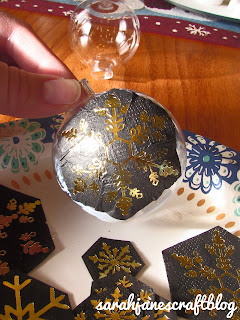 I pressed one of the snowflakes into the glue from the center out, creasing the napkin along the edges to get it to wrap around the spherical shape. 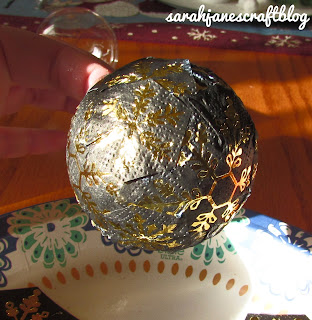 Then I just continued gluing snowflakes onto the ball until it was completely covered. I tried to make sure all of the edges were glued down, but there were probably a few loose edges and creased napkin areas that could be glued down, but I let it dry instead so I didn't rip the napkins while they were wet. 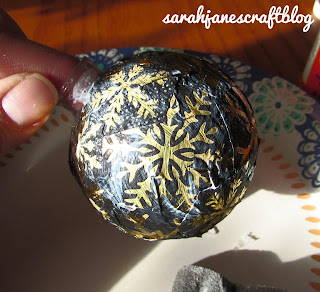 Then I worked on the other ornament while I let the first one dry. By the time I had covered the second ornament, the first one was ready to be sealed. I glued down a few loose edges and them put a thin layer of glue over the whole ornament--smoothing as I went. 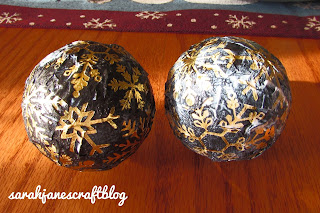 The photo above shows the first ornament beginning to dry, and the second ornament after I had just finished it's sealing coat. I left them for about an hour and they were ready to hang. 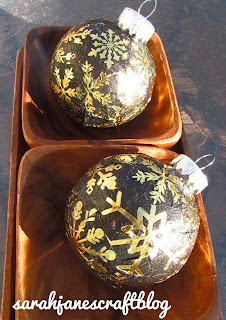 These turned out really cute--a bit wrinkly from trying to wrap something flat around a sphere--but really cute. As I was doing the project on these new ornaments, I realized that you could totally use old beat up colored ornaments for this project too. I may have to find a few old ones to upcycle. Happy crafting!