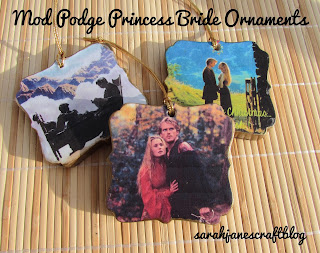 I hope everyone had a fantastic Thanksgiving! The weekend after Thanksgiving is often filled with shopping and decorating for the upcoming Christmas season. We got our lights put up outside, the stockings hung on the mantle, and the tree is up with lights on it--but it isn't decorated yet. I have a ways to go to be ready for Christmas, but at least we're headed in the right direction. Every year I make new ornaments to add to our tree, but this year I was involved in an ornament exchange with an online group, so I also needed to send an online friend an ornament. We are both big fans of the Princess Bride movie, but it's pretty hard to find Christmas ornaments with characters from that movie on them, so I decided I should make my own. 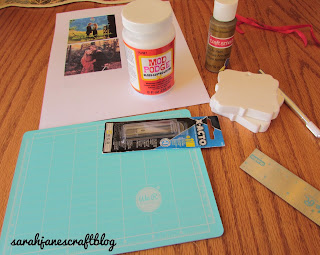 I went to Michael's looking for ornament blanks, but I couldn't find any round or square ones, but they did have these fancy ceramic ones--and they were on sale, so I grabbed a few. I went online and printed out some screenshots from the movie in roughly the right size for the ornaments. 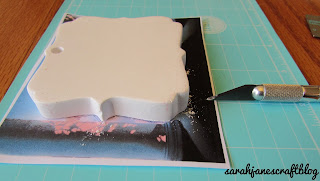 I figured the easiest way to get the printouts the right shape would be to cut around them with a craft knife, but that didn't work out quite as planned. The craft knife didn't cut the curved shapes out neatly and carved bits of the ceramic off in the process. 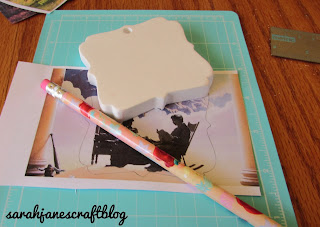 So I switched to plan b and used a pencil to trace the shapes and cut the paper out with a scissors. The proportions weren't completely symmetrical, so I had to flip the ornament over to trace the image I planned to put on the back side, but otherwise, this method worked pretty well. 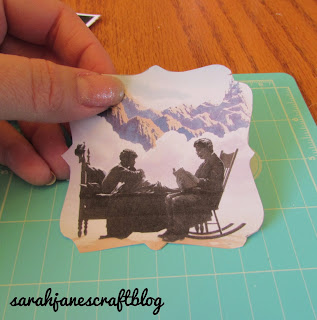 I cut out 6 images to make 3 ornaments. Most were screenshots from the movie, but the one above might be fan art inspired by the movie poster. I erased any pencil lines that were left on the images before I moved on to my next step. 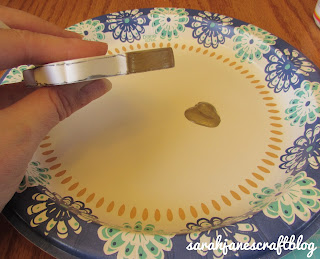 I gave a coat of gold paint to the edges of my ornament blank before I glued on my images. You can see the pencil lines from tracing the paper on the edges of the ornament. The gold paint covered the pencil marks and gave it a finished look. 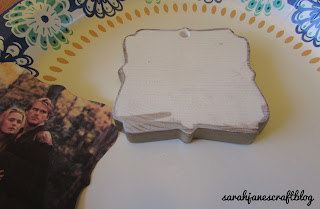 Next, I used a foam brush to paint a thin layer of mod podge onto the ceramic blank. I painted on a smidge more than I would on a less porous surface because I was worried it would soak into the unfinished ceramic. It didn't soak in too bad, and I was able to adjust the paper to fit the ornament after I put it on the glue. 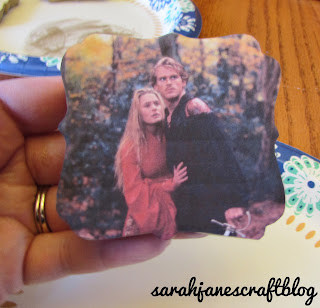 I smoothed the paper out from the center to make sure any excess glue would work out to the edges. The paper remained pretty smooth, but if you use too much glue, you might have some bubbling or wrinkling. Don't panic if it wrinkles a bit--they usually disappear as the paper dries.

I repeated this process, gluing all 6 images onto both sides of the ornament blank. I then let them dry before doing anything else. The paper can become fragile when it's wet with glue, so it's best to let it dry to avoid ink smearing or paper tearing, etc... 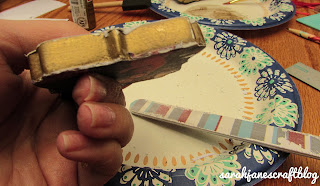 After letting them dry for about an hour, I came back and trimmed the paper that hung over the edges of the ornament. Tracing the ornament got the paper close to the right size, but there were excess bits. Any larger overhangs, I trimmed with my scissors, but the rest, I did my best to file off with an old nail file. The picture above is mid-filing. I didn't get all of the paper off with this method, and I scuffed up the paint in the process, so when I got it as cleaned up as I could, I came back over the edges with my gold paint to clean everything up. 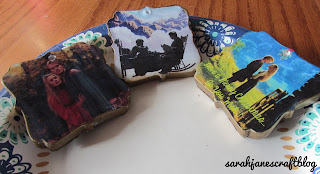 Once the paint had dried, I used my craft knife to cut out the holes in the ornament, then I painted a thin layer of glossy mod podge over the ornaments to seal them. 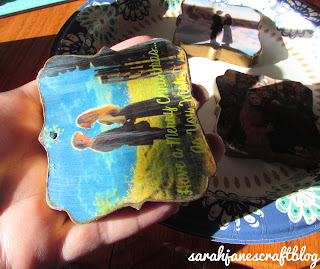 I painted very thin coats to provide a more professional finish. Since they were so thin, I painted both sides of the ornament twice, allowing it to dry in between. On my last coat, I also painted over the gold edges to seal them and make it less likely to chip or ding the ornament. 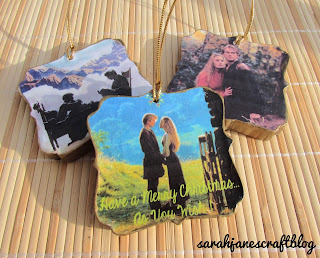 Once the mod podge was dry, I strung them up with some gold cording to match the edges. These turned out great. They were pretty easy aside from the shape of the ornaments. The irregular shape caused some extra steps but made for a cute finished ornament. I hope my ornament exchangee likes her ornament, and I can't wait to hang mine on my tree.