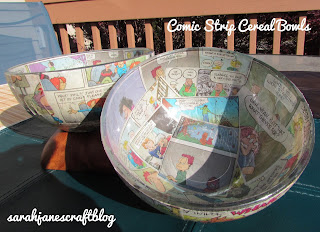 A while back I bought some Dishwasher Safe Mod Podge with the intention of using it to seal some alcohol ink projects (go figure), but when I came across these nice big glass bowls, they were just begging to be decoupaged. So I thought it might be cute to decoupage cartoon strips from the Sunday funnies onto the bowls. I knew this would be the perfect test of the dishwasher safe part--because who's going to use cereal bowls that can't be safely washed? 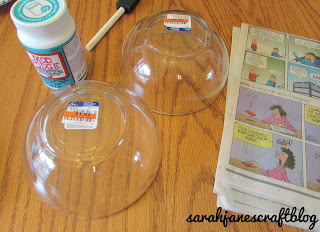 I found the cereal bowls at Big Lots. I'm sure I bought them on a 20% off day or something like that, so they were pretty inexpensive if the ended up being sacrificed in the name of an experiment. I grabbed a copy of the Sunday funnies and a foam brush and I was set to go. 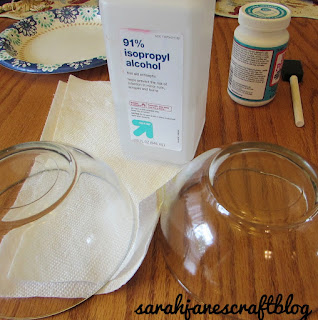 I cleaned the labels off of the bottom of the bowls and then read the instructions on the mod podge. They recommend cleaning smooth surfaces (like glass and ceramic) with rubbing alcohol before gluing anything to them. Fortunately, I buy rubbing alcohol in bulk (for the alcohol inking), so I had plenty to wipe them off with a paper towel. I let them dry and moved on to my comic strips. 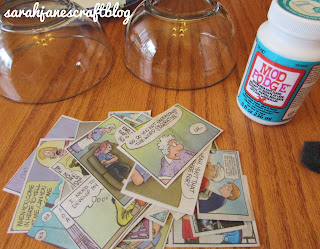 I cut one or two squares (or panels) out of each comic strip until there weren't any whole ones left. I tried to feature the comics I enjoyed the most and picked the most interesting panels. I just used a regular scissors to cut them out. One Sunday's worth was just enough to cover my two bowls. 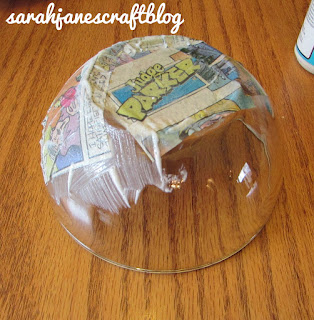 Next, I applied the mod podge with a foam brush. I was generous with the glue so that the paper would adhere to the glass well, and so that it would soak the glue up a bit and become pliable enough that it could be wrapped around the curved surface a bit more easily. You can spray paper with a bit of water to help make it more flexible and avoid some of the wrinkling when using mod podge, but this only works if the paper is pretty sturdy. Tissue paper can't be wetted down without tearing. Newspaper print is somewhere in between tissue paper and copy paper. It's fairly porous and delicate, but not as delicate as tissue paper. I opted not to wet the paper down because I wasn't sure how fragile the paper would become when wet. I didn't have any problems with ripping from just the glue, but I did have some issues with wrinkling and shrinkage (the paper shrinking after it dried completely). 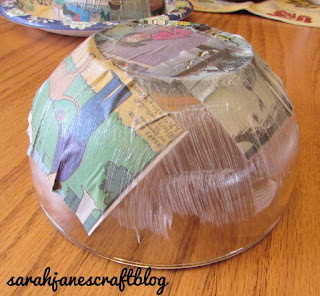 I worked my way around the bowl, adding panel after panel and gluing both under the paper and coating over the top with the glue. I made sure to turn the panels upside down as I was gluing them so that they'd be right side up when the bowl was flipped over. When I got to the edge, I lined the panels up with the edge of the bowl and tried to glue them down as neatly as possible. 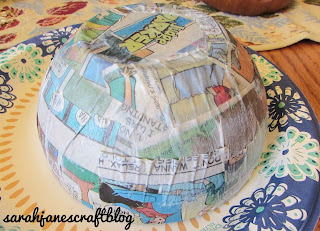 When I was done, I was left with a pretty wet wrinkly mess. At this point, I wasn't sure at all how this would turn out once it dried. 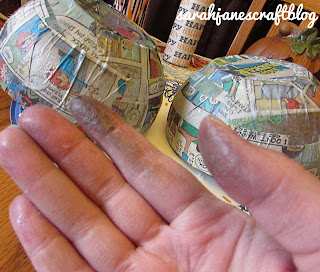 After gluing on the paper, my fingers were covered in newspaper print ink that had been glued to my fingers with the mod podge, it took a bit of scrubbing to get them clean. 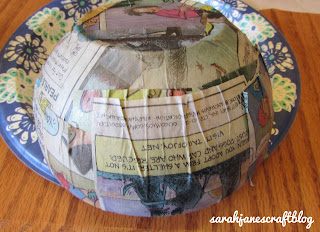 After the first coat dried, it hardly looked like it had been sealed at all. Some of the paper had shrunk as it dried. I had to go back in with a few small squares to cover some gaps that became visible when the paper dried. Several corners of the paper were also peeling up, so I glued them down before adding another sealing coat. The bottle suggests 2-3 coats with at least a few hours of dry time between coats. I coated the bowls 3 more times allowing at least a day to dry between each coat. 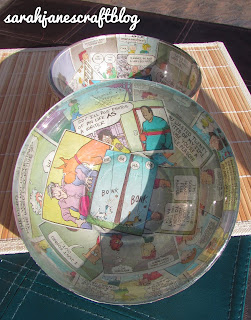 So the final verdict--I can't tell you yet if this stuff works. The bottle calls for at least 28 days of curing (drying) before it can be washed. So I'll have to update you later. The paper is glued securely to the bowl, and after a few coats, it does finally start to look a bit sealed, but the dishwasher-safe stuff doesn't provide the same kind of coating as regular mod podge. The glue is thinner and soaks into the paper more. I'm tempted to put another coat or two on to make sure all of the little wrinkles and edges are securely sealed before I let it cure for its 28 days. As long as they don't turn into a pile of wet glue-y paper after being washed, I've at least made some cute candy bowls. Cross your fingers with me that these can actually be washed, and I'll be sure to let you all know how it turns out when I do.

Update Jan. 2017: Will it wash? Check out the result here: Dishwasher Safe Mod Podge?
Posted by Sarah Jane at 8:00 AM