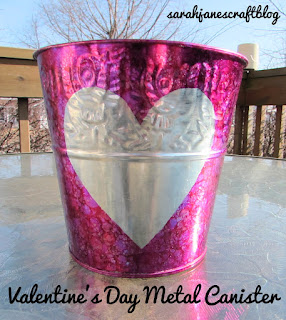 A couple years ago I found a metal flower pot at Dollar Tree and decorated it for Halloween. I've used it every fall as a candy dish and it's held up really well, so when I saw another one of these metal flower pots at Dollar Tree, I grabbed it and decided to make a Valentine's Day Canister. 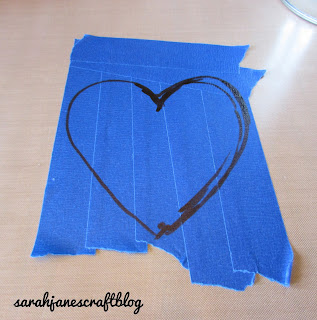 I started out by grabbing my alcohol ink supplies (inks, rubbing alcohol, applicator, felt, craft mat). I got some new craft mats (mostly so they'd be less dingy looking in the blog photos). In addition to my inking supplies, I also grabbed a roll of painters tape. I laid out some strips of tape to make a small sheet on the craft mat, and then I used a permanent marker to freehand a heart. It was a bit sloppy, but I knew it would get the job done. 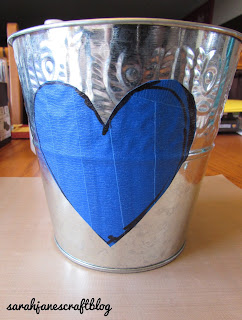 I carefully peeled the sheet of tape up off of my mat and cut it out with a scissors. I had to go back over a couple spots with my scissors because the tape had stuck to the blade and left some uneven lines. After it was cut out, I stuck the heart onto the metal canister as close to the center as I could. 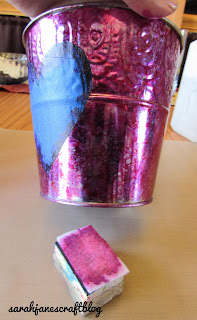 Then I started stamping the ink on. I used 4 colors of alcohol ink: Raspberry, Watermelon, Wild Plum, and Salmon. These color names aren't terribly descriptive. Raspberry is a hot pink, Watermelon is a pinky red, Wild plum is slightly purple magenta, and salmon is a coral-y pink. The ranger inks have several shades of pink, so I'm sure other color combos would work just as well. I have quite a few of the sets from Ranger, but I don't have either of the sets that have a truer red, or I could have gone that route instead. But the pink came out beautiful and bright.

I made one pass over the canister with the felt and as I ran out of ink, I added some rubbing alcohol to thin things out and finish covering the whole surface. Then I grabbed a clean felt and added more ink and stamped over any of the areas that seemed too washed out or smeared from the rubbing alcohol. Then I had to put some ink along the edge of the felt to stamp along the rolled edges of the flower pot on the top and bottom. 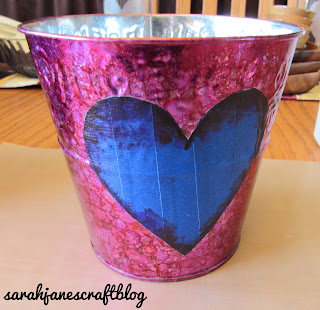 Considering how much ink it looks like I used to cover this fairly large surface, it wasn't that much--probably about 20-30 drops of ink all told. After I had covered all of the nooks and crannies, I set the pot aside to dry for a few minutes. 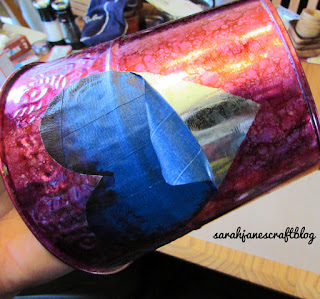 Alcohol ink dries pretty quickly, so after that few minutes, I was able to carefully peel up my heart. Since it was such a simple shape, there was hardly any bleed-through. I didn't even have to clean up the edges. But if you do have some ink bleed under the edge of the tape, just put some rubbing alcohol on a q-tip and run it along the edge to clean it up. 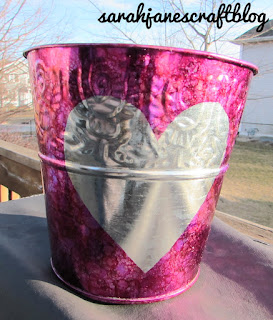 I think it turned out great and was a fairly simple and quick project. It turned out such a vibrant shade of pink, too. I can't wait to fill it with goodies!