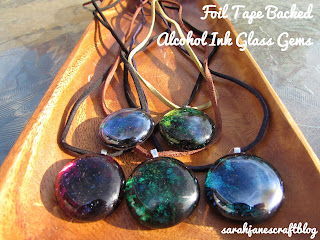 My most popular blog post is a project where I stamp these large 1-inch flat glass gems with alcohol ink. It was so popular that I made a second post on it after I got some new alcohol ink colors. I then tried a couple of methods to make the gems more opaque and get the colors to pop. I tried aluminum foil and spray painting the backs white. I even did a round-up post because I had done so many projects with glass gems that it seemed like a good idea to keep them all in one place. But then a reader made a comment to one of the posts about using foil tape on the back, and I thought that was such a great idea that I just had to try it out. 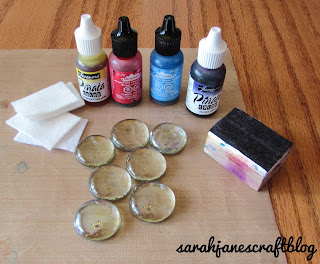 Since the last time I made gems, I also acquired some of the Pinata alcohol inks to go along with my Ranger inks, so I was excited to try them out on the glass. I grabbed my craft mat (parchment would work too), some inks, my applicator, some felt squares, and some clear glass gems. The last time I made a Dollar Tree run, they didn't have completely clear glass gems, they were slightly iridescent, so I thought I'd give those a whirl and see if they worked. 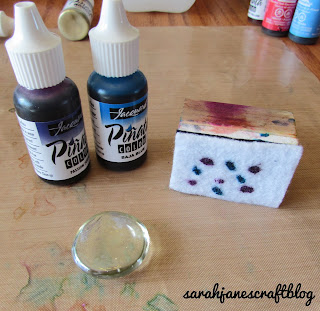 I dripped some ink onto the applicator and flipped the gem over so the flat side was up and stamped the ink onto the gem until it was completely covered. I had to stamp several times to get complete coverage, then I let the gems dry for a bit while I worked on the other gems. The first coat tends to blend together into one solid color. Then I came back to the gems and added additional color to make them more variegated. I didn't notice too much difference between the Pinata inks and the Ranger inks in this project except that the Pinata inks were a bit stickier and would sometimes cause the felt to stick to the gem. I'm sure a little rubbing alcohol would fix this problem, but I didn't add any to the felt because I wanted to keep the colors dark and saturated. 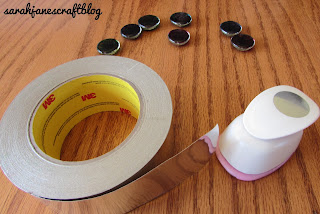 After the ink was dry (just takes a few minutes), I grabbed my foil tape (it's the kind you can buy at the hardware store) and used a 1-inch circle punch to create circles to apply to the back of my gems. 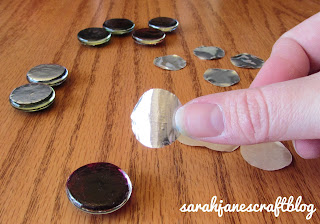 Because I was putting foil on the back, I didn't seal my ink with anything, I just stuck the foil stickers on to the back after I peeled off the paper backing. It was a snap. 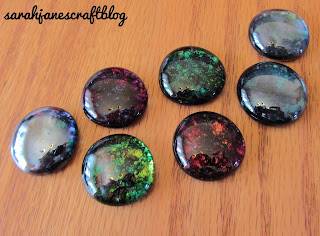 They turned out really neat. They shimmer when they are turned at different angles and probably look the most like real stones of any of the alcohol ink gem projects that I've made. The foil tape was a lot easier than gluing aluminum foil circles on the back and produces a smoother shinier finish. 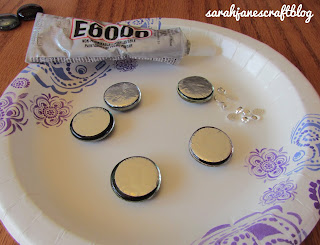 Next, I grabbed some glue-on bails and some E6000 glue and made my gems into pendants. After they dried (takes at least a half an hour for the glue to dry), I used some suede cording to string them up. 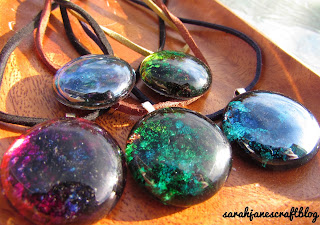 These turned out really pretty. I'm not sure I'll use the iridescent gems again (though it seems those are the only large clear ones that Dollar Tree is currently carrying) as the ones that were the most iridescent made it difficult to see the alcohol ink colors, but the foil tape worked a charm, and I can't wait to use it again.