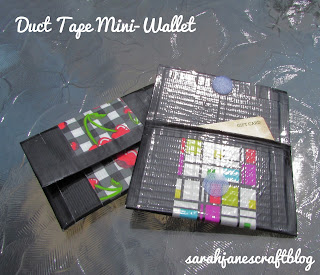 A few weeks ago I went to the State Fair for the first time in a few years. I knew I needed to bring a purse, but I wanted to bring something smaller than I normally carry. I had the perfect small cross body purse, but my wallet was too big for it. I ended carrying my cash in my pocket and everything else I needed in my purse (cell phone, car keys, ID, etc...). So after I got home I decided to make a mini-wallet out of some duct tape. I wanted it just big enough to fit my driver's license, a credit card or two, and a bit of cash. You could stick it in your pocket or in a small purse or larger phone carrier. After a couple trials, this is what I came up with. 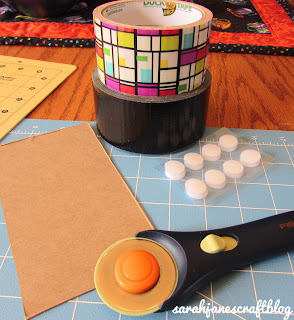 From my past duct tape projects, I knew that using a rotary cutter and a cutting mat is the easiest way to work with duct tape, so I grabbed those and some coordinating duct tape, a piece of thin cardboard from a food box, and some adhesive hook and loop circles. 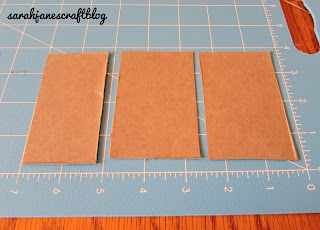 I cut my box (one side of an Emerald nut 100 calorie pack box was the perfect size--but a cereal or cracker box would work great too) using a gift card as a template. I cut two pieces the same size as the gift card and was left with a slightly smaller piece at the end to use for the wallet's flap. I laid them out on my mat with a bit of space between them to get the size for my duct tape sheets (it ended up being 4 inches by 7 1/4 inches). 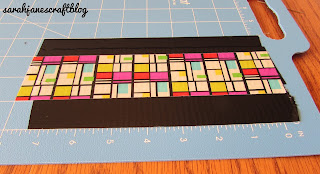 I then laid out three pieces of black duct tape along the lines of my mat and then I centered a piece of patterned duct tape over the top down the center. 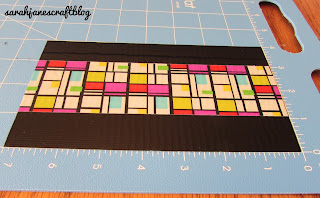 I used a straight edge and my rotary cutter to clean up the edges. 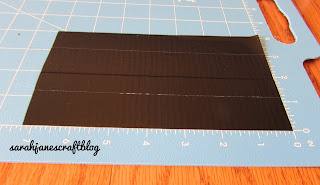 Then I made a second sheet the same size, but all black (as it will be the inside of the mini-wallet). 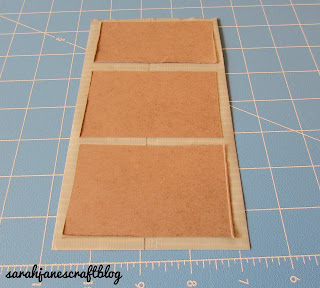 I laid out my cardboard pieces onto one of the sheets of duct tape with the two card sized ones on the bottom and the smaller one at the top. I left a bit of a gap between everything for folding and tape adhesion. 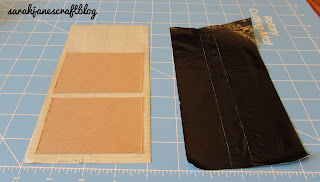 I also made another one with no cardboard in the flap. I laid it out with the two card sized pieces of cardboard on the bottom. 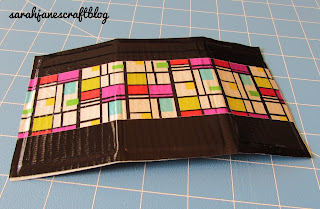 Then you put the other sheet of tape onto the cardboard covered piece. Be careful when you're setting it down since duct tape to duct tape is really sticky and hard to pull apart. If there's a tiny bit that doesn't line up, that's ok, it will be covered with edging tape. 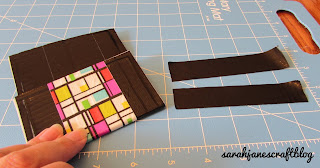 Fold your duct tape sheet where there isn't any cardboard so the patterned duct tape is on the outside. Then measure the side of the mini-wallet with the flap open. Mine turned out to be about 4 1/2 inches. I laid out a strip of black duct tape and cut it in half (and trimmed the edges neatly). 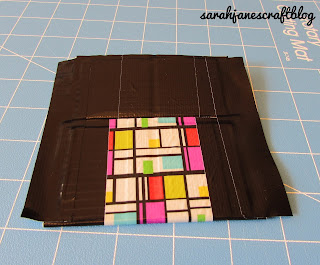 Then I laid the tape on both sides and folded it over the edges. 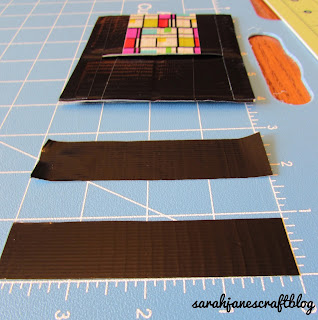 Then cut a piece of black tape in half that's the width of the wallet (4 inches in my case). 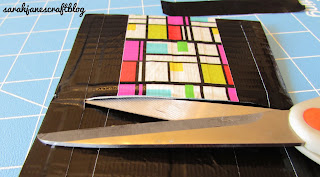 Then use a scissors to cut the edging tape along the opening of your pouch. On the first one that I made without the cardboard in the flap, I edged the short side first before taping the long sides down. I didn't like how that edge was unfinished after I trimmed the opening, so this time, I put that tape on last. 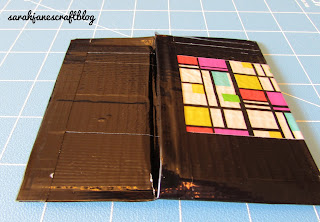 I taped along the top edge and along the pouch opening. It was a bit tricky to tuck it into the pouch, but not too bad.

I ended up with two mini-wallet pouches--one with a cardboard flap and one with a soft flap. They both seem like they'll work just fine, so time to find an enclosure. 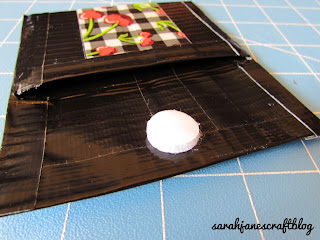 You could hot glue on snaps or make a button closure or some kind of belt strap type closure, but I went with the easiest option, sticky velcro circles. Stick the two sides together and then stick it to the pouch. Then all you have to do is close the flap to stick it to the mini-wallet. 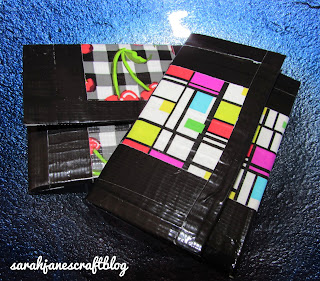 I can't wait to try these little pouches out. Maybe for when I don't want to take my purse to work or to the concert I'm going to next month. They seem like a perfect fit.