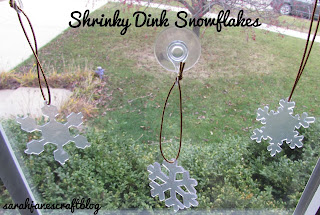 It's that time of year again--time to start crafting Christmas ornaments! I decided to give something a little different a try. A while back I used #6 clear plastic from cookie containers and take out containers to make homemade shrinky dinks. I decided it would be fun to make ornaments using this process. Snowflakes seemed like a good idea since they are clear-ish in the real world. 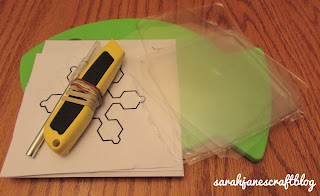 So I gathered up some supplies--a craft knife (I used an xacto brand craft knife, the box cutter also in the picture didn't make the cut--literally), a scissors, a cutting board, my #6 plastic sheets, and some print outs of snowflake templates that weren't too intricate. I picked some from a Google search that used all straight lines, and then I blew them up in Word so they were about 5 inches wide. I knew from experience that this plastic shrinks a lot so I wanted a pretty big snowflake. 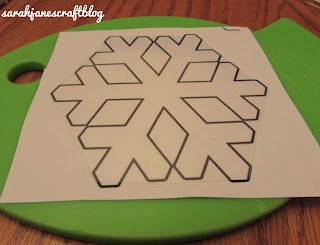 I first cut my plastic out to the shape of my snowflake, and then I followed the lines with my craft knife. It didn't cut all the way through in most places, so it was just scoring the pattern. 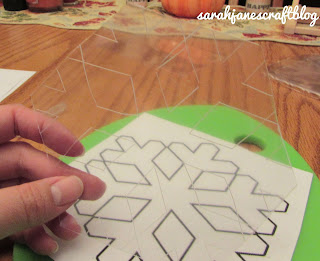 Once the pattern was scored, I could very carefully snap the cut pieces out of the plastic. I found that bending with the cut and not against it made it much easier to snap out. Any place that the plastic didn't want to pop out, I cut again by dragging the craft knife over the area. 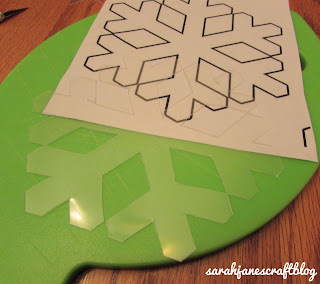 Once the snowflake was all cut out, I cleaned up any edges that tore when I was removing the plastic and punched a hole using a regular hole punch so that I could hang a string from it after it shrunk. If it isn't perfect at this point, don't panic. The shrinking will hide a lot in the way of slightly crooked cuts. 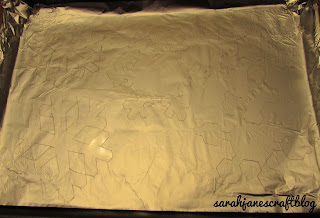 I cut out 5 snowflakes. 3 Large ones and two slightly smaller ones out of some thicker plastic. The thicker plastic ended up having to be cut out mostly with a scissors. It didn't work well to score it and then snap it off with the thicker plastic. When they were all cut out, I layed them on a foil lined cookie sheet and popped them in a 350 degree oven for 2 minutes. If they are curled up, leave them in the oven for another minute before pulling them out. 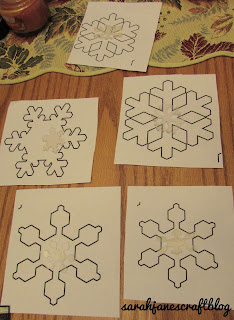 The snowflakes all shrunk a ton--almost 1/4 the original size. The snowflakes cut out of the thicker plastic didn't shrink uniformly and ended up all wonky. But the three larger snowflakes turned out great! I was worried that the intricate cuts would curl up or something would go catastrophically wrong, but for the most part they turned out perfectly. If you don't want to waste your time cutting out flakes that shrink up crooked, you might want to test shrink some of your plastic to see how it goes. 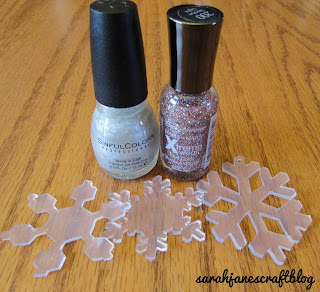 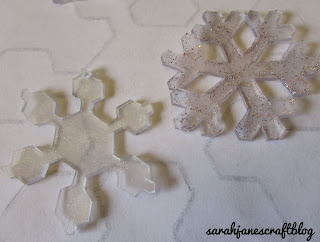 The most intricate of the snowflakes I left without adornment and the other two I painted with the glitter polish to give them a little shimmer. It was pretty minimal like I wanted after one coat--if you want more bling, try adding additional coats. 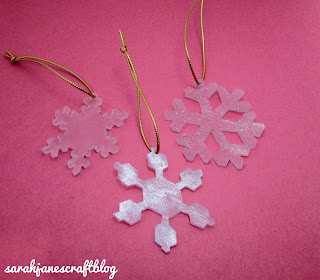 Lastly I used some gold cording to string up the snowflakes through their tiny shrunken hole punch holes. The holes were just barely big enough for this thin gold cording. Now these ornaments are ready for when I put up my tree in a couple weeks.