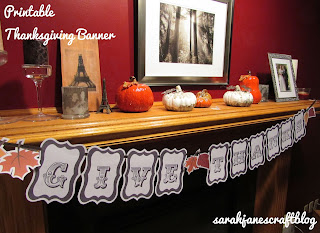 I needed a little something to decorate my mantel for Thanksgiving. It's always easy to find Halloween and Christmas decor, but Thanksgiving is often left out. Well, time to show Thanksgiving some love. I found the printable banner/garland on the At Second Street blog that read "Give Thanks." With just a little bit of tweaking, I had a great banner for my mantel. 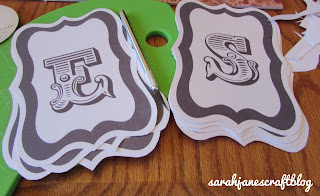 I printed out the letters (which print 2 to a sheet) on some cardstock. All I had was white, so that's what I went with. The inspiration website used some brown card stock. I used to have some off white card stock with speckles that would have worked perfectly, so just use what you've got. I cut the letters out with a scissors leaving a 1/4 inch border of white along the edge. 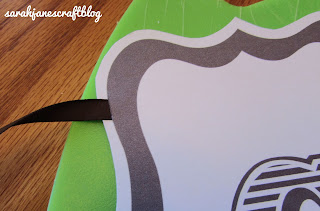 After the letters were cut out, I cut a slit along the brown border on each side towards the top with a craft knife to run some ribbon behind each letter to string it up. I'm sure there are other ways to do this, but the slits allow you to move and adjust the letters to suit your needs. I used some narrow brown ribbon, but you could make just about any kind of ribbon work. 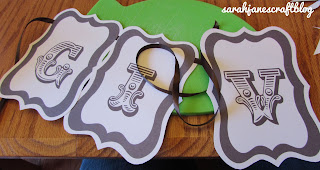 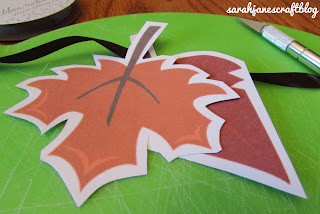 After I strung up the letters, if felt like it needed a little something else. So I went looking online to find some fall leaves that had some dark brown in them and that could be cut out with a white border around them to match the letters. I found these fall leaves. I made them a smidge bigger and printed out two sets of leaves on cardstock. I cut slits along either side of the stems to string them up between the words. To angle the leaves, I placed my leaves on top of the ribbon on my cutting board at the angle I wanted them and then poked a hole above and below the ribbon just along the stem. Then I flipped the leaf over and used the craft knife to connect the dots. 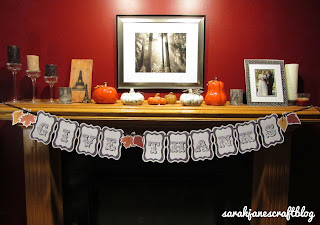 I had to unstring "Give" to get my leaves on the middle, but I think they really jazzed up the banner. I'm pleased with how it turned out, but the slicing and stringing took a bit longer than I expected, so it's a good thing that the whole project cost just a dollar or two in paper and ink.