August 24, 2015
In my continued efforts to learn how to watercolor paint, I stumbled across The Frugal Crafter's youtube channel. She's a bit overly enthusiastic, but always makes the paintings seem easy, fun, and like anyone can do it (what are you waiting for, just paint, it'll be ok). The Frugal Crafter uses a variety of watercolor paints in her tutorials, but usually the cake variety. I used my Reeves set of creme paints. The first of her tutorials that I tried was this one of some lupines.

As I stated in last week's post, I don't watch the videos while I'm painting, so I get my own interpretation of the painting. She used more water and paint on her flower petals than I did. But I liked the sort of uniformity of my little petal blotches as I was painting them. I didn't even realize how different the paintings were until I rewatched the video to post it to the blog. After watching several of the Frugal Crafter tutorials, I realized that some of the differences are probably from the brush. She uses a #10 Round brush on most of her paintings. The largest good round brush I have is a #5, and it's the one I used to paint this painting. 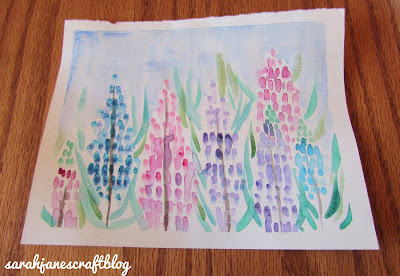 With each of these paintings, I learn a few more techniques for painting watercolors. In the lupine painting I learned about mixing and layering colors in the petals. This painting was fun and quick and made me feel confident as I painted.

This next tutorial is of a 3 color (red, blue, and yellow) sunset scene. I liked the idea of using three simple colors, and who doesn't love a sunset? 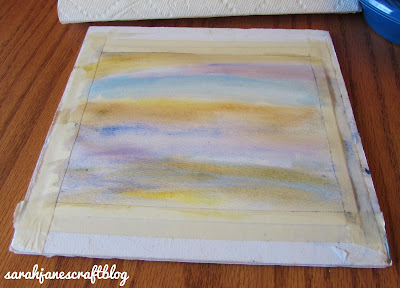 It's pretty clear that I painted this one a couple days after watching it. I also had a heck of a time getting the islands and grasses to look anything like what she had in her original painting. I don't know if that's from differences in supplies (paint, brushes, paper) or my lack of skill. 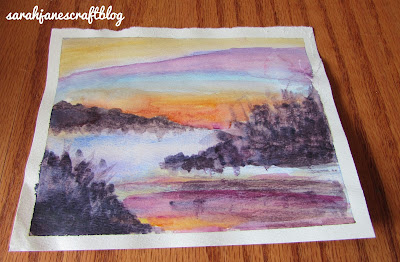 Before I was finished with the painting, I added some red and yellow together to make a more orange sunset, and I liked the way that turned out. This painting was more frustrating, but I did really like painting the sky and reflections.

This one is another flower painting (and one of the Frugal Crafter's earliest tutorials as she paints most of it upside down). 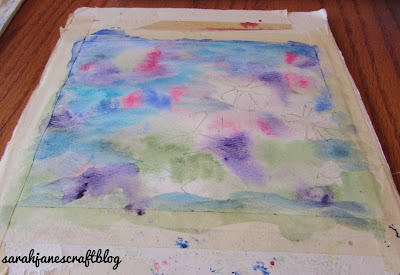 My background turned out pretty intense, but after some playing around, I didn't mind all of the colors. I added some cerulean to the background that the tutorial didn't use. 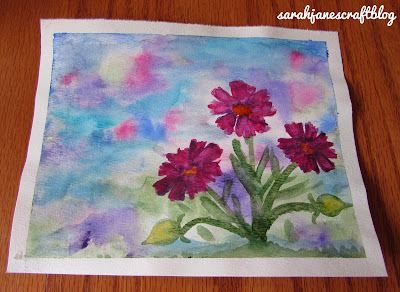 I ran into some troubles with my petals getting too close together and the colors running. She does warn against this in the video, but I was painting them days later and wasn't careful enough. The tutorial's painting does a much better job with the curve of the petals and the shades and dimension on the flower to make them look more realistic.

These paintings were fun to try, and though they weren't quite as successful as I had hoped, I keep learning new techniques. I also went to the store and bought a few more larger synthetic round brushes to paint with. Hopefully I'll be able to use them in my next paintings.
drawing and painting