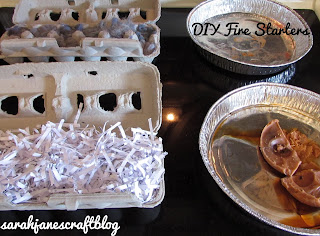 It's camping season once again, so as we plan our next trip, I decided to stock our fire bag (a sturdy tote bag that I've stocked with a plastic bag of newspapers, fire starters, lighters, matches, and a couple small marshmallow roasters) with some freshly made fire starters. I loaded up a cardboard egg carton with dryer lint for some traditional egg carton fire starters. Next I filled another cardboard egg carton with some paper from my shredder. This is a new experiment, so I'll let you know how they work after our first camping trip. You could also fill them up with sawdust if you happened to have some lying around (I do not). 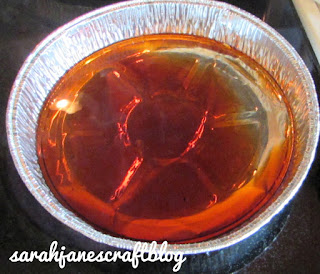 Next up, melt some wax. You could buy some wax, but I almost always have some crappy or old candles laying around. You can also pick them up at the dollar store or thrift store and melt them down. This one was a pumpkin spice jar candle from Wal-mart where the wicks burned way faster than the wax did, which left me with extra wax that I had to pour off. When I got down to about an inch left, the wicks were just in a pool of wax, so I broke the candle up and melted it down. The crappy candle gave it's life to several fire starters, so if you're thrifty like me, you don't have to throw out a crappy candle, you can melt it down and use it. I melt my wax in a tinfoil cake pan from the dollar store. It works great since it can be bent for pouring the wax and can be thrown out whenever it gets too bent or gunked up (I've been using the same foil pans for a long time though). 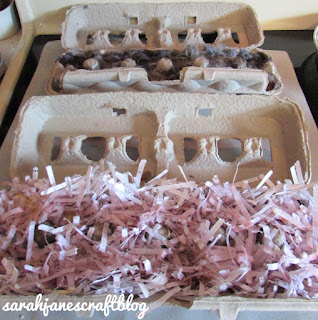 Once I had melted down the candle, I used some pot holders and bent the foil pan a bit to create a spout and carefully poured it over my lint. I melted another batch of wax and poured it over the paper. Then I melted a little more wax and poured it over any bare spots. The goal isn't to drown it in wax, but to make sure everything gets wetted down so that it becomes a solid mass and you don't have lint or paper falling out of the egg carton. Some wax will bleed through the bottom of the egg carton, so you'll want to put it on some newspaper or parchment to keep your counter or stove from getting wax all over it. I used a lot more wax on the shredded paper to try to get them all stuck together. I have no idea how well they'll work, so stay tuned.

I had a couple more small candles leftover in my stash, so I also made some cotton rounds fire starters. These don't burn for near as long as the lint fire starters do, but they are much more compact (and don't require me doing 12 plus loads of laundry to make them). All you need to do is dip the cotton round into the wax just until it soaks through the cotton.  If there's a little bit of cotton that's not soaked with wax, that's even better--they light more easily that way. The waffle textured cotton rounds work a little better for that reason, they soak up the wax really quickly and leave little bits that are unwaxed instead of turning into just a brick of wax. 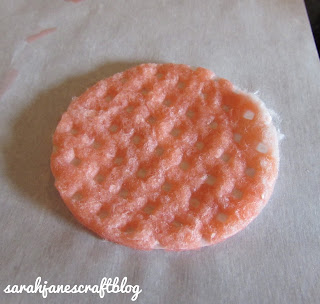 And there you have it. No need to spend money on commercial fire starters when you can make your own with stuff you are probably going to throw away (well aside from the cotton rounds, but you can make several batches of those with one bag of rounds bought for a dollar or two). 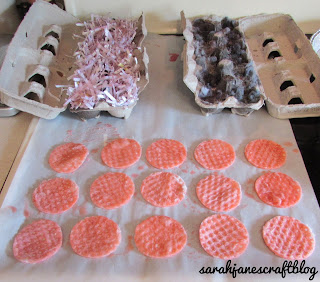