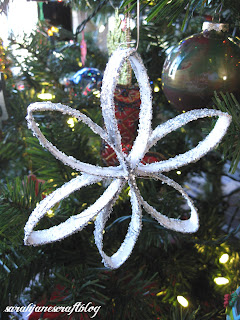 Cardboard tube crafts have been really popular on the web lately.  Last Christmas, I saved all of the tubes from the wrapping paper I used up, and chopped them into 1 inch tubes using my paper cutter. (When you cut them, they get smooshed into ovals.) After I chopped them up, I threw them in a cardboard box and shoved them in a closet, and there they sat for a year.

Last week I dug them out and made a couple of holiday crafts with them.

First off, I cut 6 (because thanks to my sister, I know that real life snowflakes always have 6 points) of the tubes in half so they are approximately 1/2 inch thick.

I then grouped 3 together and glued them at the points with a hot glue gun (you may be able to use other glue, but the hot glue gun is probably the easiest since it dries so quickly).  I had to pinch each grouping of 3 to make room for all 6 pieces.  Then I glued the two halves together at the center. 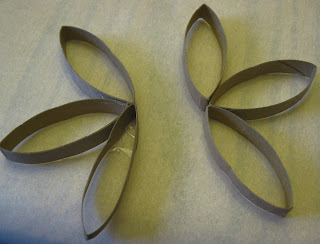 After the snowflake was glued together, I spray painted the snowflakes with cheap white spray paint. Spraying them makes any of the hot glue gun threads that you failed to clean off, pop right out against the cardboard--which makes it easier to clean them away. 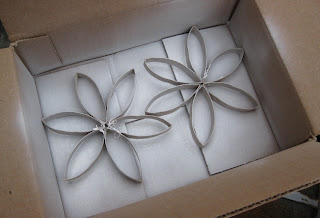 After they were sprayed white, I spread glue on the sides and top edges of the ornament and covered the ornament in silver and white glitter.  After the glitter dried, I went back over it with some mod podge so that it wouldn't shed glitter quite as much.

The finished product is definitely an upgrade to the cardboard tubes that almost ended up as trash. Hubby even gave them the "they look store bought" seal of approval when he saw them hanging on the Christmas tree. :) 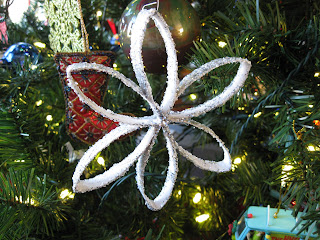