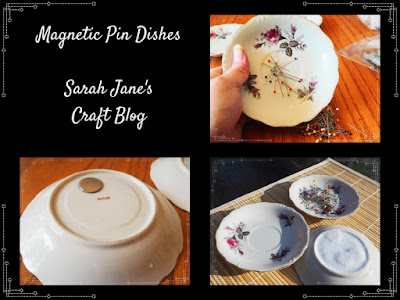 I've made homemade pin dishes before for the blog. The first time I made them, the post got picked up by some listicle websites and got extra traffic from all over the internet. So I revisited the craft a while back when I thought I found some good magnets online, since the ones from the craft store were kind of pricey. Unfortunately, those magnets were a bit small, and not strong enough. So, here I am today with a stack of saucers from an orphan set of teacups that my Grandma had in her china cabinet that no one wanted and some new magnets from Amazon. There's only one thing to do--make some more pin dishes! 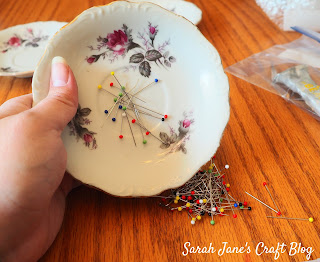 After my last batch of pin dishes suffered from weak magnets, I set about finding some larger ones to use on the back of my next set of pin dishes. I ordered these 20 mm (about 3/4 of inch) magnets on Amazon hoping that the larger size meant they would be stronger magnets. After they arrived, I set about testing them on my plates. Sometimes the plates will be too thick to effectively use a magnet on or the rim on the bottom won't be recessed enough for the magnets. These plates didn't seem particularly thick, but I held one magnet on the back and most of my pins fell off. For their size, they weren't particularly strong. But, they fit in the recess just fine. 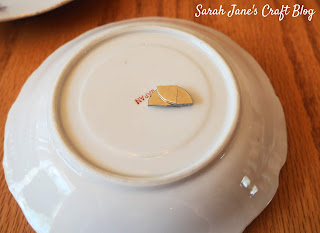 While I was testing them out, I also had one flip over and slap against the plate (because I had a stack of magnets underneath it) and it broke into several pieces. The magnets were fragile and not as magnetic as I'd expect them to be given their size. They were about as magnetic as my last batch of magnets that were half the size (10 mm).

But I figured as long as I glued a few to the bottom, they should work alright. I started out with one magnet on each plate. I glued them down using E6000 glue and waited a couple hours until they were fairly dry before gluing on my second magnet. Neodymium magnets, even the tiny little ones, have a tendency to attract each other very easily, so I figured gluing them one at a time might help with this a bit. 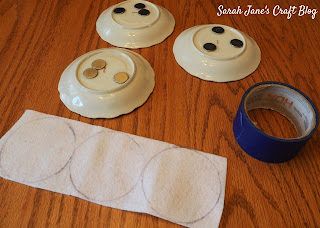 I ended up gluing 3 magnets on the bottoms of my plates. On two of the plates, the second magnet slid over to the other magnet, and I didn't catch it in time to fix it. The glue had already set by the time I noticed. But I soldiered on and glued another magnet on each and let them dry. Then I used a roll of painters tape that seemed to be about the same size as the bottoms of my plates and drew some circles onto piece of white felt. I cut the circles out being sure to cut on the inside of the pen lines so their wouldn't be any pen left on the felt circles. 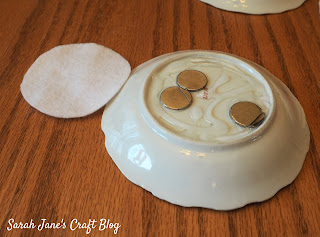 Then I added a ring of e6000 glue along the edge of the rim on the plates. I added glue to the center around the magnets and glued the felt circles onto the plate.

I glued all the felt circles onto the plates and set them aside to dry. After they had dried, I trimmed the excess felt off of the edges and they were done. 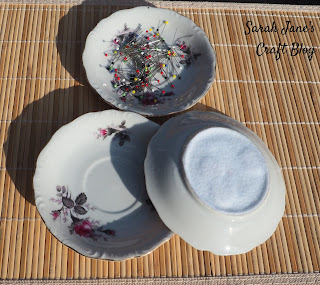 The magnets weren't quite as strong as I would have liked, but they still hold the pins to the plate. These are a fun quick craft as long as you can find decent magnets. I still haven't found ones that work better than the 1/2 inch neodymium magnets they sell at Michael's, but since those are $5 for 4 magnets, I keep hoping I can find some more economical magnets out there.