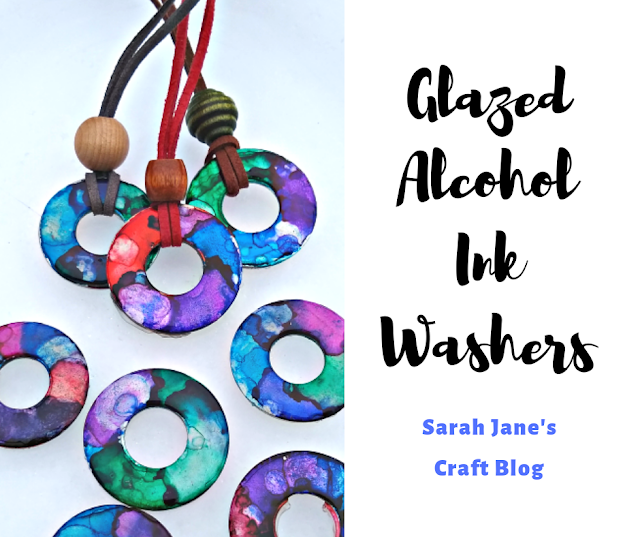 Last week on the Blog, I decorated some washers with alcohol ink and used fire to mix and set the ink. This week, I decided to use 3 different dimensional glue glazes side by side to see which ones worked the best on washers with alcohol ink. I've tried glazing alcohol ink washers in the past with mixed results, but the glues are a lot more convenient (less toxic and clean up with water) and less expensive than resin, so I keep trying to figure out how to get them to work better. 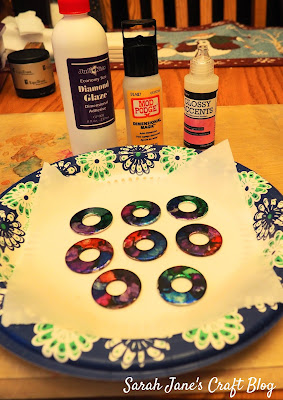 The head to head to head challenge will face Judikin's Diamond Glaze against Mod Podge's Dimensional Magic and Ranger's Glossy Accents. Before the test, I gave a thin coat of regular mod podge to each washer to keep the glaze from interacting with the alcohol ink and giving the washers all the same surface to test on. 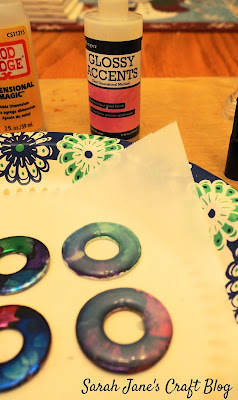 I started with the Glossy Accents. The first time I tried this gloss/glaze/glue out, it reacted with the alcohol ink a bit and the glaze turned a bit pink. I hoped that the mod podge would solve that problem. So I carefully squeezed a ring of glue onto the washer. I ended up going around the washer with the glue twice. It was not quite up to the edge, so I used a toothpick to push the glaze out toward the edge of the washer. If you push past the edge, the glue will run off the washer. As it did with the one closes to the front in the photo above.

With all of these glues use the following techniques: Do not shake the bottle--it makes bubbles. Do not pick the tip of the glue bottle up repeatedly while gluing. Try to glue it all in one stream if possible to create fewer bubbles. If there are bubbles, pop the larger ones with a toothpick and you can use a lighter to help pop smaller ones. But don't pop bubbles after the glue has started to dry--whether with a toothpick or a lighter, popping the bubbles halfway through drying will leave dents and divots in your glue. And as I mentioned above, be careful pushing the glue up to the edge of any surface, if the surface tension is breached, it will run off of the surface and the dimensional effect will be lost. 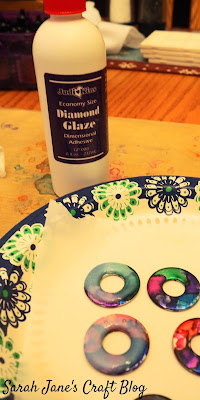 Next up was the Diamond Glaze. This mixture is a lot thinner than the Glossy Accents and has a larger nozzle (though you can buy a smaller bottle with a smaller nozzle that might work better). The thinner glue means it runs off the washer a bit more easily and had more bubbles in it. The larger nozzle meant that I only had to ring the washer with glue once. 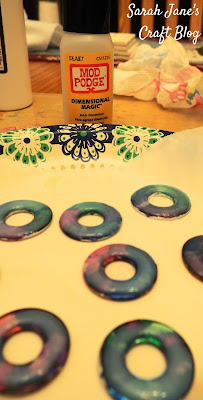 The last one I tried was the Dimensional Magic. I had problems with this one running off the washer when I first tried it, so I was conservative with the amount I squeezed on the washer and that helped a lot. Like the Glossy Accents, it had a small nozzle, and I had to go around the washer twice to get close to enough glue. Then I used the toothpick again to push it out to the edge. 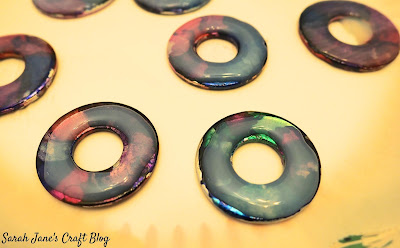 The Dimensional Magic was the thickest and had the least bubbles, so I ended up using it on the last 4 washers. You can see how it wasn't quite out to the edge at first, but I pushed it out as best as I could without getting it close enough to break the edge and run off. 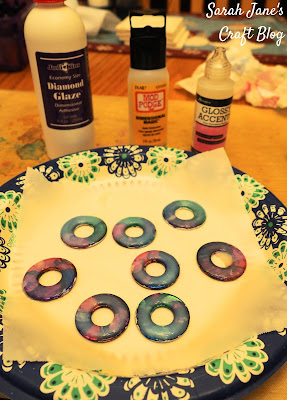 In the end, I had one of the Diamond Glaze and one of the Glossy Accent washers run off the edge. I thought that, overall, the Dimensional Magic worked best for this application. Thicker glue with a thin nozzle seems to be the best option. 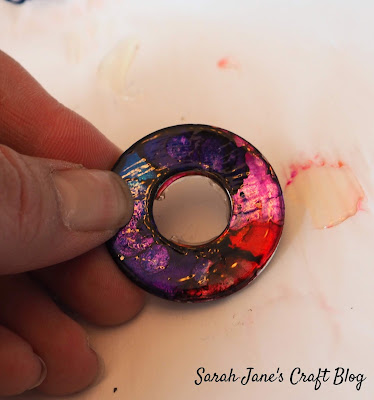 This was the washer that had Glossy Accents on it that ran off the edge. It was the only one of the washers that totally didn't turn out. The glue also managed to take some of the ink with it as it ran off even after sealing the washer with mod podge. 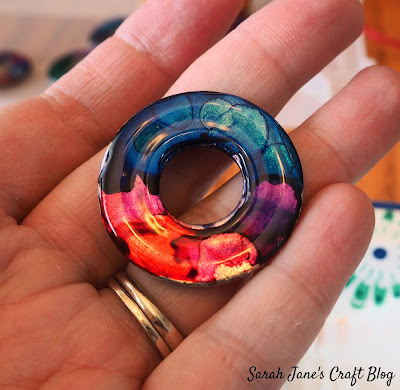 The rest pretty much all looked like this (above), regardless of which brand it came from. Application of the glues was different, but the outcome was not significantly different. Because the Diamond Glaze's thin consistency was tricky for the smooth edge-less washers and the Glossy Accents has a tendency to react with the alcohol ink, I'd pick Dimensional Magic for future alcohol ink on washers projects. With all of the glues, I'd recommend putting on less than you think you'll need to avoid the glue running off the washer. 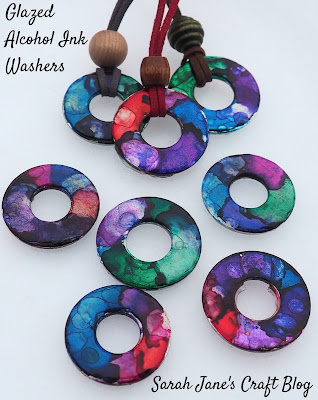 In the end, I had a bunch of great sealed washers. I strung up a few of them with some wooden macrame beads that my mom had lying around and gave to me over Christmas. They had holes large enough to string the faux suede cording through and worked great. Is there a glaze/glue I should try? I didn't have any Aileen's Paper Glaze on hand to compare--but I have tried it before. Is it worth getting more? 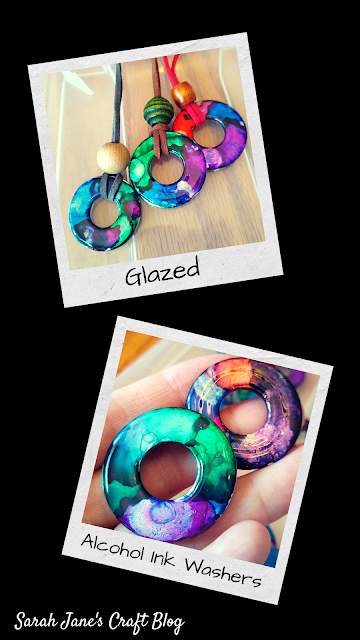