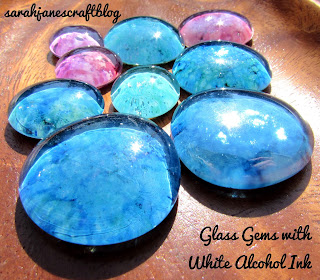 I have made my fair share of projects with those flat marbles that you can get at the craft store or dollar store. The glass gems have been glittered and backed with paper, but the most popular projects all involve alcohol ink. I have tried several different methods for making the colors stand out more on the clear surface: paint, stickers, foil tape, tinfoil....So I came up with another trick to try. I realized that the Pinata set of alcohol inks comes with an opaque white ink (Ranger has one too called Snow Cap--but it's sold individually and kind of hard to track down for a decent price). I almost always use Ranger brand Alcohol Inks as they are little thinner and easier to use (but mostly because I'm just used to them and they come in way more colors), so I hadn't even really thought about using Pinata's white one, but it dawned on me that it might be yet another way to get the colors to pop more. 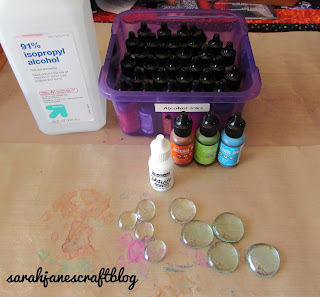 I laid out my crafting mats to protect the table and grabbed my alcohol inks and some rubbing alcohol. I selected some gems from my stash (I picked some larger and smaller ones--both of which I'm fairly sure I bought at Dollar Tree) and got to work. 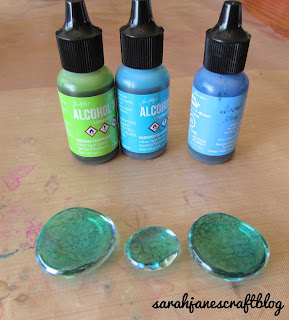 I was excited to try out some new colors that I had picked up that included a turquoise, bright green, and bright orange called Spring Break. I combined the blue and green along with some sailboat blue to create a base color on a few of the gems. I used my new orange with some hot pink to create a base on the others. As always with these gems, I drip just a dot or two of ink onto the felt applicator and stamp until the ink starts to separate a bit and create patterns. 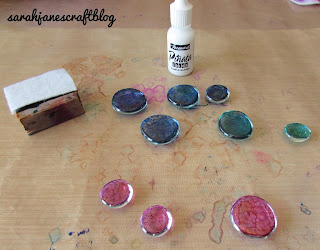 Once I had the base colors, I brought in some accents with darker colored blues and purple, etc... until I liked what I saw on the gems. Then I set them aside for a minute or so to dry and brought out my white ink. 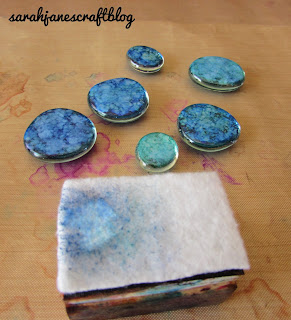 I dripped a couple drops of the white pinata ink onto the felt and stamped over the colored ink. The ink reacted much the same way other alcohol inks do, it mixed with the colors a bit. I think in the future I would use very little of the white and maybe even let it dry a bit before applying so that it would mix together less. The last gem that I applied the ink to when I was almost out or dried up on the felt turned out the best. 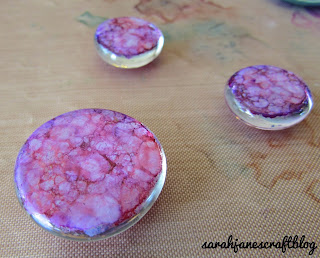 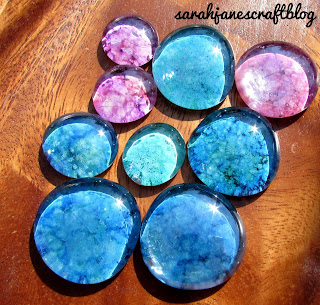 When I was done, I let the ink dry. They turned out mostly pastel in the end, but a couple of them stayed speckled. I may seal the ones that I liked the best and turn them into necklaces, or I may try this out again with a little less ink and a little more dry time between stamping to get more of a white background look instead of a mixed with the white pastel look. Let me know if you've used white alcohol ink with success in the comments! Happy crafting!