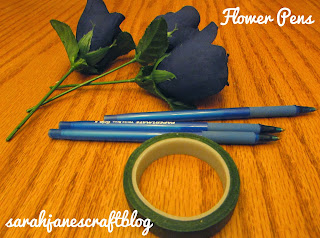 I have had these blue silk roses for a while. They were purchased with a bundle of red and white roses in the clearance section at Wal-mart. I assume they were leftovers after the 4th of July. Since they aren't exactly a natural color, I didn't know what the heck to do with them. So I decided to make some silk flower pens with them for someone whose favorite color is blue. This fall I made a whole bouquet of flower pens, but this time I'm just making a little bundle. 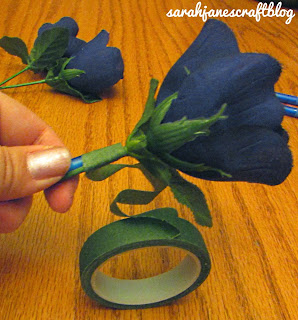 Flower pens are easy, inexpensive, and make great gifts. You'll just need some stick pens, some silk flowers, a roll of floral tape, and a scissors. Floral tape is funky stuff if you've never worked with it before. It's available everywhere that sells craft supplies, and it's kind of like stretchy masking tape, but it's not very sticky. Line the stem of your flower up with your pen and start rolling and stretching your tape over the stem--sticky side up. It's not that sticky, so the side that you peel off the roll goes facing up. It's a bit counterintuitive, but you'll get the hang of it. You may need to tear off a little piece to wrap around the stem to get it attached to the pen to start with. Since the tape doesn't stick to the pen, but to itself, make sure you start with enough tape to wrap around the pen a couple of times. 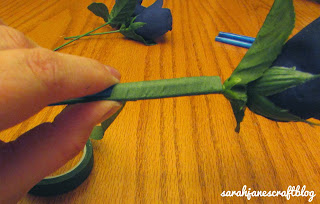 The stick pens I used for this batch of flowers had a rubber grip at the bottom of the pen, so I stopped my tape wrapping as soon as I reached the rubber grip. If your pen didn't have a grip, you can wrap the tape around the pen all the way to the tip. The added bonus of only wrapping up to the grip on these pens is that I could put the caps back on the pens. 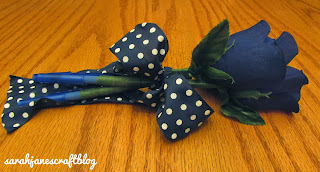 I bundled my finished flower pens up with a pretty matching ribbon and they are all ready to be gifted.