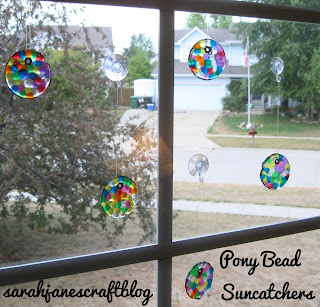 Recently I saw some really neat projects made by melting plastic pony beads (you know, the kinds kids use), so I thought I'd give it a try.  I wanted to use the tartlet pans shown in this tutorial, but alas, we don't have a Dollarama and I didn't see any at our local Dollar Tree.  So I thought I'd try using muffin tins.  All of the tutorials I had read said the plastic doesn't stick once it cools, and my muffin tin is a cheap one, so I wouldn't be out too much if I had to replace it (thankfully, I didn't). 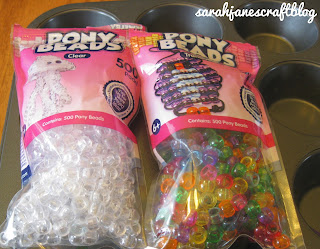 Next I picked up some pony beads.  You can get these in bulk for about 6-8 bucks a pound, but I didn't think I'd need that many, so I bought two 500 count bags of translucent beads from Wal-mart for $1.97 a piece.  I still have plenty left for another project and I won't have a ton laying around that I won't use. 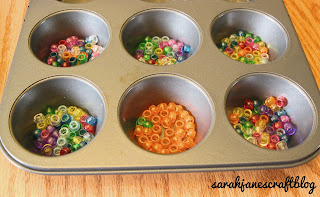 I made six little suncatchers in half of my muffin pan. For 5 of them, I just dumped some beads in it and shook it around a bit until they settled.  Then I thought I'd try making a pumpkin and made a layer of orange, then I squeezed two green beads in to create a stem.  Then I put a hex nut in each of the multicolored compartments to create a hanger for later. I didn't put one in the pumpkin as I didn't want it to mess up my stem.

I had preheated the oven to 400 degrees and opened all of the windows I could.  Then I popped the pan into the oven and set a timer for 20 minutes.  I peeked at it a couple of times to make sure nothing was smoking or that it wasn't melting much faster than anticipated. After about 10 minutes, it got a bit stinky from the plastic fumes. When the 20 minutes was up, it was still bumpy looking, so I left it longer and checked on it a few more times before finally pulling the pan out after about 30 minutes. 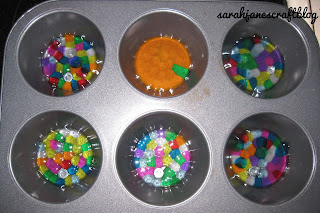 I left the pan on the stove to cool for about an hour (they might have been cool before that, but I was waiting for the fumes to subside in the kitchen).  I could hear them popping and contracting as they cooled. When I went to take them out of the pan, I was worried for a second, but then they just slid right out (Yay for the cheap non-stick finish!).  There were some bumpy/spiky edges, but I was able to grind them down with my dremel.


Then I strung the colorful ones up with some fishing line and hung them in a window with some suction cups. The pumpkin turned out kind of cute, but without a hanging hole, I'm not sure what I'm going to do with it yet. Aside from the smell, this was a super easy craft.  They were fun to make, and I can't wait to mess around with the process again.  If you decide to try it, just be sure to open your windows! 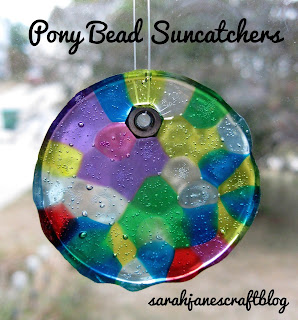