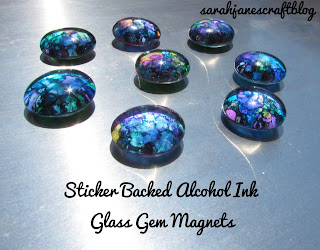 Decorating glass gems with alcohol ink is one of my most popular projects on the blog. I've been fine-tuning my process and trying out a bunch of different variations. One of the biggest issues with using alcohol ink on glass gems is that you can't really see the colored ink, it gets a bit lost as you look through the gem at the colors. One way around this problem (or to at least diminish it) is to back the glass gem. I've tried paint, aluminum foil, and aluminum tape. All have worked, but the easiest was the aluminum tape. I punched circles out and placed them on the back of the gems like stickers....so it donned on me as I was looking at some basic office supplies--3/4 inch color coding stickers--that the white back of stickers would be a great way to bring out the color in my glass gems. 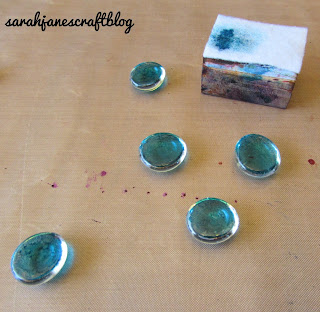 I started by laying out a craft mat and my alcohol inks, and I cut up a bunch of squares of felt for my applicator as I knew I'd want to change colors several times. I grabbed some regular glass gems/flat marbles  (like the kind sold in the floral section at craft stores--they are about 3/4 of an inch in diameter). I would have liked to use the larger gems as they make better jewelry, but the standard stickers were too small. I started out with some green/blue ink. As you can see on the applicator, there's only a very small amount of ink--just two drops. The more ink you use on these glass gems, the wetter the felt is and the longer you have to stamp/let it dry before you get the ink to start separating a bit and making patterns. 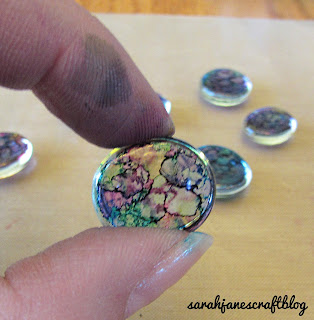 After the gems were colored in a base coat of the green/blue, I started adding colors to the gems. I'd drip one or two drops of color onto the clean side of the applicator and stamp until I'd get colors that I'd like. I ended up layering several colors to get it the way that I liked it. Some blue, some light green, some yellow, some purple, some pink--you get the idea. I just kept putting color on until I liked it. 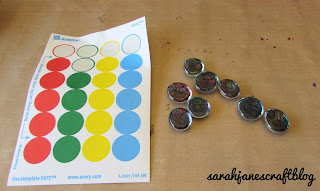 When I was satisfied with the colors, I let them dry for a few minutes before applying my stickers. I used the blue and green stickers since they corresponded better to the colors on the gem. 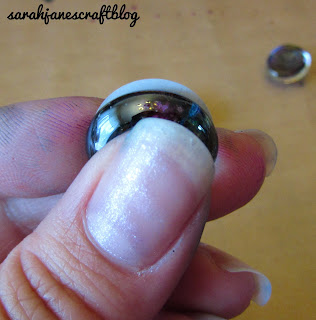 The stickers fit some of the gems perfectly, but others that were more oval in shape had some overhang. I just stuck the sticker onto the gem and then carefully trimmed the excess with a scissors. 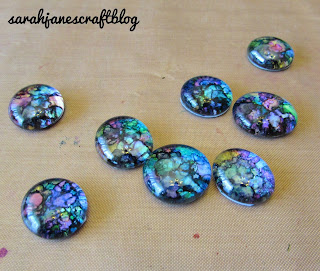 I was pretty pleased with how bright they looked after the white sticky backs of the stickers created a contrast against the inked colors. 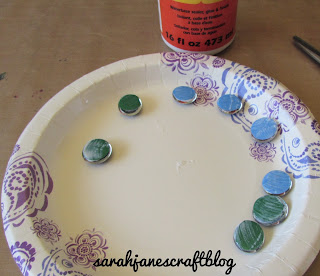 To keep the stickers from peeling up at the edges and to seal the paper so that it wouldn't come off if it got wet, I went ahead and painted on a coat of mod podge with a foam brush. 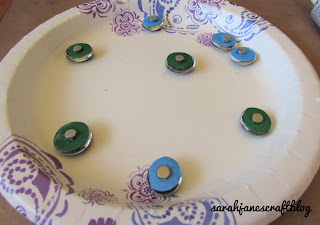 Then I used some E6000 to carefully glue on some tiny neodymium magnets (Note: this kind of magnet is very strong, and these small ones can be deadly if swallowed. Do not let kids play with them.). Be careful when you're gluing them onto the backs of the gems not to let them get too close to each other (the ones on the top right were too close and pulled their magnets out of the glue and had to be re-glued).  Though the neo magnets can be a bit of a pain, they make fantastic fridge magnets. They hold papers up so much better than the standard craft magnets. 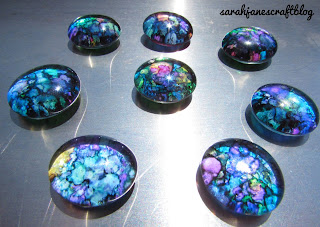 In the end, I was really happy with how the colors turned out when backed by the stickers. If you pick your largest gems out of the stash, the stickers should fit the backs pretty well too. I'd definitely do this again. Now I just have to find some stickers the right size for my larger gems.