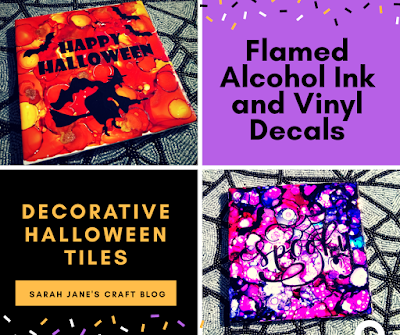 If you follow this blog, you know that I'll find just about any excuse to put alcohol ink on something, and lately, I've been really into lighting alcohol ink on fire. It creates such vivid and interesting patterns in the ink. So when I decided to finally dust off my Silhouette Cameo, I opted to make some Halloween tiles with flamed alcohol ink and vinyl decals. 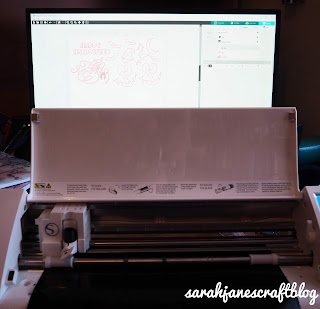 I'm a total beginner when it comes to the Silhouette, but this week I learned how to turn photo files into Silhouette files using the trace option. As long as you pick simple silhouette style (go figure) clip art type photo files, it's super easy, and addicting. So I knew it was also time to learn how to cut vinyl on the darn thing. I bought a roll of black vinyl right after I got the machine, figuring it would be good to have around, but I never used it. Cutting vinyl is actually easier than cutting paper since you don't have to mess with the cutting mat. You just load your media instead of the cutting mat, set it to the vinyl cut settings, and cut your design. It was really easy and gratifying. 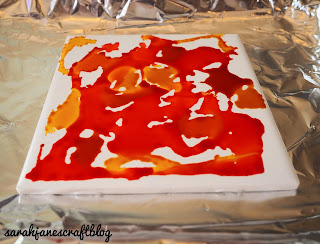 After I had cut out my Halloween designs, I got to work creating something pretty to stick my vinyl on. I set up my alcohol ink flaming station for my 6 x 6 ceramic tile with a cork trivet, a cookie sheet covered in tinfoil, and a long handled lighter. Clear away anything flammable from the area and drip ink on the tile. 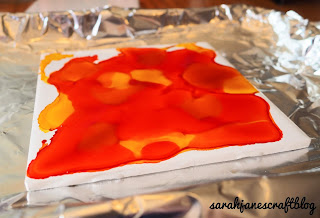 It's hard to tell from the photo above, but this amount of alcohol ink flamed quite a bit. The flame often burns blue or a very light yellow and is hard to see, so watch the ink moving and drying to see when it stops flaming, you can't always see the flame well. Do not add any more ink until it stops flaming. 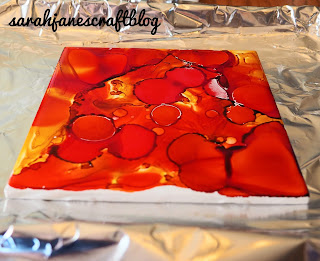 Once I was certain it had stopped flaming, I added more drops of ink and lit them on fire. 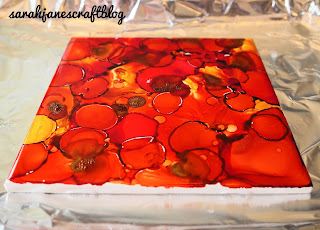 I decided to try a bit of gold ink to jazz things up. There are more solids suspended in the metallic inks and I learned that they do not flame at all like the regular ink. They bubble and boil and spurt a bit and they burn instead of spread out. So I would not recommend using the metallic inks for flaming. 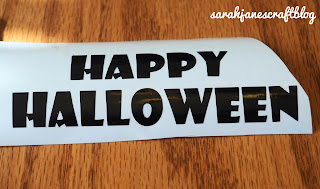 After I felt good about the alcohol ink, I weeded (that's what it's called when you pick all the little bits of vinyl and paper out of the letters and designs made with a digital cutting machine) my Halloween logo. 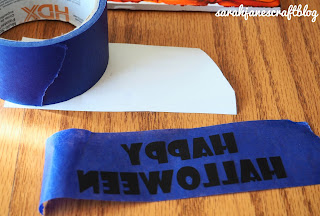 Since I'm a beginner, I didn't know to buy transfer paper or tape for the multi-part vinyl decals, so after some research online, I decided to try painter's tape. I laid it down over my design and burnished it with a plastic dish scraper to make sure it stuck to every letter. then I peeled it carefully off the paper backing. It worked great! 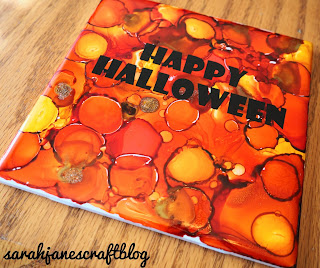 Then I flipped my tape over and applied it to my ceramic tile. I burnished each letter again with the plastic dish scraper and then carefully pulled the tape off the tile. The letters stuck and the tape didn't. 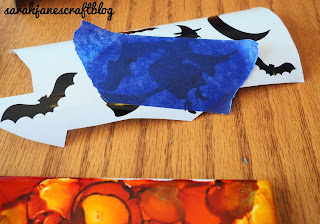 I had a witch and some bats to add to my design. I peeled the bats off and applied them like stickers, but the witch had some little bits that I wanted to peel off more carefully, so I applied some tape to her and burnished the tape over the edges. I should've covered the whole design, but even this little bit of taped helped make it easier to peel off and apply. 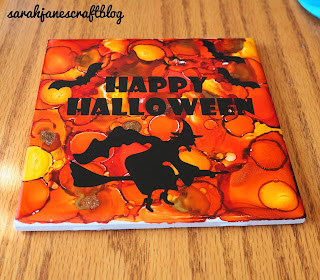 When it was done, I had a tile with a decorative orange background and black decals. I turned out great! 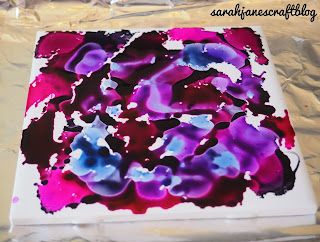 I had another decal that I wanted to apply, so I got to work decorating a second tile in purples. 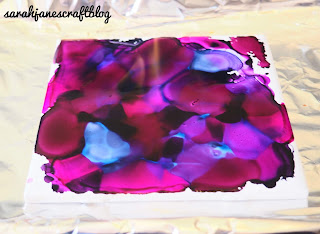 You can just barely make out the flame in the photo above as the ink mixes together. 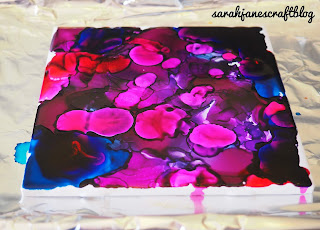 I continued applying ink and flaming it until I liked the way it looked (a bit after this photo of the tile above in a similar process to the orange one). 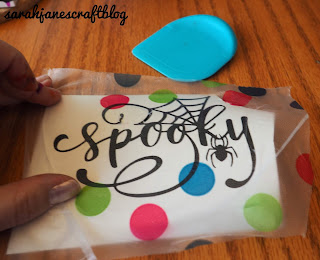 My decal for this tile was one piece, so I weeded it and then decided I'd try another type of transfer paper hack I read online--Glad Press and Seal. And while I think this stuff is great for covering leftovers, I do not recommend it for transfer paper. It isn't quite sticky enough, so you have to burnish it a lot to get it to peel up the design, in the process, I tore the plastic and stretched out one little end of my decal. Also, the press and seal left residue on the glossy vinyl. So if you don't have transfer paper, stick with painter's tape. 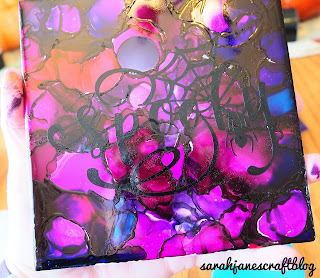 I did eventually get the decal on the tile, but between the issues with the press and seal and the ink design being a bit too dark to see the decal clearly, I was tempted to throw in the towel. 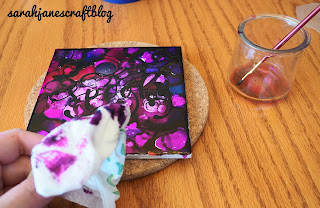 Instead I got out a little paint brush and a jar. I filled it with a bit of rubbing alcohol and dabbed the rubbing alcohol onto some of the dark areas around the decal and some of the places the ink got a bit dark from flaming. I then used a napkin to dab a bit of the ink off the tile. It was kind of like removing excess watercolor paint from a painting that got too dark. 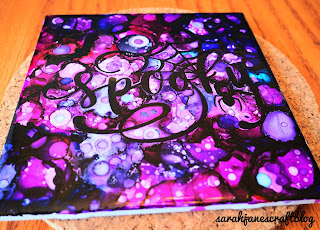 I removed and dropped alcohol all over the tile until the design looked speckled and much lighter. It's still a bit dark (and busy) to see the vinyl decal clearly, but it looks much better than it did when I first applied it to the tile. 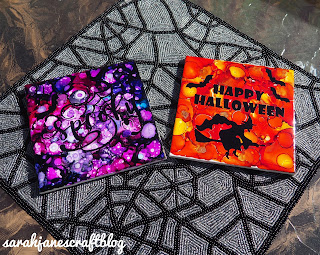 In the end, it was a success. I have two cool looking tiles, and I learned some new skills for using my cutting machine.