This is a very easy project to take something that would have ended up in the recycling bin and create something useful.


You Will Need the Following:
One empty Crystal Light Container
A piece of scrapbook paper
Glue--I used Mod Podge
A foam brush
Neodymium magnets and glue to attach them 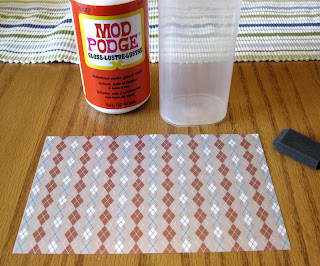 I used my paper cutter to cut a piece of paper that was 5 inches tall.  I then wrapped the strip around my container and marked where it would overlap just a tiny bit and cut the excess off.  I then brushed Mod Podge onto the paper and carefully applied it to the container making sure to line the seam up on one of the  flat sides. I put some extra glue along the seam.  If you want a really secure and water resistant covering, you could take the time to cover the whole container in a couple of layers of Mod Podge.  I opted not to since this scrapbook paper has a bit of a sheen to it that would have been dulled by the Mod Podge (and this was faster). After the glue dries, attach your magnets to the back of the container with some E6000 or hot glue. 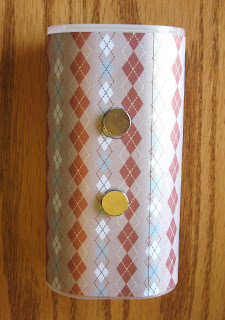 I tried it with just one magnet, but it slid down the fridge.  Two of these strong neodymium magnets was just right.  And now I'll always know where my scissors are. The next one I make may include trim or other decorations--but this proof of concept works perfectly.  I always love making something useful out of trash! 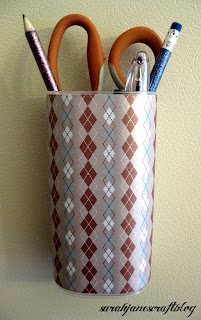 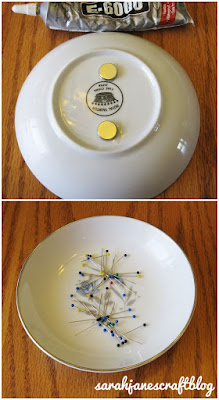 As soon as I saw a photo on Pinterest showing a magnetic pin dish made out of a pretty old dish from a thrift store, I knew I wanted to make one.

From then on, I was on the hunt for the perfect plate or bowl that would work for this project.  I had a list of criteria for the dish:

It needed to cost less than a dollar, have a bit of a lip around the edge so that pins couldn't be bumped off the dish, be pretty to look at, and have a little ridge on the bottom so that it would still sit flat after I glued the magnets on.

I finally found this beauty for 79 cents at my local goodwill that met all of the criteria.

I used two neodymium magnet that I picked up at the craft store (ones like these from Michael's) and glued them to the bottom of my dish with E-6000 glue.  After a few minutes of drying, I was able to put a handful of pins in the bowl and turn it over without any falling out.  Of course, your results may vary based on the strength of your magnets and the thickness of your dish, etc....test them out before gluing and you should be good to go. 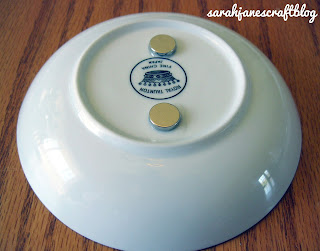 The result: a pretty, inexpensive, and very functional pin dish. 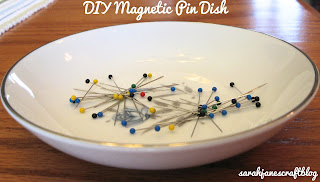 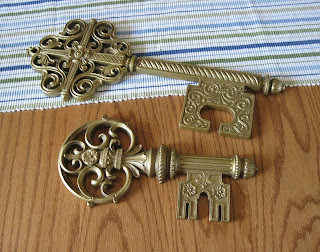 I'm proud to share with you my very first thrift store redo.  I love going to thrift stores, but I rarely find decor at thrift stores that isn't terribly outdated.  I have seen some adorable projects from people taking things they find at thrift stores and painting them or deconstructing them etc...so when I saw these keys, I thought I'd give it a go.  These light plastic key wall hangings were originally done up in this lovely outdated gold/brass finish..  I thought they looked a little steam punk-like and that they had some potential.  The larger key is about 2 feet wide and cost $1.99 and the smaller one was marked at 99 cents.  With only 3 dollars to lose, I took the gamble.  My first thought was to spray paint them.  A good coat of black spray paint would hopefully help them blend in with a more modern decor and play down some of the ornate details a bit.  So that's exactly what I did. 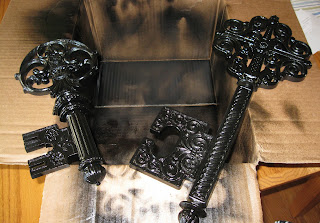 I propped them up inside a cardboard box and sprayed the crap out of them with a can of black Krylon.  It took several trips to the deck of spraying and turning and letting them dry, but when they were all finished, they turned out much better looking than the original...and darn cute for $2.98 plus spray paint. 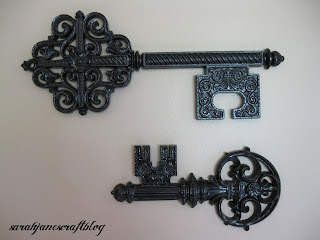 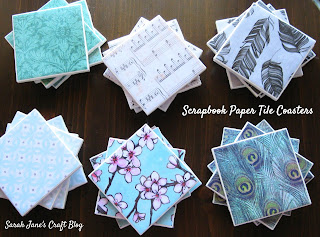 I made a new batch of ceramic tile coasters covered in scrapbook paper. For a full tutorial, check out my earlier post here. But it's really as simple as cutting your scrapbook paper to size, decoupaging it  it on the tile with mod podge, and then gluing (with hot glue or tacky glue) some felt on to the back of the tile. 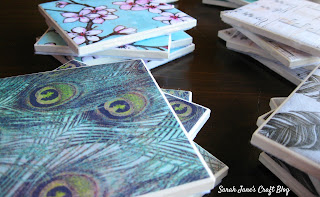 These are really fun to make, and if you have a steady hand (or a paper cutter) they turn out really professional looking! 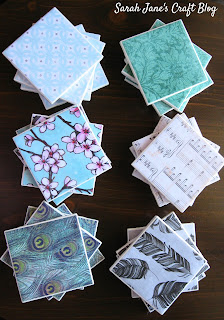 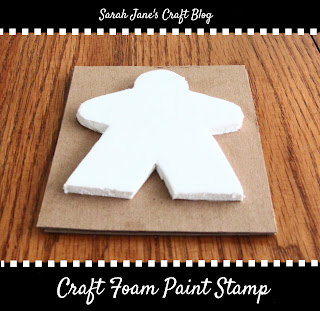 This super simple project is full of potential. Buy a sheet of the extra thick craft foam from your local craft store (you may be able to laminate the thin stuff together with a strong but flexible glue, but I haven't tried it). 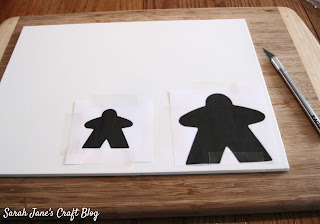 Next, carve out your design with a craft knife and use a small pair of scissors to smooth out any ragged edges. In the photo below, you can see how it was not a very clean cut on the curved arms of my meeple pattern, so I cleaned that part up with a small sharp scissors. 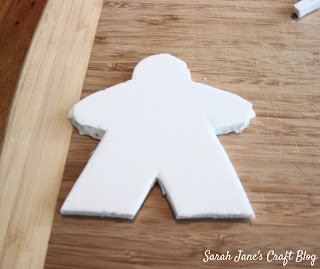 Once you've cut out your shape in foam, glue it to a very thick piece of cardboard or a scrap of wood. I laminated some thick non-corrugated cardboard together to make my stamp and it's held up to being painted and washed off a couple of times without problems. 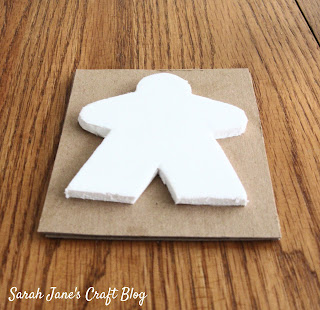 Once the stamp is done, go to town with your paint.  I used mine to make some homemade gift wrap out of brown craft paper from the dollar store and some leftover craft acrylic paints.  Cheap, quick, and totally customizeable! 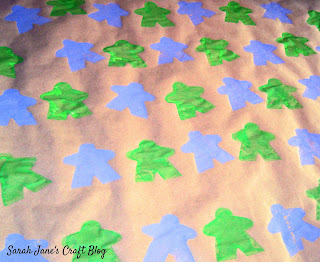 I can't wait to make more stamps with fun foam. You can make pretty much anything you can think of. 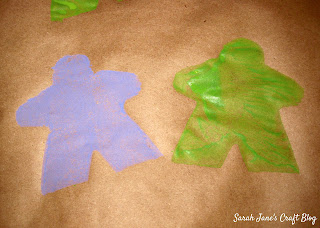 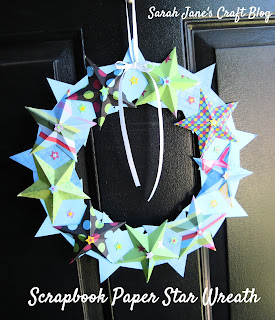 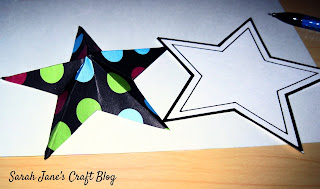 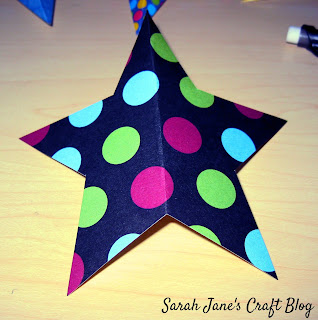 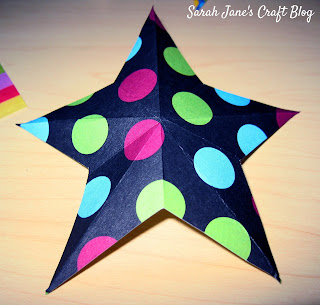 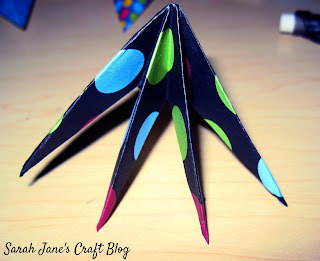 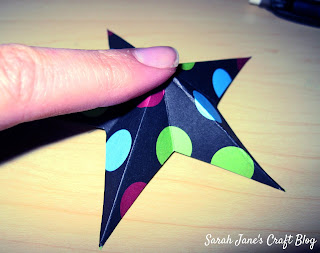 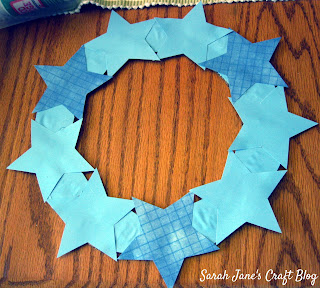 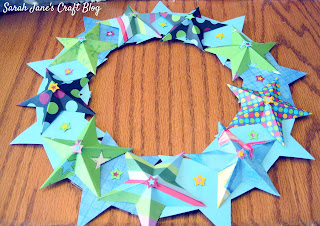 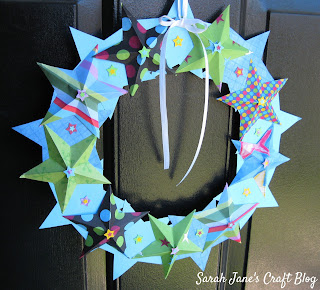 Posted by Sarah Jane at 7:34 PM No comments: